The Airport as an Expression of a City's Aspirations

The opening credits in the recent film, Up in the Air features a montage of American cities as seen from the air.

The aerial view may be a traveler's first glimpse at what the immediate future holds. But it's probably the airport experience on the ground that cements a traveler's first substantial impression of a city and its merits, whether premature or otherwise. That experience - the flow, sense of efficiency, and all the small details enabled by the airport's architecture - can be viewed as an expression of what the city stands for, or what it aspires to be. In a post written by Kenya Hara, art director at MUJI and professor at the Musashino Art University in Japan, he notes how aspects of Tokyo's airport capture some essence of the Japanese spirit:

When coming back to Tokyo from abroad, my first impression usually is: What a dull airport! And yet it’s clean, neat and the floors deeply polished. To the Japanese eye, there’s a particular sense of beauty in the work of the cleaning staff. It’s in the craftman’s spirit — “shokunin kishitsu” — which applies to all Japanese professionals, be they street construction workers, electricians or cooks.


For those investigating emerging cities and the development of ecosystems to support the cities' entrepreneurial ambitions, the experience at the airport is almost an initial barometer for things to come. It provides first impressions that give foreign investors and venture capitalists an inkling to local economic conditions and the state of political will for development. And ultimately, they are first impressions that could inform answers to questions such as: What is the state of infrastructure in this city? Would it be easy to attract global talent to this city? How are local policymakers thinking about trade and business?

I find myself returning Hong Kong's Chek Lap Kok Airport as an exemplar of a seamless end-to-end airport experience. From the experience within the airport confines -- the speed and efficiency of its baggage lines, immigration queues, internal trains, human traffic flow, staffing -- all the way to the convenience of commuting by way of an express high-speed train that takes you directly from and into the heart of the city (and thereby Hong Kong's economic pulse) in a mere 20 minutes, the airport lives up to Hong Kong's creed of being "Asia's World City." The architecture of its airport and the airport's relationship to the city reflect Hong Kong's openness and accessibility, both physically and figuratively (i.e. "it's easy to do business here, and we're a springboard to the rest of the continent").

However, there can be a dark side to the infrastructural and architectural showcase as an articulation of an emerging city's ambitions.

The Kuala Lumpur International Airport (KLIA), a stunning architectural delight, was built amidst a climate of national optimism, in anticipation of Malaysia taking the world stage and playing host to the sixteenth Commonwealth Games. Some have argued that the airport has since effectively become a white elephant. The costs incurred in upkeeping under-utilized infrastructure that can't be easily repurposed are particularly worrying for developing cities.

Infrastructural undertakings cannot be motivated solely by edge cases (such as hosting mass-scale sports events such as the World Cup or the Olympics) as they lead to unsustainable outcomes. It's undoubtedly a difficult equation to balance: On one hand, a forcing function like a high-profile sports event brings with it the responsibility to uphold a nation's image in the world (i.e. "yes, we're ready for this - just as we had promised when we stepped up to take the job"). On the other, there is the economics in the aftermath of accommodating a one-time demand without a more organic, long-term need at quite the same scale. I'm curious to learn more about how a post-Olympics Beijing has dealt with this issue -- and how South Africa will attempt to balance this conundrum with the upcoming 2010 World Cup. 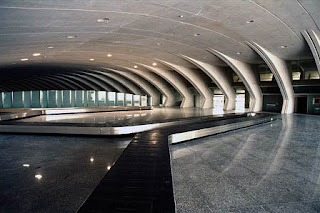 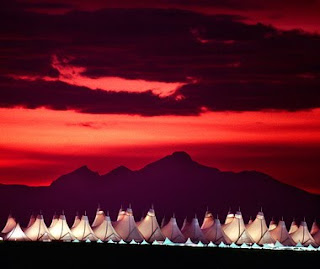 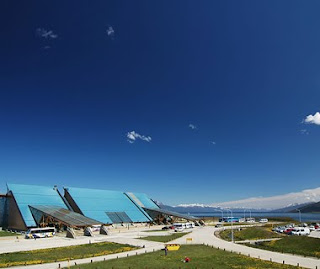 
More snapshots of architecturally interesting airports at Flavorpill and Travel+Leisure

Credits: Images from Flavorpill and Travel+Leisure. Video from MakingOf.com.