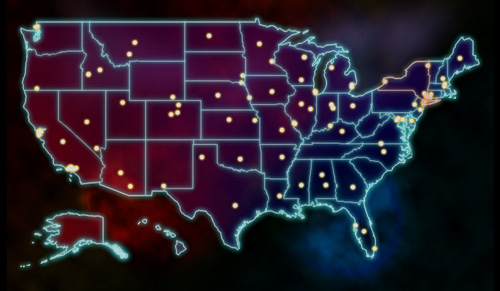 Part of the intrigue of a city is the layers and texture of its sound. Each region tends to contain a degree of variation that reflects the uniqueness of its inhabitants. As a way to capture these moments of our lives, the Smalls, an independent film and music curator and promotor, has recently launched an interactive sound collaboration project on the web.

The Sound Map is an interactive tool developed specifically for The Smalls Street Sounds, which invites the public to share the sounds of their environment by uploading their own recordings, along with a brief description and a picture. These recordings can be anything from the rumble of the local train to neighbors speaking in a foreign language, or the sound of kids playing baseball in the neighborhood park to a protest demonstration or simply the sound of the wind in the trees. Uploaded sounds are made available to other users of the Sound Map, and users can easily search for inspiring sounds via keywords or by navigating the map geographically.

The site has just entered its second phase and opened a call for entry for its filmmaking competition. Using sounds shared on the site, filmmakers, artists, and musicians are invited to make original short film inspired by one of the competition's four themes. The deadline for entry is March 26, 2010.

Credits: Image from The Small.