Cities have provided people with inspiration and opportunity throughout history. During a recent trip to Ottawa I was able to experience how Canada's capital is offering it’s own inspiration for a planet under siege by traffic congestion and global warming.

Ottawa is home to a number of iconic cultural and historical sites, including the world’s longest skating rink, the Rideau Canal. The canal was opened in 1832 after growing concerns over Canada’s military strength and vulnerability during the War of 1812. An artificial waterway was required to provide a secure supply route between Montreal and the naval shipyards at Kingston. The solution was to construct a 202-kilometer (125 mile) canal that would bridge the gap between Ottawa and the foot of Lake Ontario. 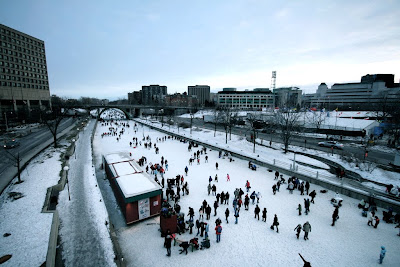 Since 1971, during the winter months a “small” section of the canal has been groomed for use as an ice rink. The frozen 7.8-kilometer (4.8 mile) artery acts as a tourist destination, recreation venue, and more interestingly, a commuter "skateway" for local residents moving to and from work, school, and downtown facilities. The canal freezes naturally into a 30cm (12in) - thick sheet of ice, providing secure structural support for thousands of skaters. The ice is flooded and groomed through a series of holes punched through the surface, making use of the water below. The morning rush hour is cold, although active, as workers, university students, residents and visitors glide along the historic canal to the office, classroom, or downtown café.

Although commuter usage is not exactly high, the venue provides for an interesting alternative to the car, bus, bicycle, and even running shoe. Northern urban centers with historic canal systems should take note.