By the Time I Get to Arizona

Yuma, Arizona is a border city in multiple ways. Google's satellite imagery captures much of it - the line between the actual desert and the irrigated one; the wall between the actual Mexico and the former one; the space between the Golden State and the Grand Canyon state. It is a fitting place to enter the incongruity that is urban Arizona, a hyper-modern state that seems stuck in the Reagan era. 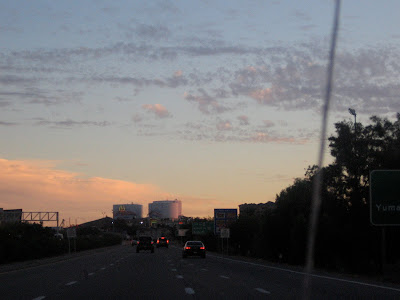 Tucson is at the heart of the southern swath of blue which sandwiches the redness of greater Phoenix, a multi-flavored politics which makes Arizona undoubtedly purple, John McCain and Janet Napolitano par example. There is a touch of both old and new urbanism to Tucson, historic buildings that mesh with renovated adobe and the funkiness of the overgrown college town which it tends to resemble. But it is the street which one notices right off the bat - every one of them, even the smallest of side streets, seems big enough to park a semi at a 90 degree angle. 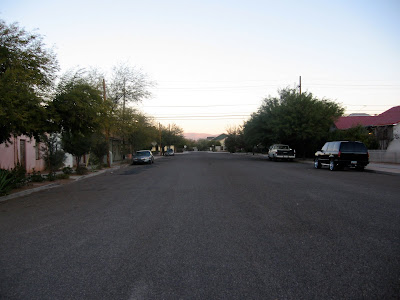 It would make sense if the streetscape in urban Arizona was designed around large SUV's, for they are so ubiquitous that the shift from the bourgeois bicycle and Prius roadways of Oakland is stark. When combined with Styrofoam plates and intermittent recycling, it feels like being transported back in time.

Yet nothing in Tucson can truly prepare you for Phoenix, an almost legendary multiheaded metropolis with astronomical population growth and enough Boomburbs - i.e. Mesa, Chandler, Glendale - to keep Robert Lang in business for decades. The city grew by a million people between 2000 and 2008, a growth rate set decades earlier when Phoenix spent the last 20 years of the past century as one of fastest growing metro regions in the nation. There is a potent mixture of sadness and irony that Detroit lies just one spot ahead of Phoenix in the rankings of largest US metros (11th and 12th respectively), and one can imagine where that is heading. 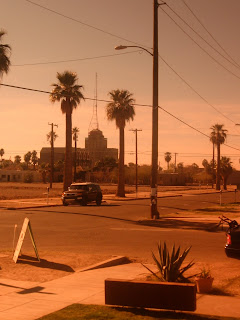 Or is it? Phoenix, despite it's truly marvelous freeways (driving on them is like butter; I think they have redefined merging), the Phoenix miracle has hit the skids. There is talk that population growth may actually be declining, hammered by a skyrocketting foreclosure rate and an economy seemingly built on the building of Phoenix. It's dependency on automobile transport (less than 2.5% of workers commute via transit) and the construction economy (more than 10% of the workforce, not including all the real estate and mortgage brokers now looking for work) have left it vulnerable as the "Ponzi scheme that works" seems to fall apart at the edges. While the supposedly modern Los Angeles works to reinvent itself yet again as the next American metropolis, Phoenix, the true post-war city built on cheap flat desert land around a magnificent grid of freeways and affordable subdivisions, may be running aground. 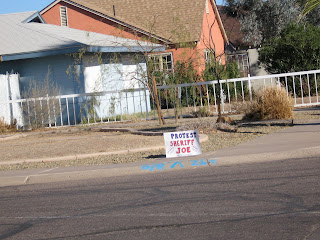 Yet all is not necessarily lost. Hidden between the spectacular mountains and smog-chocked skies are the odd green shoot of a new city, a potentially bikeable city with a fledgeling light rail system, a few smidges of anti-corporate culture and a legitimately fantastic public art scene. There is even the odd protest of Maricopa County's proto-fascist Sheriff, Joe Arpaio, a fact that must be taken alongside events such as the recent Scottsdale Tea Party rally in favor of coal-fired power plans and against emissions rules. If another city is possible, let's hope it manages to get to Arizona, or even better, that Arizona manages to reinvent itself.