Jižní Město, meaning South Town in Czech, is a sprawling housing estate of large, chunky apartment buildings colloquially known as panelák at the southeast end of Prague’s red metro line. Planned in the 1970s, it is a quintessential example of housing estates built in the Czech Republic and Slovakia when the areas were under communist rule. Jižní Město is indeed famed as the largest panelák housing estate in Prague, with 200 buildings built since the 1970s.

Walking through the area, the landscape is dominated and even absorbed by panelák, these blocks of high-rise panel buildings constructed of pre-fabricated, pre-stressed concrete. The buildings remain a towering, highly visible reminder of the Communist era, built after World War II with the goal of solving, efficiently, the pressing housing shortage. Indeed, panelák are in no way unique to the Czech Republic or Slovakia but were built in all communist countries, from Poland to Mongolia. According to census statistics, roughly a third of all Czechs (3.5 million people) and half of all Praguers live in paneláks.

While about 80,000 people currently live in Jižní Město, the fact that only a few thousand workplaces are located in the area makes it popularly known as ‘Prague’s bedroom’. During my visit on a cold winter day last week, I saw several children skidding across the new fallen snow in the open spaces in the middle of the complex, an area between the metro stops Háje and Opatov known as ‘Central Park’. Yet Jižní Město in its totality gave me a feeling of emptiness, a sparse and forlorn development devoid of soul or vibrancy. There are no pedestrian-accessible shops for people living on the estate, looming structures that have no human scale abound and several abandoned, squat structures dot the area. 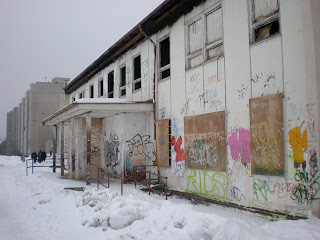 Interestingly, the French social anthropologist Laurent Bazac-Billaut carried out an ethnographical study of panelák dwellers, specifically in the Jižní Město housing estate. Bazac-Billaut concluded that, despite the clichés about the anonymity of the over grown 'rabbit hutches', the quality of life on panelák estates is often better than it might first appear: people generally know their neighbours, social networks exists and public transport runs regularly.

A major finding of Bazac-Billaut's research is that panelák life is based on an intense drive for privacy and individuality. He notes that inside the standard panelák flats, identical in layout and to thousands of others the length and breadth of former Czechoslovakia, the key impulse of Czech panelák residents is to create their own private worlds.

For me such information begs the question, how can such individuality and a warm or inviting sense of place one finds in a home environment be brought into the surrounding urban fabric? The Czech urban philosopher Václav Cílek has advised the best way to revive the country's panelák neighbourhoods is by filling in the existing dead spaces, for example introducing variety through building lower structures among the high rises and opening shops on the floor level of buildings to help create street life. Plans exist to revitalise Jižní Město and many other housing estates across the Czech Republic, and it will be interesting in years to come to see how the multiplicity of challenges brought by the looming panelák forms are addressed.