‘Libro al Viento’ (Book on the Wind) and Other Mobile Books

Recently, while taking the Bart, I found a new type of public library in the Cerrito Station. It is a book vending machine called Library-a-Go-Go which caries about 400 popular titles. You just have to be a member, swipe a card and your commute becomes more pleasant. This library system operates in transit stations, shopping malls and under-served areas in the suburban landscapes.

The model for these book vending machines was created in Sweden, but one can find other innovative public library systems for mobile people all around the world. Santiago, Madrid, Sao Paulo and Bogota have the bibliometro (metro-library) or biblioestacion (station-library) in busy transit hubs. These public libraries are larger than the vending machine carrying around 1500 books and are also much more personalized. The goal for these libraries is to give access to books to everyone. 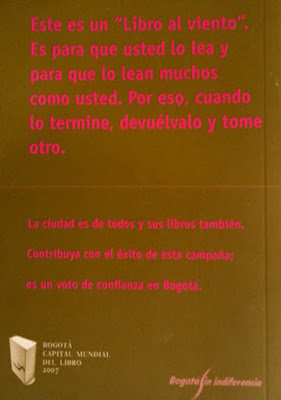 In Bogota, millions of books circulate around the city through the Transmilenio, the well-known BRT through a different program. It is called "Libro al Viento" (books on the wind) and was created to promote readership all around the city. The books are free, but their motto, which is written in the back of every book is: "this is a 'libro al viento,' it is for you to read and for others to read as well. For this reason, you should return it when you are done and take another one."

Since 2004, 54 issues of classic literature have been published which sum up to 4 million books. The books have also been distributed to public schools, hospitals and several public spaces. They are now more difficult to find because many readers have never returned them. However, the program is successful because it has brought free books to public schools.

More recently, the city of Bogota began with a system of "biblioestaciones" (library stations) on the Transmilenio transit system. These now control the use of the "libro al viento"as well as many other titles.

Like the BiblioBurro, these are low-key library systems that are helping spread knowledge and culture all around.