Sarah McDaniel Dyer touched a lighter's flame to a piece of paper, a referral to a specialist who could treat the rare genetic disorder that afflicts her nervous system.

The specialist didn't accept her insurance, and she couldn't afford the fee. This is one reason McDaniel Dyer, 27, came with a dozen or so others to cremate credit card bills, mortgage statements and other debt notices during the inaugural event of Strike Debt, a new Occupy Wall Street spinoff. Occupy affiliates have organized around student debt since last winter, but Strike Debt is the first to target debt writ large – from households to municipalities.

"I can be kind of healthy and broke, or I can be financially secure and really sick," McDaniel Dyer told the crowd at Brooklyn's East River State Park. "It's hard because I don't really see a sustainable future in this, and this is my life." 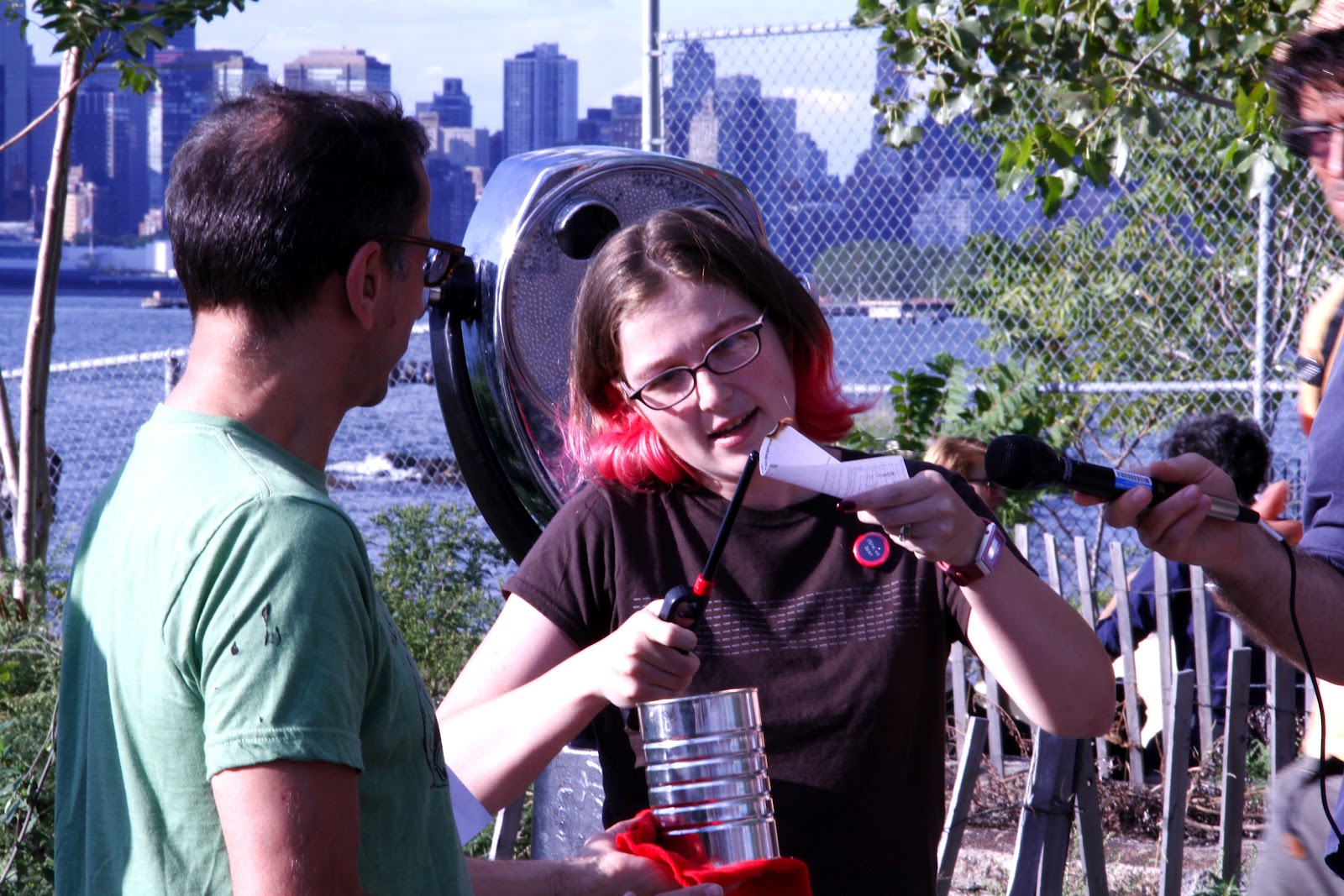 Like most who attended, McDaniel Dyer is an Occupy veteran who has helped get Strike Debt off the ground since May. When she was 24, she fell inexplicably ill and starting seeing doctors up to three times a week. It took more than a year to diagnose her with acute intermittent porphyria.

McDaniel Dyer had medical insurance but racked up $7,000 in credit card debt for co-pays and other medical bills. She also owed $256 each month for student loans. McDaniel Dyer and her husband sometimes skipped lunch to make ends meet. She tried working three jobs to pay her bills but had to cut back when her health declined.

Strike Debt activists say McDaniel Dyer is not an outlier.

McKee, an art critic, doesn't answer his phone for fear a creditor is calling. He built up credit card debt years ago when he was broke. He also has student loans. "I live in perpetual anxiety about it," he said.

McKee says Strike Debt's goal is to turn individual debtors into a debt resistance movement. “How do you make debt into a political issue, bring debtors out of their isolation, shame, silence?" he asked. "How do they become a collective political identity?" 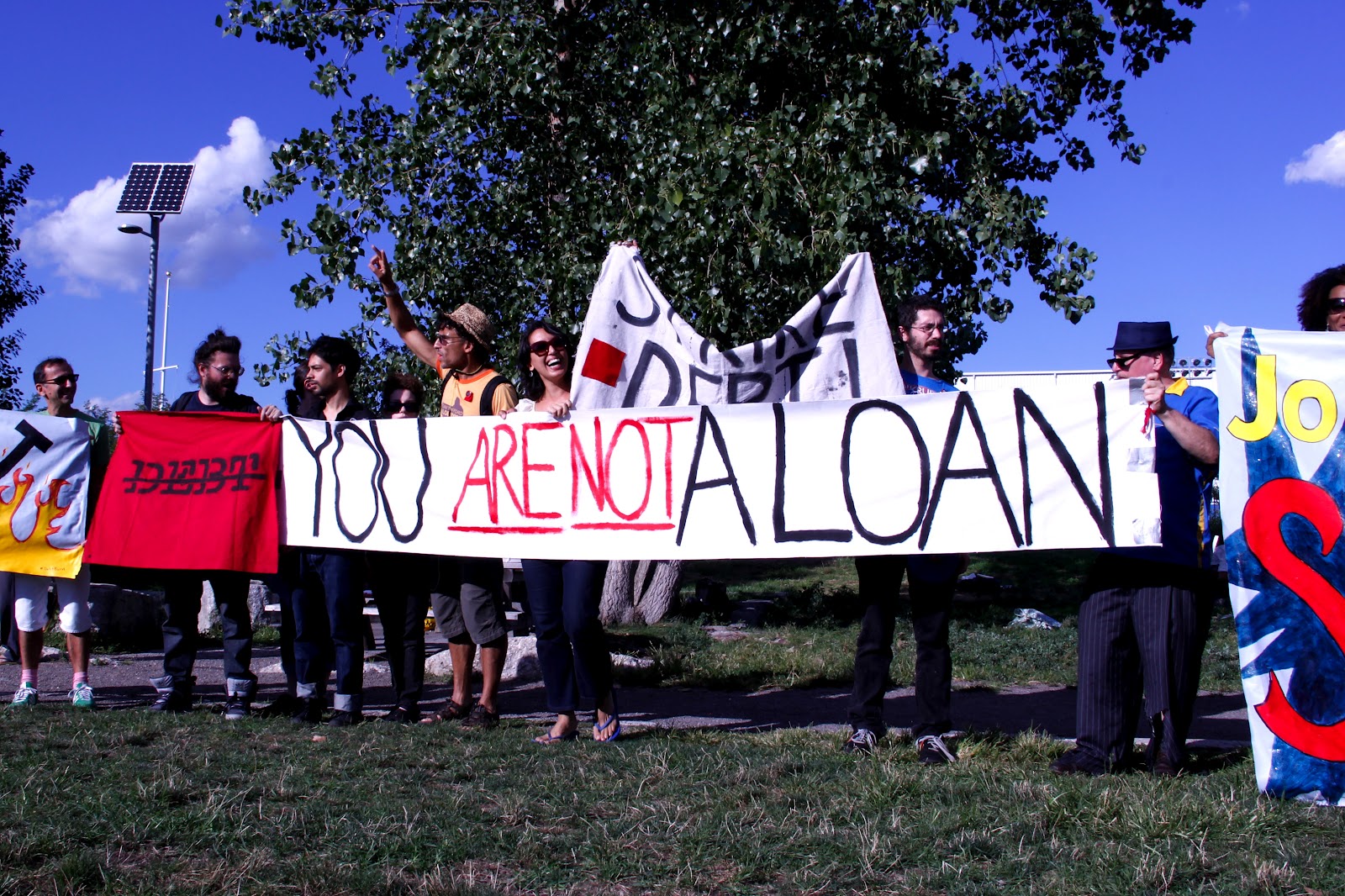 The debt burn was a first step in spreading the word. Standing in a corner of the Williamsburg park, against the backdrop of the East River and Manhattan's skyscrapers, speakers shared stories of out-of-pocket medical costs, devalued homes and skyrocketing student loans. Alluding to draft card burnings of the 1960s, they singed debt effigies and dropped the charred remains into a silver coffee can. Onlookers cheered and media cameras clicked, as a trumpet whined an elegy. Most wore red felt squares as pins, a nod to student protests in Montréal last spring. Organizers held a banner proclaiming, "You are not a loan." Besides a spurt of chanting ("Hell no, we won't pay"), the event felt more like group therapy than radical activism.

Nicholas Mirzoeff, a middle-aged New York University professor who has been part of Strike Debt since May, said the group made him more comfortable discussing his own debt. Mirzoeff, who teaches media culture, has been involved in Occupy since last fall. He burned his mortgage statement at the event.

"Debt makes you feel ashamed. It makes you feel like it's your personal fault," he said. "When we add up the numbers of people in debt in this country, it actually comes out to everybody."

Mirzoeff said that American society requires people to go into debt for basic social needs like housing and education.

Like Mirzoeff, most people at the event were educated and employed. Many were white. Those who spoke were mainly graduate students, university professors or nonprofit workers. 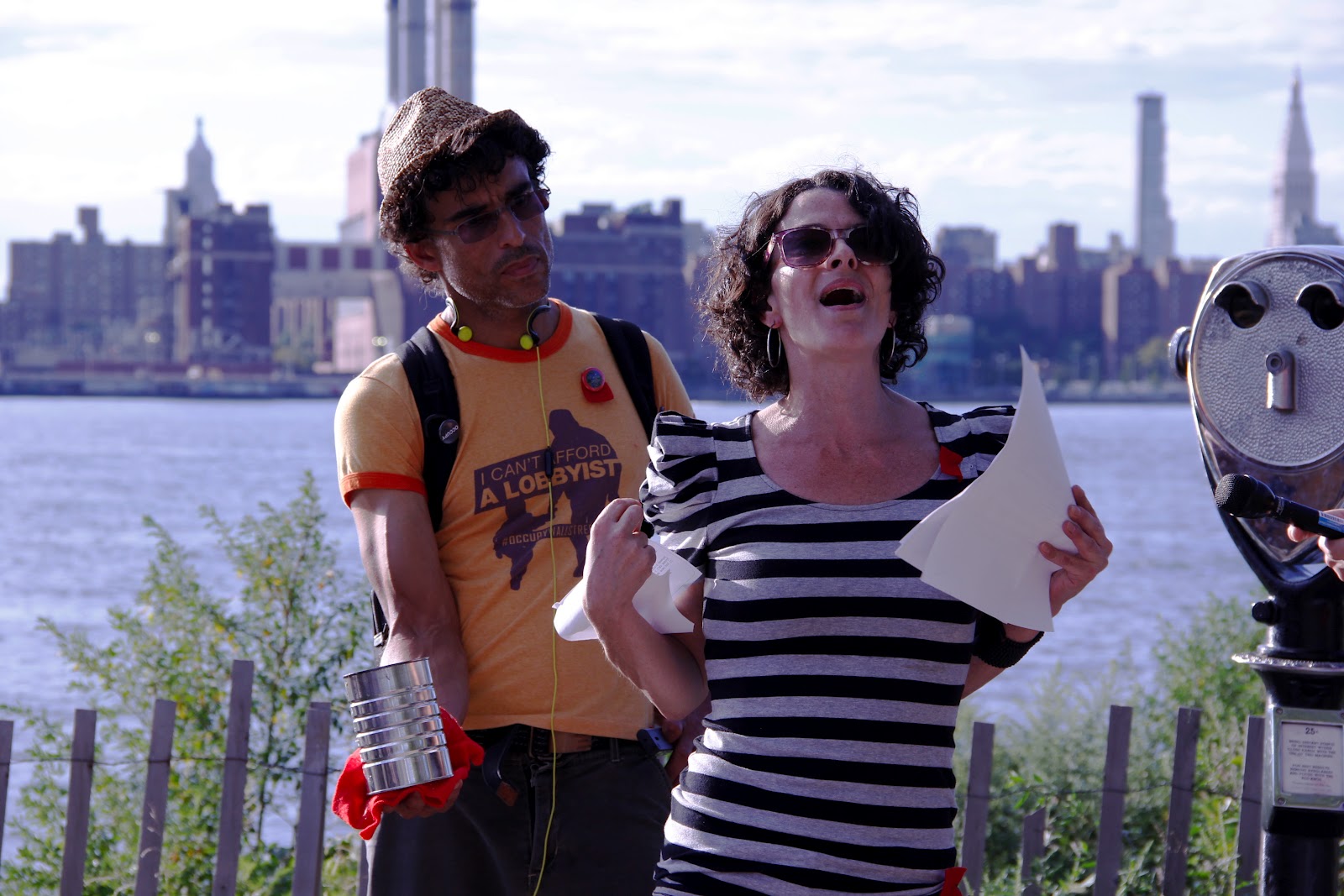 Nicole H., an adjunct professor at the City University of New York, who burned her credit card statements, shared stories of medical bills and underemployment.

"Winter," 28, a member of Strike Debt who declined to give his real name because he is considering defaulting on loans, said that the group plans a long-term organizing effort to expand the movement to medical debtors, unemployed people and those affected by city budget cuts.

Strike Debt released a manual on debt resistance on Saturday and took part in Occupy actions on Wall Street yesterday. Eventually, members say they hope to organize a "Rolling Jubilee," where debt is bought up and cancelled, and a collective debt strike.

But on Sunday, just a few passersby stopped to watch in East River State Park, where sunbathers and picnickers dotted the grass. Some were sympathetic, others ambivalent.

Karen Wile was at the park for her grandson's birthday party. "It is important to realize that some people really were victims, but not everybody," she said. "I don't think it's one-size-fits-all."

"You can count me as skeptical that this will mushroom," he said. "But I've been wrong before."

Gitlin, who teaches journalism and sociology and was active in protest movements in the 1960s, said Strike Debt is a partial answer to "What do you people want?" — a question Occupy has faced since the beginning. So far, he said, the core of the movement focused more on establishing a presence than specific reforms.

"There's considerable desire for a program that can be put on a bumper sticker — something that can be compressed into a concrete goal," Gitlin said."'Resist debt' – I mean there it is." 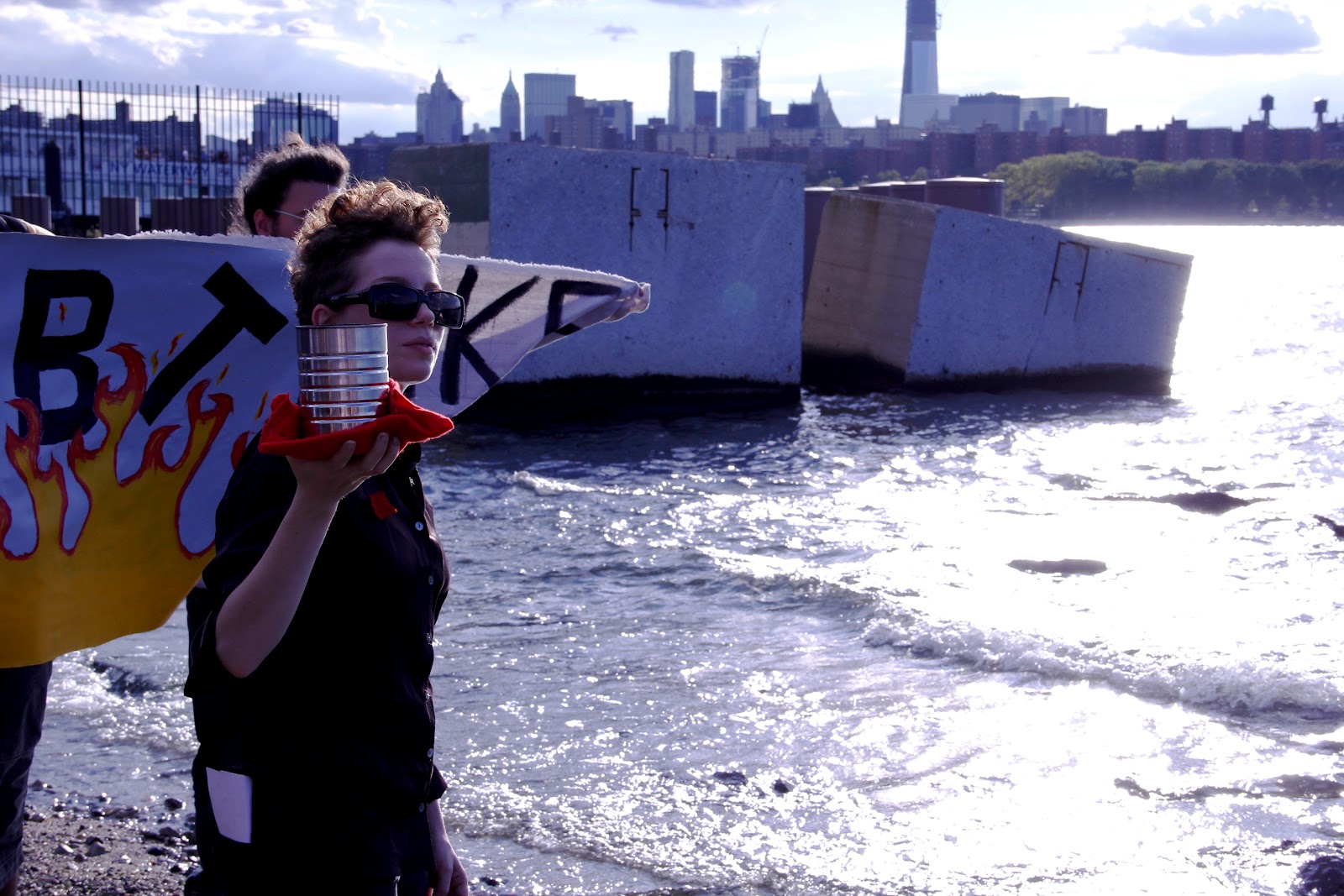 Sarah Quinter, 26, one of the "Life After Debt" organizers prepares to dump the ashes of debt notices into the East River.

If Strike Debt wants concrete reforms, it will have to work in coalitions with other groups, he said.

Students should think twice before defaulting on loans, according to Megan McClean, who manages policy and federal relations at a national association of college financial aid officers. She pointed out that default can lead to penalties, bad credit and garnished social security benefits, and it disqualifies students from future federal aid.

"It really can be kind of a messy situation," she said.

Broader debt resistance can have negative repercussions across the economy. Craig Silvers, a Chartered Financial Analyst in Los Angeles, said that if people stopped paying bills en masse, they would hurt lower and middle classes by driving up prices and interest rates. This would also trigger massive job cuts. "It's not a trickle down, it's a gusher," he said.

Many Strike Debt members view the debt burn as symbolic, even as they aim to build a movement around debt resistance.

"I'll pay off my debt until there's a moment when there's a coordinated national debt refusal movement," Mirzoeff, the NYU professor, said. "I wouldn't advise anyone not to pay their debt as an individual right now, because the law will come after you." 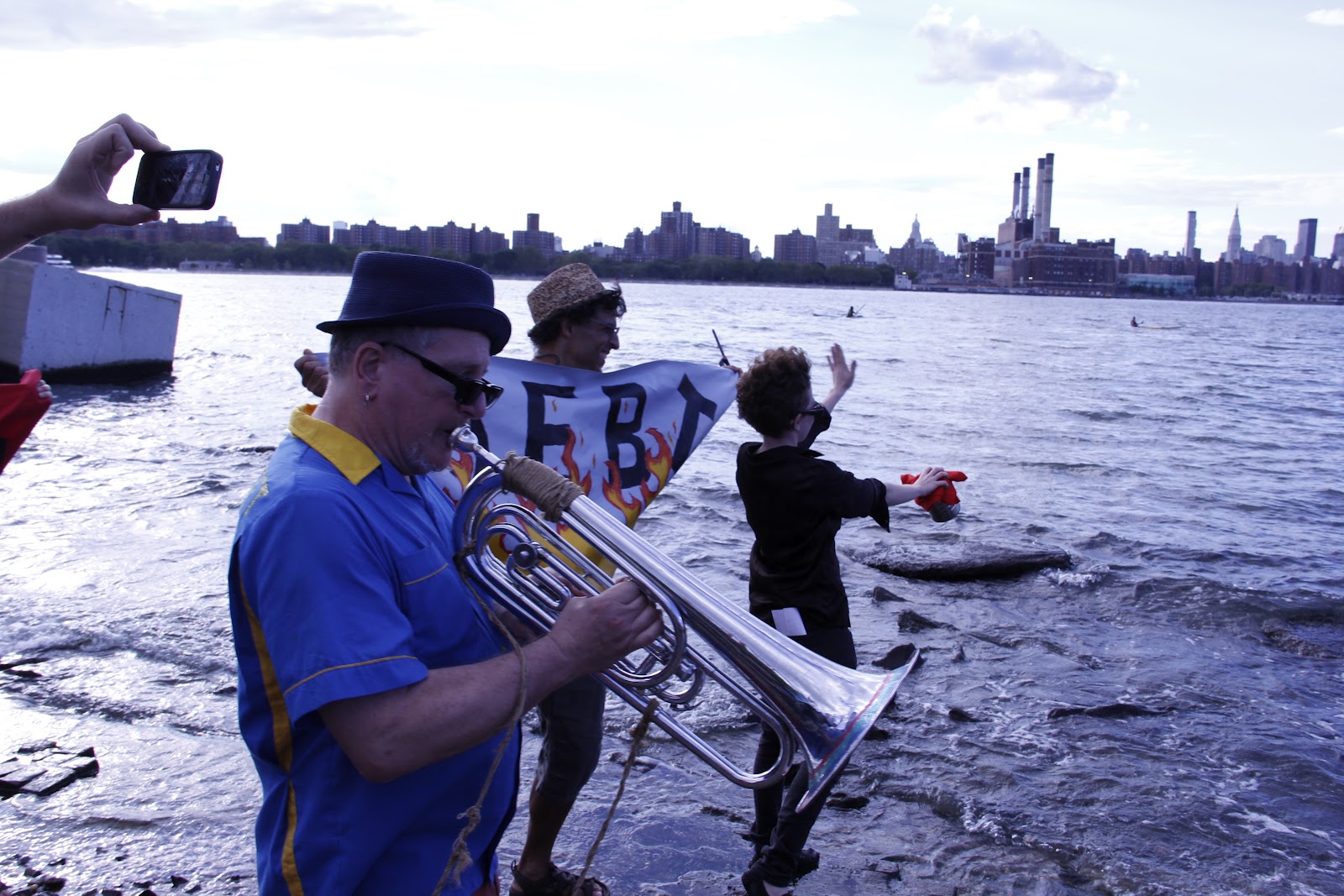