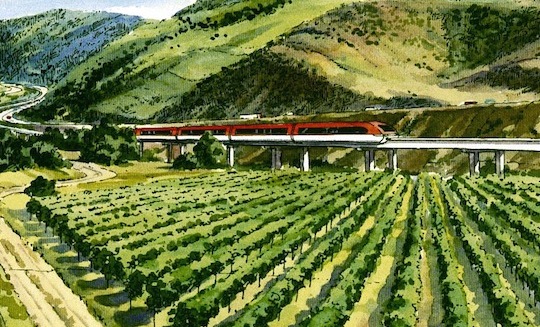 California's High-Speed Rail is one of the nation's most important and controversial urban projects in recent memory. Some hail it as a critical step toward reducing greenhouse gas emissions in a state of 40 million people, a stabilizing force for California's Central Valley and a critical link among cities in the region. Detractors call it a real estate development scheme, a boondoggle, an inducement to sprawl or simply a bad idea that diverts money from more worthy transit projects.

As I have made clear in earlier posts, I believe in this project. I feel the current debate ignores many opportunities to push planning and urban development ideas forward. Join me for a vibrant discussion with two California planners who know a thing or two about the project: Egon Terplan, planning director at the San Francisco Planning and Urban Research Association, and Ian Carlton, vice president of Transit Communities. We discuss what the high-speed rail project really means for planning, cities, equity, sprawl and our ability to cope with uncertainty.


Correction: In the discussion I (Alex) mistakenly state that France's TGV has been in operation for 40 years, but it has actually been operating for 30 years.

Polis brings you this podcast in collaboration with CoLab Radio.

Credits: Rendering from The Sacramento Bee.