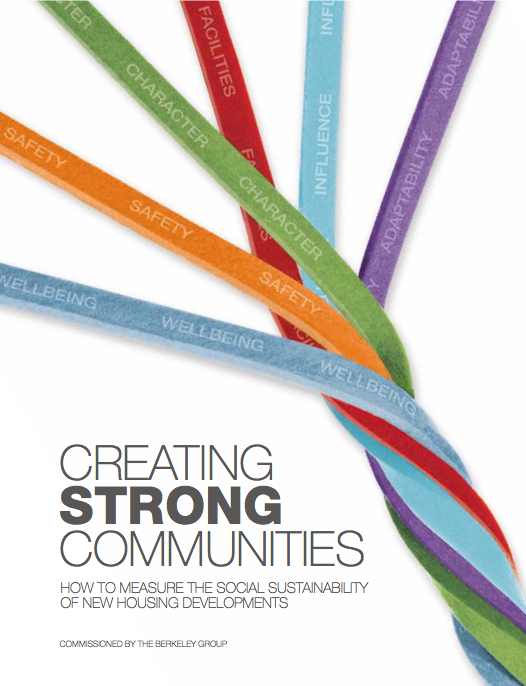 Building on previous research exploring design for social sustainability, the British developer Berkeley Group recently commissioned research to measure the social sustainability of new housing and mixed-use developments. Released last week, the resulting report was carried out by Social Life, a social enterprise created by the Young Foundation this year, and Tim Dixon, a professor at the University of Reading. It seeks to challenge the stereotype that new housing developments are less sociable and attractive places to live than older communities. In the bigger picture, the Berkeley Group also hopes the report will bring the social dimension of sustainability onto the British government’s agenda as it considers embarking on one of the biggest housebuilding programs in a generation to address housing shortages.

The report outlines a framework for defining and measuring social sustainability: 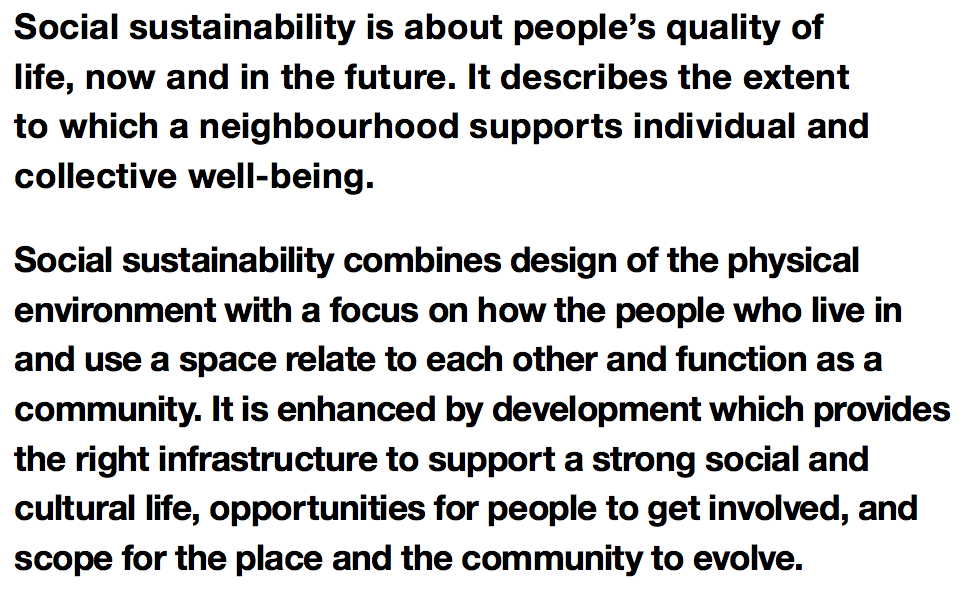 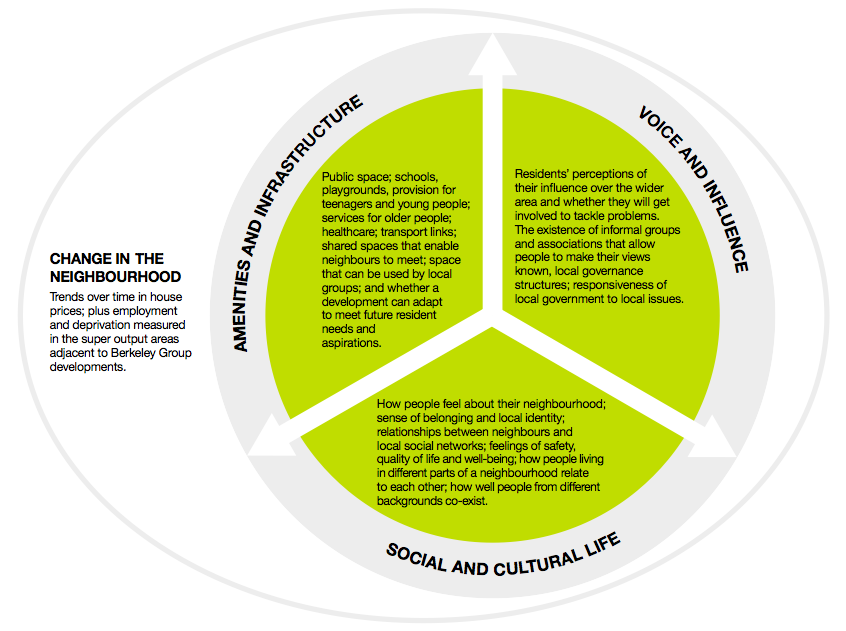 The framework consists of four dimensions: infrastructure and social amenities, voice and influence, social and cultural life and change in the neighborhood. The report assesses the first three dimensions through site surveys and nearly 600 face-to-face surveys at four Berkeley Group developments: two urban, one semi-urban and one rural. The neighborhood change dimension will be studied when 2011 Census data becomes available. 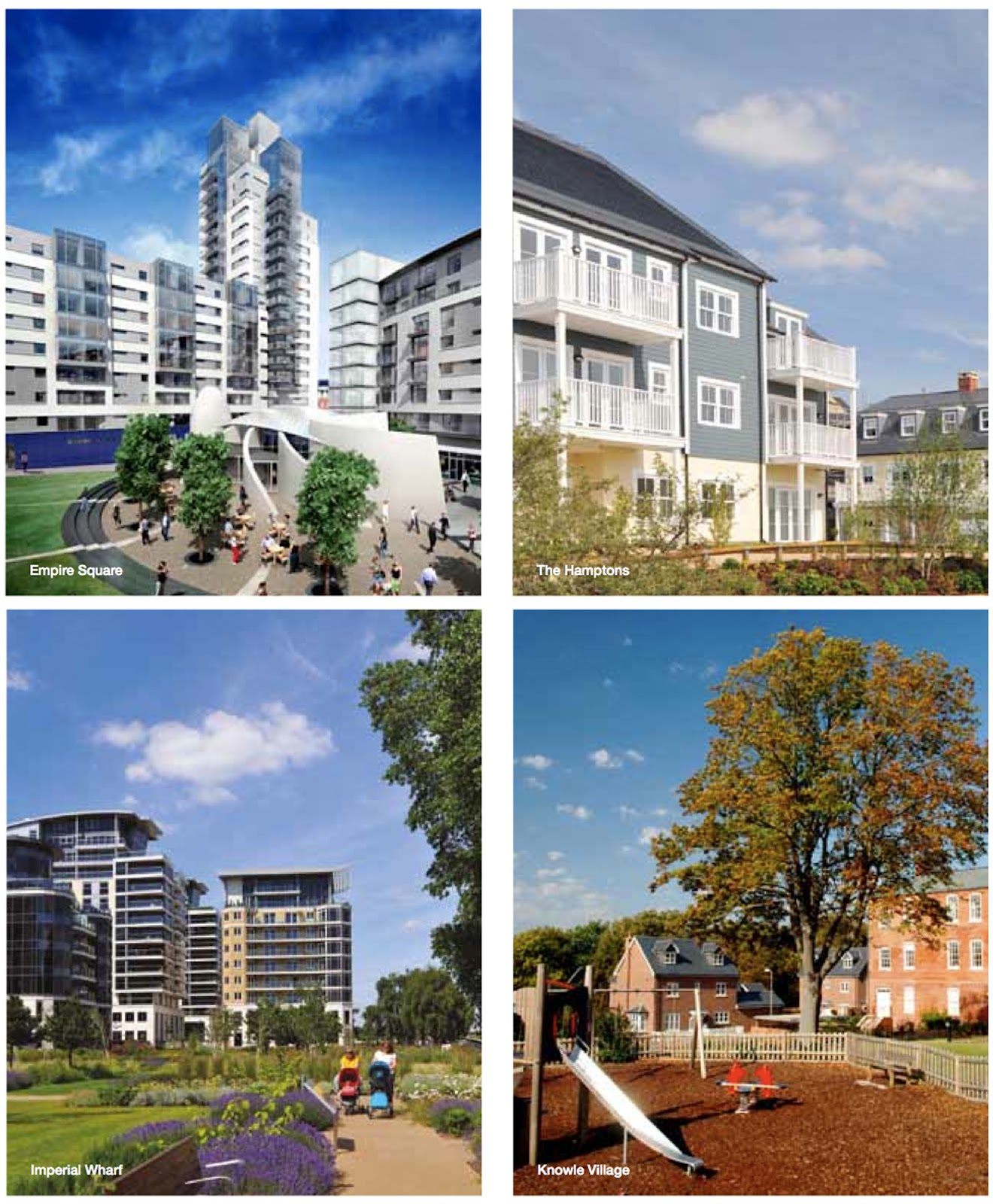 While the report presents an impressive amount of valuable data, I was disappointed by the lack of critical analysis of the findings. The report focused on comparing the performance of the Berkeley Group's developments to benchmarks for comparable places and to national studies, highlighting the strong performance of the developers' projects in terms of "social sustainability."

Yet the report's definition of social sustainability focused on quality of life, well-being, spatial design and residents’ relations. It did not include explicit explorations of equity and justice, which are fundamental components of social sustainability. Such a critique is certainly not new: Julian Agyeman, co-editor of Just Sustainabilities, had a similar response to the Design for Social Sustainability post on Polis earlier this year. It is not surprising that the research took such a depoliticized stance on the fuzzy term "sustainability," considering that a developer commissioned the framework and that this is the dominant approach the world over. 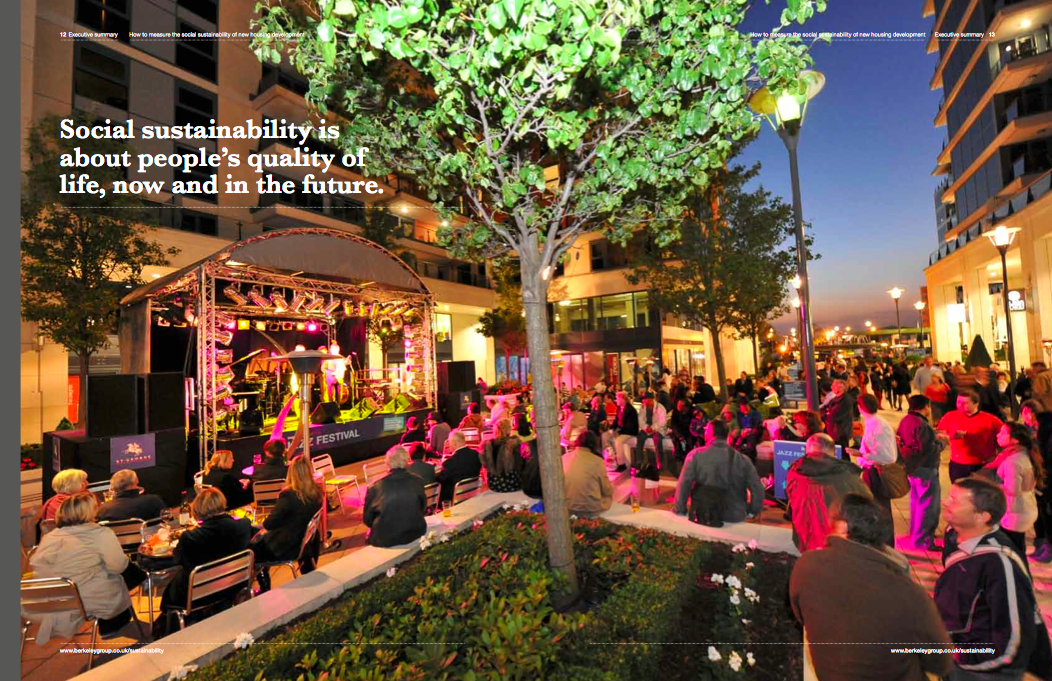 Taking equity and justice to the heart of social sustainability brings some uncomfortable, and fundamentally important, discussions to the table. Using the data gathered, an important step would be to analyze the survey results in relation to tenure (each site contains one-third affordable housing), diversity of residents, the location of affordable housing within the site and the location of the development in its surrounding environment. This would begin to tell us something about the relationships between equity, justice and space alongside quality of life, well-being, design and the relationship between residents. On three of the four sites, residents in affordable housing were less likely to strongly agree that they felt they belonged in the neighborhood than private owners and renters. This highlights the importance of asking some deeper questions.

The report highlights a key challenge in the contested notion of sustainability. Discussing, let alone solving, structural issues is no easy task. But it is misleading to overlook the political component of social sustainability — fundamental social and economic injustices. Exploring such issues does mean challenging discussions as we examine our own positions in relation to power. But if the Berkeley Group wants to be true to their statement that England's 2011 urban riots influenced their decision to research social sustainability, then there is no doubt that such ideas need consideration.