Democratic Space: From the Globe to Your Local Library

Today is the International Day of Democracy. At least on paper. The United Nations declared September 15 to be Global Democracy Day two years ago. Like most ambitious dedications that line the white squares of the calendar, its most fruitful function is probably to serve as a cause for reflection.

In the U.S., regulations do hold sway and stakeholders have their say, but capital is king and class and race have historically limited choice of and ability to influence one's environment. In much of the world, unwritten rules, informal networks and under-the-table transactions play a big role in the governance and development of city space, reflecting their pervasiveness in all other spheres of government. In post-colonial cities, landholding patterns and control mechanisms bear vestiges of a heavy-handed past — just as they weigh down administrative and governance structures. Where there is no democracy to speak of, the environment is also the site for and manifestation of imposed practices and ideologies. The democratic space and the city space reflect each other.

Paraphrasing President Obama's recent description of the goals of civil society, Ingrid Srinath — Secretary General of CIVICUS — defines democracy as "the freedom of people to live as they choose, to speak their minds, to organise peacefully and to have a say in how they are governed; a free press to report the truth; confidence in the rule of law and the equal administration of justice; a government that's accountable and transparent."

A small local conflict over city space can be an opportunity to gauge the level of spatial democratization. In the Bernal Heights neighborhood in San Francisco, the local library is undergoing renovation, and its aging mural has become a site of contestation. Commissioned by the city and completed by artist Arch Williams with neighborhood youth and volunteer artists in 1982, the mural depicts historical figures, Hispanic and black children and other scenes on three of the library's facades.

The Library Commission had been discussing the fate of the mural with local residents since 2002, with options including preserving all or part of the mural, replacing it with a new mural, or replicating the existing mural indoors. In the end, there was no clear consensus, and the Commission recommended that the San Francisco Arts Commission — which must approve alteration or removal of art on city property — restore only the better-preserved mural on the front of the building and paint over the rest. 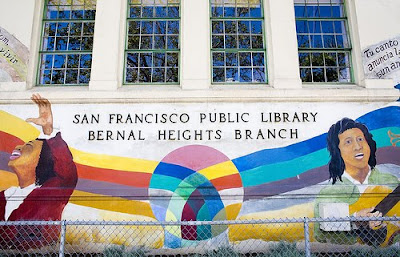 This has upset residents on both ends of the spectrum. Some community organizers and residents feel that the entire mural should be retained for its cultural and historical value — including its symbolic value in a gentrifying neighborhood — and that library authorities are responsible for the lack of maintenance that led to its decay. Other residents, including one representing Bernal Heights in the Council for Neighborhood Libraries, feel that the mural is not "art-worthy," takes away from the historic building, and is beyond repair. The SF Arts Commission will examine the issue this Wednesday (the meeting is public, by the way) and issue its final vote next month. 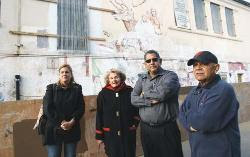 If this is a test case for democracy, it gets an A. Voters approved the bonds to renovate the library — a public resource. Local stakeholders are comfortable raising concerns and participating in discourse about the fate of the space. Citizens are well organized into associations and community groups. City Commissions with diverse members and expertise in the issues and governed by rules of accountability seek out different opinions and make decisions through transparent proceedings.

Conflict can seem negative, but it is inevitable — especially when it comes to something as scarce, visible and shared as public space. The way that concerns are voiced, decisions are made and conflicts are resolved, however, can (sometimes) be truly democratic.

Credits: Rendering of the new library from SF Public Library website. Photo of mural from Flickr user Thomas Hawk. Photo of residents from the SF Examiner.