Found on Sustainable Cities Collective: a post about the San Francisco Planning and Urban Research Association (SPUR)'s map and illustrated guide to privately owned public open spaces (or POPOS) in the city. 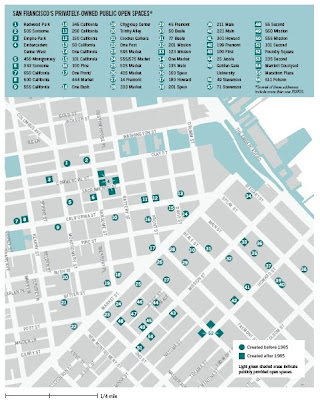 I had never thought about these in depth with regard to San Francisco, vaguely assuming they were the result of benevolence or public relations efforts. However, it makes sense that these spaces usually emerge out of incentives given to the developer. SPUR presents them as a "rich network" of the city's "kept secrets."

If this is so, it would be interesting to see what incentives and requirements lead to good spaces. In places like Mumbai, privately developed public spaces often become live billboards whose use is either cut off or strictly patrolled.