Last weekend was the four year anniversary of Hurricane Katrina’s landfall on the Gulf Coast of the U.S. There is more to be frustrated by than inspired by, as rebuilding has been painfully slow and new aspects of the tragedy continue to surface. However, New Orleans has emerged as the epicenter of green affordable housing designs and experiments in the U.S., attracting efforts and attention from a wide audience, from world-famous architects to local students.

In some ways, New Orleans has weathered the recession more successfully than most American cities. As reported by the Brookings Institution, unemployment in New Orleans has stayed constant over the past year at 5 percent, and though has recently spiked to 7.3 percent, is still significantly below the national average of 9.5 percent. The city has lost 1 percent of its jobs, in comparison with 4.1 percent of jobs lost nationally. The Brookings Institution also reports that the city has absorbed 10,000 new households over the last year, the biggest one-time expansion since 2007.

The New Orleans housing market, like many American cities, was hit by the subprime crisis. Unlike most American cities, however, it benefits from its place at the center of massive rebuilding efforts. The Brookings Institution reports that 39 percent fewer people bought homes this year than last year, and 48 percent fewer homes were built. There are more than 62,000 blighted and vacant homes, and rent levels are 40 percent higher than they were before the storm. Last year, the “Big Four” public housing developments — B.W. Cooper, C.J. Peete, Lafitte and St. Bernard — were demolished, and redevelopment plans at two of the four sites have been plagued by delays, resulting in a huge reduction of affordable housing units. New Orleans homeowners face additional challenges and complications, partly because of higher homeowner’s insurance rates and storm damaged homes.

The Obama administration, as promised, has focused their attention on the city and pursued beneficial policies that have showed a sharp improvement from the response of Bush’s response. While President Obama has not visited New Orleans since taking office (and on the anniversary was vacationing in Martha’s Vineyard), HUD Secretary, Shaun Donovan, Homeland Security Secretary, Janet Napolitano, and FEMA head, Craig Fugate, have all visited. HUD has directed money to the redevelopment of public housing in New Orleans, the administration has formed a widely-heralded interagency working group, and Fugate has successfully eliminated much of the red tape that plagued FEMA’s inadequate response over the last four years, and has distributed $1.2 billion over the last eight months. However, there are many setbacks and failures of the administration’s response, including the debate between FEMA and the state of Louisiana over the financing of Charity Hospital, and the delay of many of the projects that are part of the $15 billion regional hurricane protection system (which were given a deadline of 2011). While the administration has improved the situation, they have clearly not lived up to Obama’s strong-worded promise made the last time he was in New Orleans, in February 2008: “I promise you that when I’m in the White House I will commit myself every day to keeping up Washington’s end of the bargain. This will be a priority of my presidency. And I will make it clear to members of my administration that their responsibilities don’t end in places like the 9th Ward, they begin in places like the 9th Ward.” New Orleans, four years later, is still struggling to rebuild and recover from Hurricane Katrina.

Over the last four years, New Orleans has become a laboratory for innovative and energy efficient affordable housing designs, with projects by internationally renowned architects, such as Frank Gehry, financed by mega celebrities, such as Brad Pitt, and national contests entered by creative students at Tulane. Many architects view New Orleans as a fishbowl in which to demonstrate the impact and potential of original and exciting housing designs. In many ways, we owe much of our future green affordable housing successes to the designs developed in response to the Gulf Coast’s tragedy and slow recovery after Hurricane Katrina.

The Tulane School of Architecture established a design and build program, URBANbuild, in which “teams of students take on the design and construction of prototypical homes for New Orleans’ neighborhoods,” as described on the URBANbuild website. The program partners with Neighborhood Housing Services of New Orleans (NHS of New Orleans), one of the most impactful and influential housing organizations in the city, as well as with local businesses, organizations and residents. The program gained popularity and publicity from the Sundance Channel’s six series documentary, “Architecture School,” on the prototypes and housing designs of the students. The designs are focused on sustainability, inspired by the traditional New Orleans architectural vernacular, and conform to tight size and budgetary limitations imposed by NHS. Each home has three bedrooms and two bathrooms in a 1,200-foot lot. 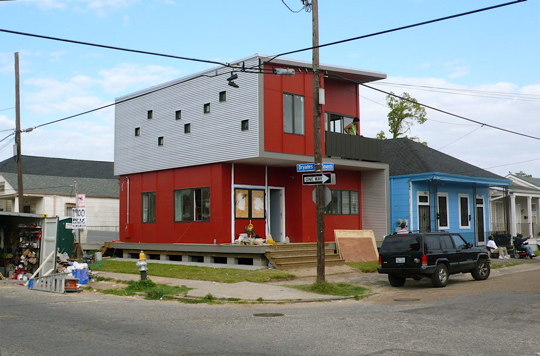 This URBANbuild home was constructed with Structural Insulated Panels (SIP), which provide high levels of insulation. SIP is also quick to build and very strong. Source: Life Without Buildings 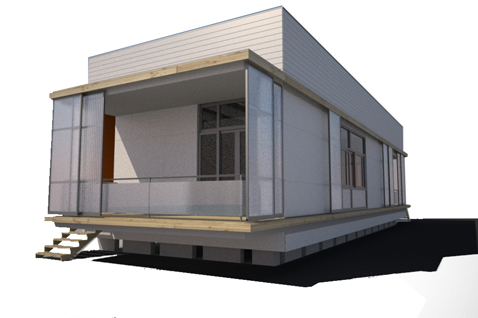 In addition to the prototypes designed by the Tulane architecture students, New Orleans has rejuvenated the concept of prefabricated housing, and was part of the inspiration for MoMA’s 2008 Home Delivery exhibit on the history of prefabricated housing design. One of the designs featured in the exhibit was “Instant House,” designed by digital fabrication and three dimensional modeling by MIT associate professor Larry Sass. Instead of screws and nails, the design uses notches and grooves, which greatly compresses the building time and cost: Five students with rubber mallets built a home in two days and the home is estimated at $40,000 per unit, if built on a large scale. The show exhibited a 196-square-foot, one-room shotgun home, designed with elements of New Orleans vernacular architecture. 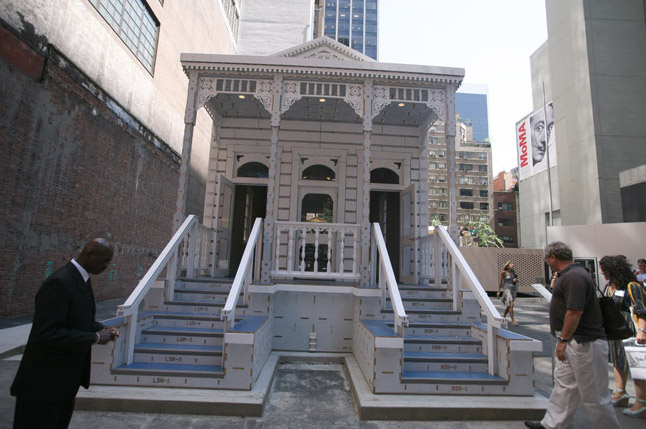 Another design that stands out among the designs and prototypes of affordable housing in New Orleans is one based on a diverse and exemplary partnership. “Modgun” was designed by local urban planner, Robert Tanner, revised by world-renowned architect, Frank Gehry, and supported by an African-American community bank and a state-chartered redevelopment agency. The plan is described as a “modular version of the traditional New Orleans shotgun,” with many of the same qualities seen in other New Orleans housing designs: affordability, sustainability and the ability to fit in among the vernacular context.

There are many other players in the New Orleans affordable housing market — from Brad Pitt’s Make It Right project in the Lower Ninth Ward to Global Green’s projects and policy initiatives. Some of the designs take advantage of New Orleans’ vulnerability, imposing inappropriate or unsustainable styles on the local residents. The rebuilding of New Orleans, still embarrassingly incomplete after four years, has a long way to go, and needs additional resources and attention by the administration and many others, but the exciting designs that have emerged from the city provide optimism for the future of the city, and for green affordable housing in the country.