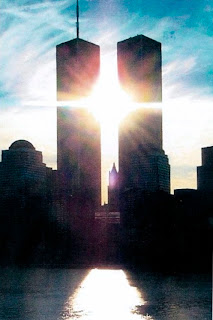 In memory of September 11th, 2001, I'd like to ask three questions. What stands out most as you look back? Did it alter the path you've taken in life? And does its meaning for you change with time?

The chilling suddenness, the heroism, the remaining scars all come to mind. The initial terror was replaced by a constant feeling of impending crisis. I began listening to the news constantly.

I think it changed my path. At the time I believed world trade would bring peace and prosperity. The Seattle protests of 1999 seemed narrow-sighted. September 11th didn't change my thinking on this, but I no longer saw financial gain as the answer.

It wasn't that I blamed the events of September 11th on global capital. Instead, they reminded me that other pursuits were more important when life could be taken so unexpectedly. There were problems to address directly. The attacks nullified assumptions that these problems would subside as more people took part in the global economy.

Still, the World Trade Center is more than a symbol of globalization. It means different things to different people and at different times. It is inspiration and excess, monotony and elegance, power, vulnerability, and cooperation. Its meanings often contradict each other. Like another legendary resident of New York City, it contains multitudes.

We often hear that September 11th changed the world. It has also changed us individually, and we change it. Somewhere in our minds, the World Trade Center is still a marriage site and workplace. It is where our parents took us on first visits to New York, windswept lookouts on the city from above, dizzying pillars to the sky from below.