Today, every sixth city in the world can be defined as a shrinking city. In the United States, these were once the dominant cities of the country, the top producers in industry and manufacturing with growing populations and in-migration, such as Flint, Michigan, Youngstown, Ohio or Richmond, Virginia. However, as the heyday of steel and other industries ended in the 1960s and factories closed throughout the 1970s, these industrial cities were left financially helpless. Practically overnight, the economic infrastructure of entire cities disappeared – thousands of jobs and careers, civic leaders, community-building institutions. In the USA, more than half of the 100 most populous cities in 1950 have fewer residents today, though the national population has doubled in that time. Shrinking cities, barely economically sufficient in the best of times, are hit extremely hard by the recession.

What is a “shrinking city”?

Berkeley’s Symposium on Shrinking Cities broadly defines the category to include cities, parts of cities or metropolitan areas that are experiencing a dramatic decline in their economic and social bases. There are numerous negative influences on these cities, including globalization, the post-industrial shift from manufacturing to service industries and the “second generation” of the high-tech sector after the bursting of the dot-com bubble. Lorlene Hoyt, a professor of urban planning at the Massachusetts Institute of Technology, specifically describes cities in this category with three criteria: First, the cities must be old with an industrial history, which she defines as having more than 5,000 inhabitants by 1880. The cities must be small, with populations between 15,000 and 150,000. Lastly, the cities are all poor, with median household incomes of less than $35,000.

The Berlin-based “Shrinking Cities” project reports that during the 1990s more than a quarter of the world’s large cities saw population declines, mainly in post-socialist Europe and America, but also in Japan, Russia and China, as the population shifts to major, thriving cities, from many of the smaller cities. The concept of shrinking cities is more common and established in Europe, which has considered the phenomenon for longer.

I became interested in the idea of a shrinking city after living in Youngstown, Ohio last fall while working on Obama’s campaign. Youngstown, a city in northeastern Ohio, is an extreme example of a shrinking city, with a population today that is half the size it was in 1950. In the 1950s and 1960s, Youngstown thrived with 168,000 people, depending heavily on the steel industry. However, in the last thirty years since the steel mills have closed, Youngstown is known for a strong mob influence, political corruption and as a way-station between the larger near-by cities of New York, Pittsburgh, Cleveland and Chicago. In 2002, born out of a partnership between the city of Youngstown and Youngstown State University, Youngstown 2010 was developed. This plan, created with the contribution of thousands of city residents, is an economic and urban development plan that acknowledges Youngstown’s “new reality”, as the plan explains, as a smaller city with a population of approximately 80,000. Youngstown 2010 is viewed as one of the preeminent national approaches to addressing and planning for shrinking cities.

While shrinking cities face many obvious challenges, they also have inherent assets. Many of the cities’ amenities originated in their historic dominance. Often the cities, like Youngstown, were initially well-planned, with extensive infrastructure and public services. The cities often have regional or national transportation access, located on railroads or rivers, because of the initial needs of the industrial economies. There is stunning architecture and cultural institutions, such as museums, universities and symphonies, developed and well-funded during the cities’ prosperous decades. The cities are more affordable to live in than their larger neighbors. Jay Williams, the Mayor of Youngstown, describes the seemingly paradoxical presence of these amenities in the face of the major challenges Youngstown faces: “Where else do you see dilapidated buildings across the street from the home of the symphony? Where do you have wonderful museums and an exceedingly high crime rate? There is a growing university and a struggling K-12 school system.”

Youngstown began its planning process with the goal of creating a smaller, well-planned and sustainable city. One of the most important steps in pursuing and developing an economic development plan is understanding and embracing their current city. The first two goals of Youngstown 2010 are: “accepting Youngstown is a smaller city” with an oversized infrastructure and many abandoned properties and “defining Youngstown’s role in the new regional economy” which necessitates moving away from the past steel-dominated economy.

Establishing viable neighborhoods in Youngstown, a key theme of Youngstown 2010, has two sides – developing and sustaining more vital neighborhoods and reclaiming the neighborhoods that are irreplaceable. As explained in Youngstown 2010, the population has declined at a much faster rate than the reduction in housing units. This has resulted in abandonment and looting, and the vacant homes become places for criminal activity, decreasing the safety and property values of the surrounding neighborhood. Mayor Williams sharply increased the budget for demolition during his time in office, and the city is planning to stop investing in resources to develop certain areas. This allows the city to decrease the size of the infrastructure to one that is more appropriate for the current population size and demolish abandoned homes to ultimately create additional green spaces. 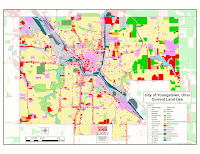 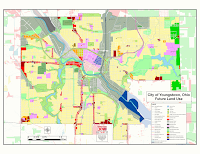 These plans, while envisioning a better and more sustainable Youngstown, are controversial in their implementation. The sacrifices and hard decisions that must be made place the burden predominantly on the poor and minority residents. The neighborhoods are segregated, mainly by socioeconomic status, which has developed into extreme racial segregation. Youngstown 2010 and Mayor Williams’ strategies allow certain neighborhoods to empty by not rescuing or restoring abandoned houses and cutting off public services to unsustainable areas. John Russo, a professor of labor and working-class studies at Youngstown State University, asked: “You always have to ask yourself: ‘What areas are going to be abandoned?’ And most of those are the African-American parts of the city.” 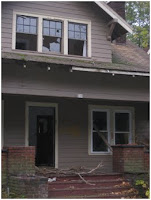 The plan attempts to limit the blight and abandonment that has seemingly taken over Youngstown to only certain neighborhoods, in order to save the other parts of Youngstown. In the longer term this may make sense, but it shows a lack of understanding of the current pain of living through these proposals. While the city has not forced anyone to move, it also leaves many of its citizens to live in neighborhoods that are rotting from the inside out. It deserts those that have the least resources to cope. Foreclosure rates have skyrocketed as entire neighborhoods of homes have declined in property value, and have left families with nothing. While the proponents of the plan argue that in the long-term it is pointless and perhaps impossible to revive certain neighborhoods, the implementation abandons many of the residents who still live in these neighborhoods.