You wouldn’t find Bucca on maps of Iraq six years ago, but by 2007 it had a population of 22,000. This vast U.S. army base is one of many “cities in the sand” that Americans have built from scratch to house and cater to troops, according to the New York Times. 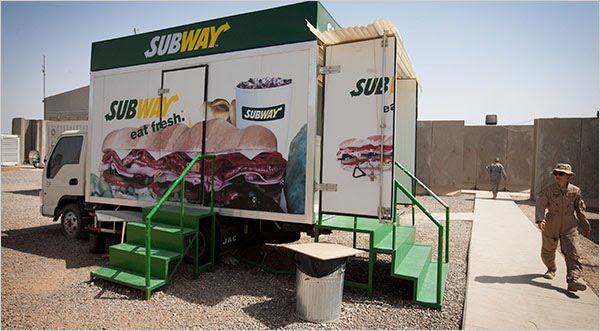 With populations comparable to those of Ithaca, NY, or El Cerrito, CA, and amenities like sewage systems, power plants, fire stations, hospitals and even Subway outlets, the bases are truly artificial cities. They stand worlds apart from the Iraq outside their gates, boasting clean streets, sanitation, working electricity, potable water, relative safety – and an occasional visit from NFL cheerleaders. Thousands of workers from Uganda, Bangladesh, the Philippines and India live in isolated portions of these forts, interacting minimally with Westerners; the real Iraq is completely excluded.

There is a parallel between these gated islands and the all-inclusive high-rise complexes springing up on the periphery of Indian cities, where those who can afford it create a self-contained world of manicured lawns, non-stop water and electricity, fitness centers, and shops. One such walled city – Hamilton Court outside of Bangalore – even has a private school on the premises. Security guards keep out the rest of the population, except for servants who wash floors and cook meals during the day and return to the slums that cluster around the complex at night. These, of course, lack the most basic facilities and public services. 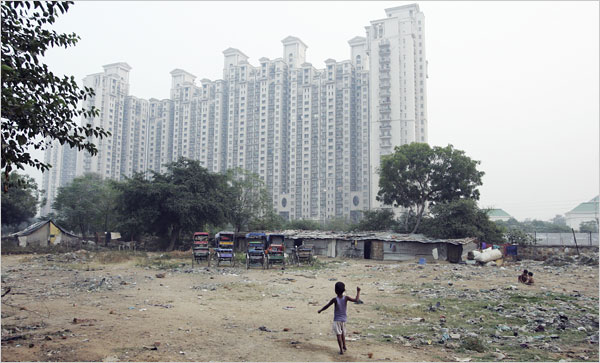 Although these spatial dichotomies may be tied to the effects of neoliberal capitalism – and resulting conflicts and growing inequality – they seem to be a regression to colonial or even feudal spatial configurations, with fortified bastions of wealth served by a native population living in poverty outside the gates.

Literally inhabiting two separate cities is probably the pinnacle of spatial inequality. This stems from inequalities of class, income, education, nationality, etc., but I think that once established, it has consequences that supersede the initial bundle of inequalities. In the case of India, privatized communities monopolizing the resources of wealthy citizens makes it much more difficult for public services and investment to grow. It also seems that such spatial segregation cements differences, creating two enclaves that can only continue to diverge and whose boundaries become nearly impossible to breach.

Credits: Photos of Iraq and Mumbai from the New York Times.