Can Quality Housing Be Affordable?

Last week I posted some observations on the redevelopment of the waterfront in the Williamsburg section of Brooklyn. It was an overview of different planning issues that are being addressed through the revitalization process. This week I will focus a little more on the topic of housing quality and affordability.

Williamsburg is not the only area in Brooklyn that has seen enormous redevelopment in the last decade. Close to downtown Brooklyn, the area known as DUMBO (Down Under the Manhattan Bridge Overpass) is another formerly industrial area that has experienced rezoning and the creation of a large amount of luxury residential units as well as the creation of an incredible Waterfront Park. 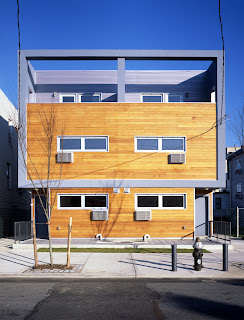 Of course when it comes to real estate location, location, location determines the premium a person should be willing to pay to live close to amenities, in DUMBO's case, such as the waterfront, its parks and proximity to Manhattan via 2 different subway lines or by crossing the iconic Brooklyn Bridge; renting and buying in this area however remains inaccessible to lower and moderate income New Yorkers and while some would argue that access to the waterfront Parks for all comes with a big price tag offset by the development of high end residential units, the slow pace at which some of the developments in DUMBO were occupied does not bode well for new developments in Williamsburg and other parts of Brooklyn. Just a couple of weeks ago, legislation was introduced to make it easier for developers in hot waters to convert their developments to moderate-income rental units.

The City of New York used inclusionary zoning bonuses, the 80/20 rule (80% market rate and 20% affordable) as a method to incentivize developers to create affordable units and developers. Yes, developers such as Dunn Development, with a successful track record of developing affordable housing through private/public partnerships have taken advantage of this to develop quality affordable housing at the Northside Piers development. However, it remains to be seen who can truly afford the other 80% if the units.

I see two problems with the term "affordable" housing. The first is that is by definition a loose term as it is based on a certain percentage of a community's Area Median Income, so the AMI in a wealthy community is bound to be higher than in a low to moderate income area. Additionally in New York City the task of creating truly affordable housing (housing affordable to people within 30-60% of the AMI) has been filled by Community Development Corporations (CDC), Habitat for Humanity and far sighted developers such as Dunn Development that have found innovative ways to use private/public partnerships and mixed income solutions to create housing that does not follow the plight of poor design, which is my second issue.

Affordable housing has become an almost taboo topic in many communities, as too often people in more affluent communities associate it with Section 8 vouchers, housing projects, and let's face it undesirables. I do not think that this is just a discrimination issue, because let's face it, people associate affordable housing with 'minorities' and poor Black people specifically in the Ghetto, something that I have heard out of the mouth of many people including public servants; I believe that this is mainly a design issue. Since quality comes with a premium, developers using, public money have created a stereotype of affordable housing: vinyl-siding, cookie cutter housing that yells out low-income housing. This is by no means to be elitist, simply I don't believe that affordable housing has to be devoid of better design and quality.

People in many communities are now preferring to use the term "workforce" housing as a label for "quality" affordable housing. The positive side of this change is that it is almost a recognition that quality needs to be put back in affordability, I find that it is insulting, because there are many hard working families living in affordable housing using Section 8 vouchers.

Luckily there are architects out there looking to flip the script on this topic and not just in New Orleans. Della Valle Bernheimer Architects developed the Glenmore Gardens project in the East New York section of Brooklyn, using the City of New York Housing Preservation and Development's (HPD) New Foundations funding program. It is a breath of fresh air in terms of design. Dunn Development, their partner L&M Equity and the architect I think are also worthy of praise for developing affordable housing on the waterfront targeting income between $21,300 and $57,000. New yorkers may think that the comparison between the waterfront and East New York is not fair, but I am addressing the design aspect and the utilization of public funds not, the location here.

So I will leave you with this thought, should it be left to architects and developers with a sound conscience to provide us with good housing or does it fall on communities to demand accountability of their elected officials to ensure that better design and true affordability be benckmarks required of new developments that use public funds?

Credits: Image from the Brooklyn Chamber of Commerce.