If the sidewalks of San Francisco feel a little more crowded these days, it's probably because there is a little less sidewalk for us to occupy. But, as it turns out, there is now a little more space for water to find its place in the ground instead of down a storm-drain as it moves across the urban hardscape. PlantSF, the organization that started the permeable sidewalk movement in S.F. continues to shepherd hydrologically forward-thinking San Franciscans through the red-tape and green-thumb difficulties of removing a piece of the city's concrete.

PlantSF didn't invent this process, they localized it. This is the critical step in turning these locally initiated interventions into a water management system that functions at the scale of the city.

But what if the problem of creating permeability in the urban surface were given the funding on the scale of a waterfront restoration project? After all, cities are brimming with these. We have already mentioned a few on this blog. Half of all the awards given this and last year by the American Society of Landscape Architecture for planning projects were river or coast revitalization projects. Big projects like the East River Waterfront Esplanade, the Toronto Central Waterfront and the Los Angeles River Revitalization are posed as centralized offerings of public space, alternative means of circulation and recreation. But couldn't — or shouldn't — the same public space be provided, in distributed fashion, throughout the city? Big urban waterfront projects make an attempt at hydrological and ecological sensitivity. But aren't they as likely to sever these systems by circumscribing a system that functions in terms of surfaces and watersheds? In short, I am arguing that big waterfront projects are soooooo 20th century and that now it is critical to amplify the efforts started by organizations like PlantSF in order to bundle the needs of communities with the needs of the urban/social/hydrological/ecological system. We need more jack-hammers and shovels. And we need to get a little Matta-Clark on our streets and sidewalks. 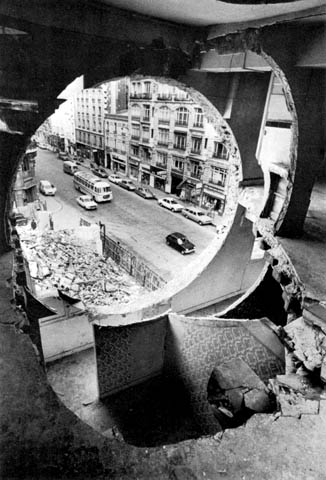 A Brazilian architect working in São Paulo proposed a fantastically anti-mega waterfront project at the 2007 International Architecture Biennale in Rotterdam. I interviewed the author, Fernando de Mello Franco, at his office then about the project and have recently revisited his work as it has evolved over the last two years in international lectures and seminars. In particular, I have been interested in how he has refined the political and economic strategies that the project triggered.

The existing infrastructure of São Paulo is a product of the landscape. In a city spanning ridges, transportation networks and their attendant industrial development followed--and ultimately transformed--the floodplains in the valleys offering ideal grades, access to water, and unclaimed territory. Rail, hydroelectricity, roads--the instruments of production and wealth in the city--were concentrated along these arteries. Fluid though the infrastructure was, it divided the city into a "constellation of discontinuous sectors". The periphery filled in but was unable to access these cores of the productive city. 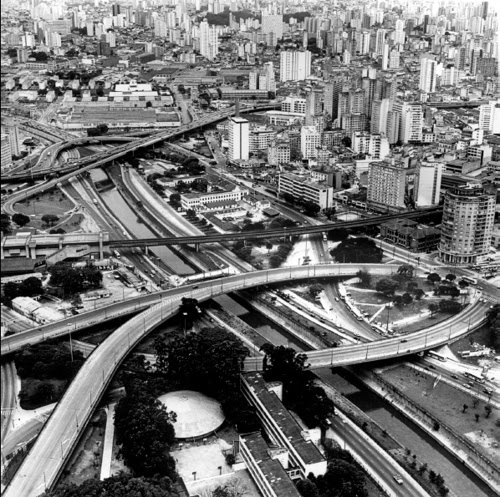 After a century of uncontrolled growth the peripheries began to matter. With most of the ground occupied, the water catchments became impervious. Water moved quickly from the ridges of the periphery to the lowest spots in the city. The flat valleys and all the low-lying transportation and service corridors were subject to periodic flash-flooding, which in turn crippled the productive economy of the city. Instead of increasing the capacity of the low-lying rivers at the center of the city, the government sought a long-term solution and decided to restore some measure of permeability back to the city by excavating the periphery.

The city is halfway through building 131 of these retention basins, in portuguese "piscinões" — literally "big swimming pools"— that will draw excess water from overflowing streams and detain it \long enough to diminish the surge volumes of water arriving at locations downstream. Because of the uncontrolled growth however, the pools must be 'extracted' from the existing urban fabric: homes must be relocated, roads realigned, community assets replaced. For hydrological, but also for economic and practical reasons, the piscinões constructed or planned fall largely in the poor, peripheral areas of the metropolitan region. In effect, the issue of flooding (which is largely a problem of the center and of the formal sector) is being resolved in areas that stand to gain the least from that solution. 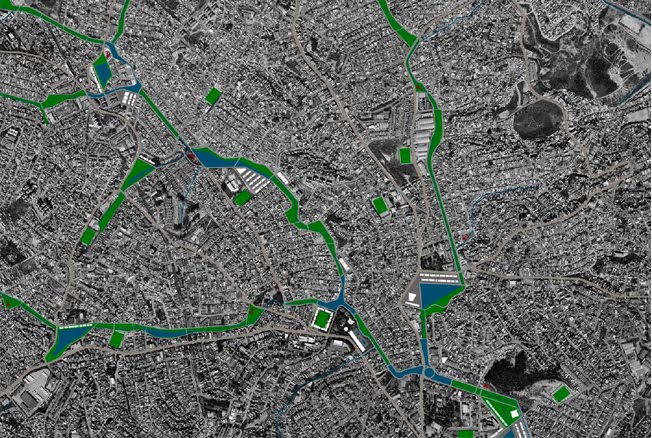 With a proposal entitled "Watery Voids" Fernando argues that this network of piscinões and the logic of flood control can be an opportunity to introduce a landscape-based urban structure in these informal areas. Investments to protect the center might be used in such a way that combines with other works in the area (like housing projects and mini water treatment facilities) to offer a more amenable solution within these communities. Instead of the craters that are now built, Fernando imagines strings and bulbs of greened subtractions that reorganize settlement around a working landscape. What's more, the maintenance and operation of these infrastructural landscapes might legitimize local organization centered on each sub-watershed.

I hope that Fernando's vision gains traction in São Paulo and that as we build responsible hydrological system in our own cities we might find such fortuitous hybrid solutions.

Credits: Gordon Matta Clark's Conical Intersect was found at artnet.com. The black and white aerial of the bundled infrastructure in S.P. is by Nelson Kon and found here. The photographs of the piscinoes were taken by the author. Fernando's plan is part of his presentation at the Urban Age Conference, which can be downloaded here.