An Interview With David Satterthwaite


David Satterthwaite is a development planner who actively promotes intensive research and knowledge circulation on human settlement issues such as building the resilience of the urban poor and enabling successful adaptation to climate change.  He advises several international agencies on urban policy, is an editor of the international journal Environment and Urbanization, and works as a senior fellow at the International Institute for Environment and Development (IIED).  In addition he is a college teaching fellow at the Development Planning Unit of University College London.  We are thrilled to include below a brief interview that highlights several areas of interest within his current research. 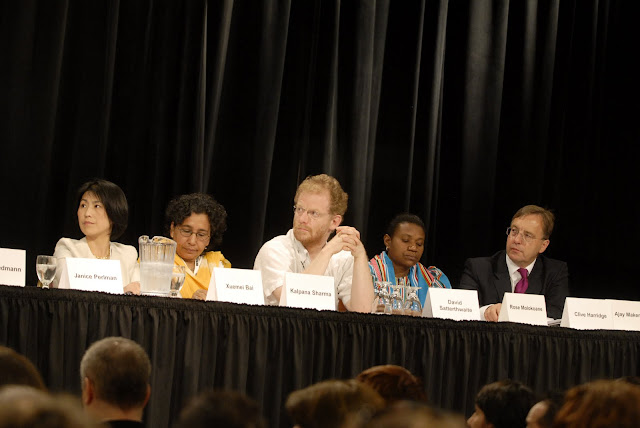 Could you tell us a bit about your work with IIED?

I work mostly on issues linked to urban poverty and poverty reduction in the Global South.  Two main topics: understanding and acting on the life and health threatening risks that low-income groups so often face (including those related to climate change), and supporting the organizations formed by the urban poor (for instance national federations of slum/shack dwellers) in their initiatives and in addressing their priorities.  I also edit the international journal Environment and Urbanization.

In which areas are you currently doing fieldwork?

Much of my work is supporting research undertaken by researchers, practitioners and activists in the Global South.  This currently includes groups in the Philippines, Argentina and Zambia looking at the inadequacies in how poverty lines are calculated (so they greatly under-estimate the scale of poverty).  Also, local NGOs and grassroots organizations in various nations considering how they address the environmental risks they face, including those related to extreme weather and/or those that climate change is likely to exacerbate.  Helping to document the ways in which federations of slum/shack dwellers act to address their needs and the tools and methods that they use.

What can be done to aid the world’s largest greenhouse gas emitters in understanding the urgency of forced migration due to climate change that some areas of lower income countries are already facing?

There is a fair amount of nonsense talked about ‘hundreds of millions’ of environmental refugees or climate refugees.  As my colleague Cecilia Tacoli and a network of researchers with whom she works has shown, most migration should be understood as adaptation (people making sensible informed choices to move) and most migration happens within national boundaries.  Most ‘emergency’ migration after disasters is also local.  Of course people will move as climate change (or economic change) changes the spatial distribution of new investment and economic opportunity and of water availability.  Of course it is very urgent that the nations with the highest emissions and the people with high-consumption lifestyles (which are what underpins most greenhouse gas emissions) change – otherwise we will not avoid ‘dangerous’ climate change.  And this dangerous climate change will hit low and middle income nations much harder, even as many such nations still have low levels of greenhouse gas emissions per person.  The impacts of climate change are very unfair as they mostly hit or will hit low-income groups and low-income nations (and their cities) far harder.  They also transfer costs from recent and current emissions to the future so the inequity is also inter-generational.

Do you think communicative tools such as vulnerability mapping are the most effective way to demonstrate risk?

This helps, but the reason for so much vulnerability within urban populations is that they live in informal settlements to which the government agencies refuse to provide basic infrastructure and services.  And low-income groups often settle on land that is at risk from landslides or floods because this is the only land they can afford or can settle on (if they used better quality land they would be evicted).  This is a problem that has been evident for many decades.  We have also had statistics showing infant and child mortality rates ten to twenty times higher than they should be in many such informal settlements.  Such evidence does not necessarily make governments listen to and work with their low income population so why should maps that show the vulnerability of many low-income groups and their settlements?

The easiest way to mitigate climate change is for wealthier nations and wealthier groups to dramatically cut their emissions.  If and when they do, there is more chance of getting the successful low and middle income nations with rising emissions to also accept the need to keep down emissions.  Rather than worrying about possible wars and migrations, let's worry about getting in place the mitigation policies that keep down the impacts and the adaptation policies that help build resilience among those most at risk.

What are the best ways to access the inherent resourcefulness and resilience of the urban poor?

Learn to listen to them.  Learn from them.  Not try to think you are ‘the expert’ (they usually have more knowledge than you on almost all aspects of development).  Let them develop and set their agenda for action and for change (and negotiation with local governments and other groups).  See how you can help.  This is easier where slum/shack dwellers have formed their own representative organizations and federations, as they have done in over 20 nations - see Shack / Slum Dwellers International.

Credits: Image of David Satterthwaite and discussion panel from the International Institute for Sustainable Development.