The Just Metropolis: Getting to First Principles from Paper Tubes


Shigeru Ban's work in humanitarian aid architecture with paper tube structures, and Elemental's work in social housing for 100 families living in the Quinta Monroy inner-city settlement in Iquique, Chile are often touted for their innovative contributions to design thinking in crisis situations, such as disaster relief and social housing in high-density areas. Beyond these more obvious contributions, the two projects offer some thought-provoking points for considering the principles of building a just metropolis.

Justice starts with appropriate solutions tackled locally and in context 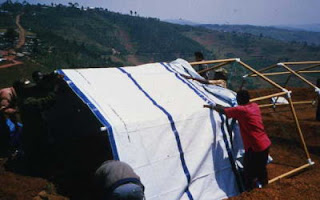 
In the realm of engineering design for extreme affordability, the notion of "appropriate technologies" is invoked time and again: engineers are reminded not to force-fit high technology in the name of development, but to return to the simplest approaches for finding local and contextually relevant solutions to the target group's most fundamental needs or problems (i.e. simply put, we need a water pump, not an iPad). In Shigeru Ban's interview with Verb, he is asked if he chose the paper tube for building refugee shelters in Rwanda because it was a strong and cheap material:

In the beginning that was not the intention. In the case of an emergency situation, the price of construction materials rises because they are in short supply. And it costs a lot to ship them in from far away. So it is very effective to use a material that is not made for construction. The paper tube is a material that is very easy to obtain and you can find paper tube factories almost anywhere, even in Rwanda. (Shigeru Ban, Crisis, Architecture Boogazine)

Coming into a situation of humanitarian crisis, the role of the engineer, architect, aid worker and political official become one and the same: to rectify a situation of injustice or disproportionate consequence to the local populace through the rigor of appropriate - and not necessarily bombastic - solutions that address a situation of scarcity and immense immediate need. I'm reminded of architect Annabelle Selldorf's interview with Charlie Rose who, when asked about her guiding principles, mentions, "I think that you start with listening very carefully to what the mandate is. Unlike some architects, ours is not an architecture of grand gestures or monumental statements, but rather sort of subtle interventions."

In situations of crisis, the smallest gestures of sensitivity towards imbalance and justice also matter, as Ban notes, "[...]in the case of Sri Lanka [after the 2004 tsunami] the government drew up a standard housing plan. Other NGOs were also building houses using different materials, but everybody was following the standard plan. If some houses were noticeably larger than others, that would cause a problem." In many ways, situations of crisis in cities and metropolises present a constrained and fragile environment to stress-test just solutions.

If the set of just solutions can withstand this stress-testing, there is a good chance that such solutions can be scaled or distributed globally. After Ban had built the paper church in response to humanitarian need from the Kobe earthquake, it was then donated and moved to Taiwan following the 1999 earthquake there. In Ban's words, the paper church was then "reconstructed to start a second life." 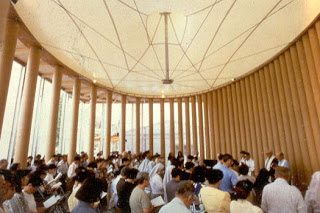 A just solution = freedom to participate in crafting the solution

The notion of justice is often intertwined with the freedom to participate in the process of bringing justice - there is some inherent sense if you have a say in some part of the solution that is being crafted for a community of which you're a part, the solution is more likely to be just. The fine balance here is to provide a solution framework that is flexible but also sufficiently structured so that it doesn't fall into the impasse of a plurality of opinions. Elemental's work in participatory social housing for Iquique, Chile is an interesting example of this balance. In demolishing and rebuilding the inner-city slum in Iquique, Elemental opted for a design that provided a sound and regular structure according to building standards, while providing relief between the structures so that residents have the liberty to fill in, construct, and customize these spaces in a similar manner that they had been accustomed to doing in the previous incarnation of their living space. 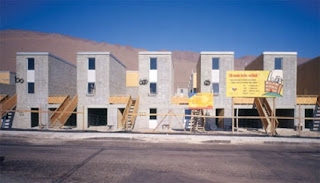 Elemental's homes to replace the Iquique's barrio shortly after completion. 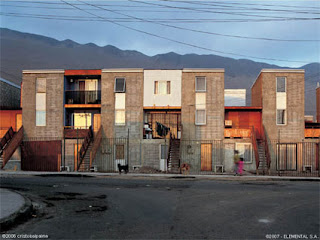 Elemental's homes after the residents had moved in.