In a 2007 campaign speech, Obama talked about his plan for improving urban areas and fighting poverty around the country and introduced the idea of Promise Neighborhoods. Promise Neighborhoods is an urban development plan that is designed around education and schools, and is inspired by the Harlem Children’s Zone. Promise Neighborhood grants, administered by the Department of Education, will provide funds to community-based organizations to develop comprehensive services for children, from birth through college, and high-quality education. The idea is to sponsor 20 neighborhoods around the country to pilot the Harlem Children’s Zone model. 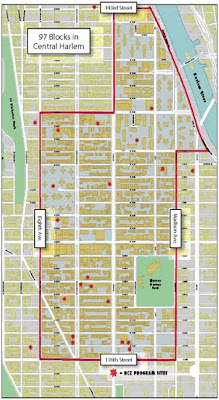 Harlem Children’s Zone began in 1970 and worked through the crack epidemic that devastated Harlem in the 1980s, and inspired the model that was piloted in the 1990s. The pilot program focused comprehensive support services on a single city block in Harlem, and as they describe on their website: “The idea was to address all the problems that poor families were facing: from crumbling apartments to failing schools, from violent crime to chronic health problems.” The project has steadily grown, from a 24 block area in 1997, to almost 100 blocks today. HCZ serves more than 10,000 children and 7,400 adults with an annual budget of $75 million. The pipeline of services includes programs that target children of all ages, including Baby College (workshops for parents of children 0 to 3 years old), after-school programs, health and community building programs. The program has two educational tracks: the Promise Academy charter schools and the public schools within the Zone. In the spring of 2010, 100% of third graders in Promise Academy I and II scored at or above grade level on statewide math tests. The results have been striking and have attracted national attention and praise, and have been identified by Obama, among others, as the future for addressing urban poverty.

The big question is whether or not this model can be replicated around the country. In the spring 2010 issue of Good magazine, they examine what the program would look like in 4 struggling cities: Newark, New Jersey, Baltimore, Maryland, Austin, Texas and San Diego, California. The article discusses different elements that could be considered essential for the success of the Promise Neighborhood grants – from involved and dedicated mayors to crime rates. HCZ has already started thinking about the replicability of the program: on their website, there is a link if you are “interested in adapting the HCZ model for your community?” which takes you to a page on their Practitioner's Institute program, in which they invite community organizations to a multi-day training on the HCZ model. There is one major study on the HCZ and its success and scalability and presumably Obama’s Promise Neighborhoods will not only inspire more studies on HCZ and the opportunity to test the studies, but also inspire the evaluation of other poverty alleviation and urban planning models that are being tried across the country.

In 2010, Congress appropriated $10 million to fund 20 on-year planning grants to develop a plan for a Promise Neighborhood program. The 2011 budget, if approved, will fund the program with $200 million to pay for more planning grants and five-year implementation grants, administered by the Department of Education.