The Just Metropolis: Importance of Process

Living in and experiencing a truly just metropolis today seems more elusive than ever, as social inequities and oppression only grow daily, manifesting at multiple levels in cities across the world. One small example of these spaces of exclusion is the photograph below in Puerto Madero, Buenos Aires, an area built during the pinnacle of Argentina’s hyper-neoliberal growth era. Filled with expensive foreign-owned restaurants and hotels, in the background nicely groomed footpaths and skyscrapers are visible while the only popular memory is a boarded up community kitchen. The sign ironically reads: “we fight for an Argentina where the dogs of the rich are no longer better fed than the children of the poor.” 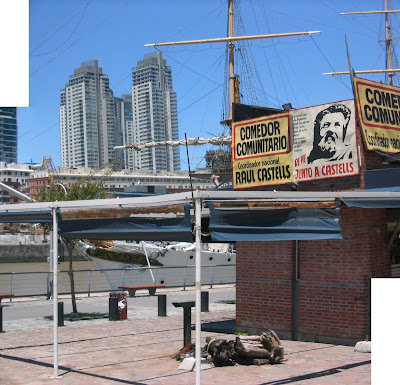 Although these kind of elitist spaces are the unfortunate reality of too many cities across the world, I believe that having ideals on what a just city means and might look like is critical, not just in terms of outcome but also process. A just metropolis must consider not only who gets how much of what, but the process by which distribution occurs, including who is involved in deciding or denying, as well as how participation, diversity and enablement are included or excluded.

Process is key in understanding and particularly operationalising social justice in cities because as Iris Marion Young in Justice and the Politics of Difference (1990) notes social structures, power relations and institutional contexts often dictate distributive patterns and outcomes, meaning that it is fundamental to take into account underlying relations (of power, class, gender, ability etc.) embedded in process which are dynamic and constantly negotiated. A socially just metropolis moves ‘beyond tolerance’ to work with ‘voices from the borderlands’ as Leonie Sandercock notes, the dwellers of the multicultural city who are often marginalised and are an every-growing reality in our globalised world.

Such a process will only become a reality through struggles towards rights to the city that challenge the status quo and shift dominant paradigms and discourses so deeply embedded in our existing system – in essence towards a transformation of the city, of processes and spaces as we know them. Community kitchens, urban agriculture, affordable housing, participatory budgets and bottom-up design and planning of local areas alongside collaborating strategically through alliance-building, mobilising and taking to the streets are a few ideas on what some elements might look like in practice. I look forward to hearing about discussions regarding the opportunities and actions needed towards such transformations that come out of the conference this June.