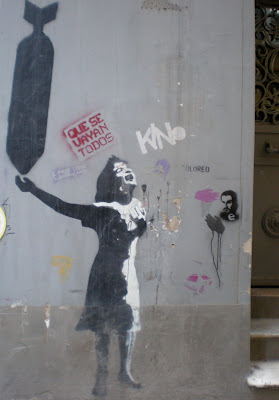 Wandering through the area around the Galata Tower, Beyoglu District, in Istanbul I was surprised to come across streets and alleyways filled with stenciling and often provocative, challenging street art, such as the image above of the young girl crying out while almost caressing an enormous bomb falling from the sky. Something that especially caught my eye, sprinkled on walls across this old Genovese quarter of the city, was a stencil you can see in the in the image above the young girl’s head that says “que se vayan todos” (roughly translated as “away with them all”), a phrase (and song) I remember so clearly from living in Buenos Aires during the 2001 economic crisis. In this context it was used to express the complete disillusion and outrage with the economic injustices the average person was experiencing while watching government and private sector elites stuff their pockets with bribes and supposed societal benefits, to express their rage at the failure of Argentina’s apparently magic neoliberal recipe as prescribed by the IMF in the early 1990s. Often accompanied with the cacerolazo (banging of pots and pans) protests taking over Buenos Aires and other Argentine cities, it was passionately sung to in essence tell these people sucking the blood out of the country to get the hell out.

While this expression of collective rage through cacerolazos has manifested in various other cities in countries across the world as noted by Naomi Klein during this more recent economic crisis, it is interesting to see the phrase emerging through stencils in Istanbul. 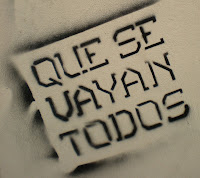 One of the 2010 European Capitals of Culture and global city aspirant, the neoliberal capitalist model that elite sectors of Turkish society are pursuing is clearly being contested by others. Indeed, in learning about one of the thousands of layers of Istanbul through meetings with various communities undergoing urban transformation projects - as subjects and even objects in some cases rather than participants or drivers - it was clear that there is resistance in many places to this process. What was never made clear to me is what sort of alternative imaginaries and visions exist for the city? After “away with them all,” where to next?