I understand a just metropolis as one in which its government, and the society it represents, have the elimination of social and environmental injustices as their main priority. When diagnosing such injustices, one must ask:
As of a few decades ago, cities have been experiencing a trend that is rather worrisome: the walled neighbourhoods as explicit, physical forms of exclusion. I'll take this chance to make a short analysis of this challenging issue, as I see it as a very good example of how cities are, in most cases, unjust. Indeed, eliminating such forms of exclusion is a prerequisite for achieving a just metropolis.

As Jordi Borja has recently pointed out (in Spanish), the "security" walls dividing rich from poor neighbourhoods, also known in Latin America as "condominios" or "barrios cerrados", exclude overexploited and marginalized social sectors. Walled wealthy neighbourhoods can consist of few houses, entire serviced neighbourhoods (such as the UN Gigiri Compound in Nairobi) or entire cities (such as the two Jerusalems, one for the well provided Israelis, the other for the exploited, plundered Palestinians).

The first point is that these compounds reflect the accumulation of disproportioned benefits of economic development processes, such as producer services and financial investments. On the other side of the walls, citizens often bear the burden of inadequate infrastructure services, insecurity of tenure and exploitative jobs. These walls, more often than not, protect the rich from the possible reactions to this kind of inequality, sometimes in the form of social protest, sometimes in the form of organized crime. 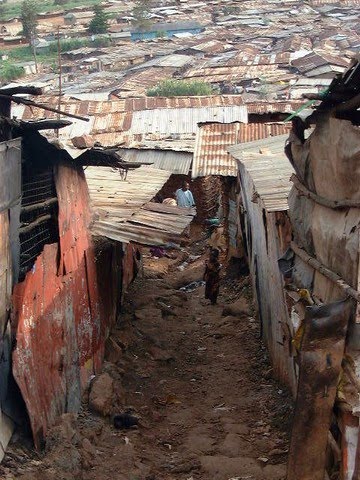 It can be said that one cannot question that all in-wall residents deserve and merit their accumulated wealth. However, it is not justifiable that an informal trader, a factory worker or a maid, deserve earning less than what is needed for schooling, have a minimum, secure living space, or having access to a clean toilet and safe drinking water. This is the condition of about one billion people around the globe.

Thirdly, can we explain, without a racist or xenophobic discourse, why the proportion of black, immigrant, indigenous people is much higher in the poor city than inside the walled compounds? Isn't this enough proof of institutionalized forms of oppression and domination? Moreover, walled compounds are territorial expressions of divided societies, reflecting the despise that middle-high class often feel towards lower classes. This despise is itself a form of oppression and is often the argument for the domination exercised by one social group over the others.

Finally, there have been plenty of examples of how anybody can thrive and fulfil themselves when given adequate support, from individual citizens to full communities. Compound walls, then, not only protect owners and their properties, but they also protect opportunities from being used by common citizens.