The Epic Spaces of Tom Gauld 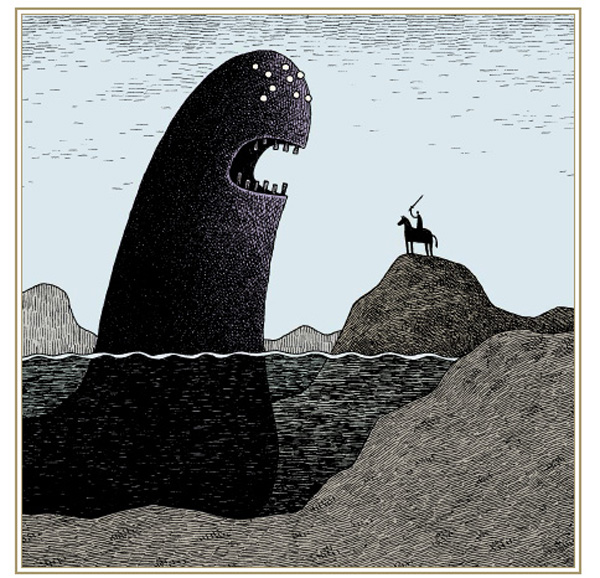 In a previous post, I wrote about how graphic representation can mobilize a polemic on urbanism based on alternative visions of the city. In this post, I continue the exploration of space and representation by interviewing Tom Gauld, a Scottish graphic artist whose work allows us to consider how representations can capture the epic quality of intimate spaces, landscapes and urban escapes with irony, humor and existential sensibility.

What makes a good graphic story, in your opinion? Who are some of your favorite graphic artists?

I really like it when a comic or graphic story is more than a text with accompanying pictures: when the story is created using the language of comic and the interplay between its different elements — pictures, page layout, narration, dialogue, etc.

I like comic artists who bring me back to their world each time I re-read them. I particularly like Edward Gorey, Chris Ware, Dan Clowes and, more recently, I’ve gotten into Jon McNaught’s work. 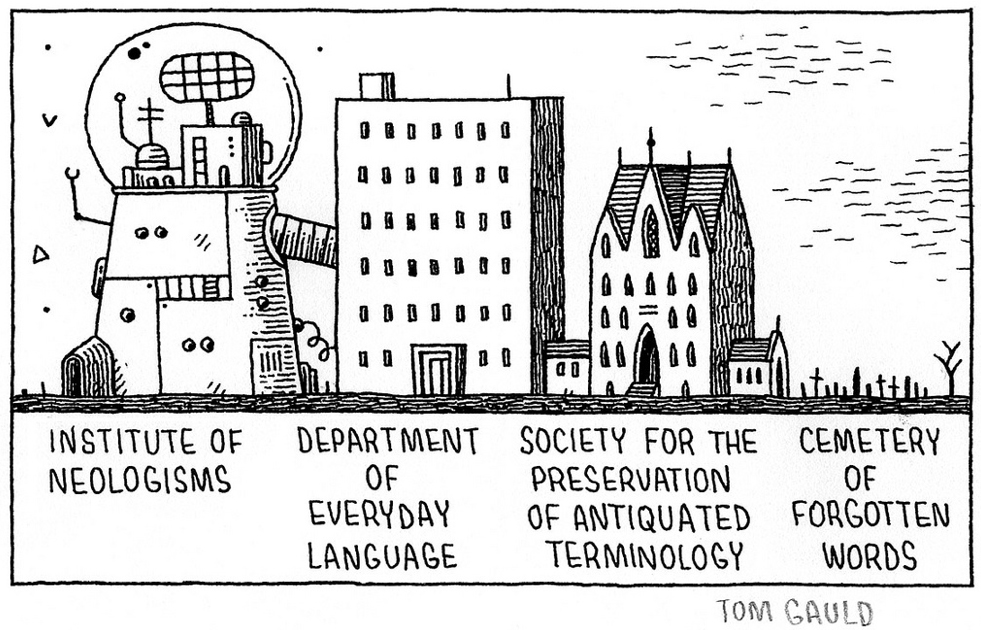 What subjects do like to draw about? Where do you find them?

I like to take an existing story, historical event or a genre as a starting point, and then looking at it from an unusual point of view. I’m often drawn to heroic figures or grand subjects. I really like drawing epic storylines with mundane and everyday circumstances. Hopefully the humor and interest in my work comes from the disconnect between strange, epic narrative and human ordinariness. 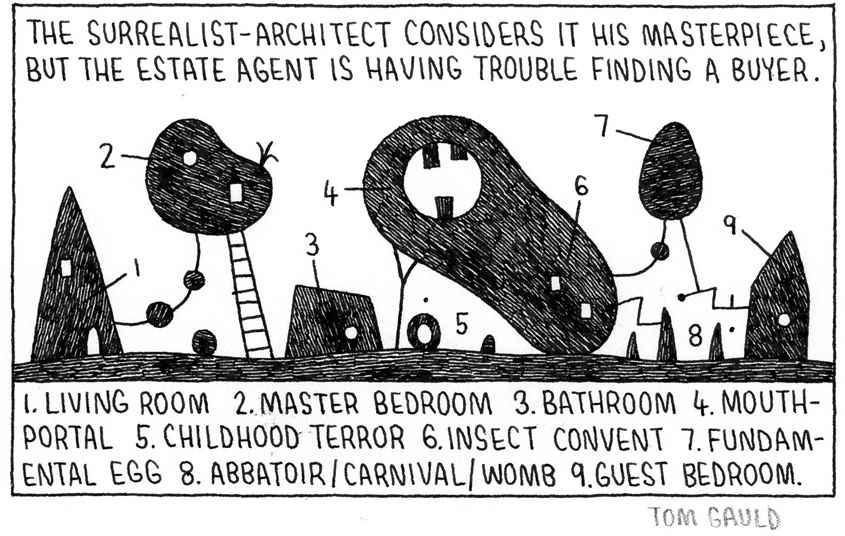 How do you approach an idea for a story? Do you draw from observation, memory, sheer inspiration?

I suppose there must be some observation and memory involved but mostly I'm just sitting quietly making things up. I do some research for most stories but that's more like looking up topics that inspire me than trying to get things "right." I’ll spend quite a lot of time playing around with the idea in my sketchbooks in quick, rough versions before moving onto the final version. 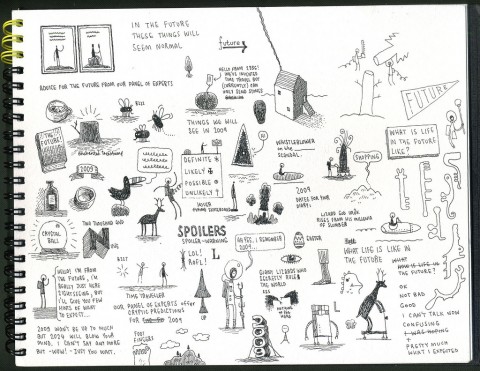 The sketchbook is an essential companion for your work. Can you tell us some of the habits that you have developed to make it a useful and efficient tool?

When I was at college I was scared of sketchbooks. I felt each page had to be a finished work of art and even if I drew something nice I’d worry that I’d mess up the whole book on the next page. Now I think of them as useful notebooks rather than works of art. I try not to be too precious and will write a shopping list or let my kids doodle in them. If a page ends up looking nice I might show it on Flickr, but I try not to think about this while I’m working. I might spend half a page of a sketchbook working something out then come back the next day and work on something completely different on the same page but the juxtaposition of the two might end up sparking a completely new idea. There are lots of half-formed ideas and stories that I’ve pinned down in my sketchbooks that I can (hopefully) return to later.

Much of your graphic work is filled with humor, irony and an existential sense of life. These themes are explored through playful juxtapositions of scale, texture, sequential frames, solids, voids and other graphic techniques that provoke surprise and curiosity. How do you choose a technique to represent a story?

It's a bit of a balancing act between clearly and simply telling the story (or depicting an idea) and keeping the reader/viewer interested visually. I find all the formal decisions in making a comic fascinating. It's such fun to start with a blank page and then chop it up into panels and play around with images, words, repetitions, rhythms, compositions. 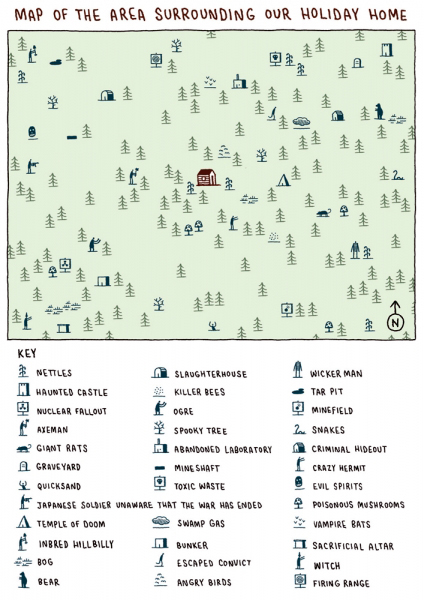 One my favorite cartoons is "Map of the area surrounding our holiday home" because in it you use symbols to convey a sense of suburban geography that is ultimately intimate and personal, but also mythical and open to interpretation. Do you consider space a character in your work?

I hadn't really thought of it like that, but I do like making up the worlds where my comics happen. I’ve made hardly any stories set in the real world of today, I don’t try and capture what I see around me, I prefer to build a new world up from nothing. These imaginary worlds are three-dimensional, and I’ll often draw a map of where the story takes place, but I’m not very interested in perspective and the actual images in most of my comics are quite flat and diagrammatic. Comics are really diagrams of a story and I find myself drawn to maps and information graphics. I also like the idea of taking something serious and precise like a map and using it to describe something which is pretty silly. 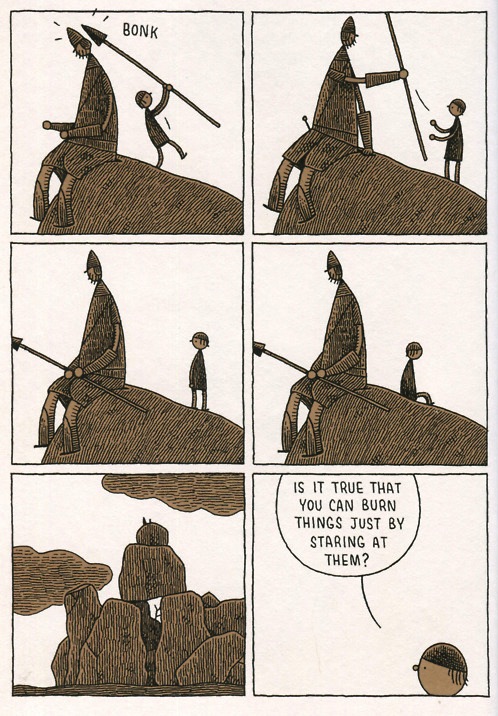 How has your work evolved over time and how do you see it evolving in the future?

I think the drawing and design has got a bit simpler and clearer, and I’ve become more confident with words. I’ve drawn compulsively since I was tiny and I studied illustration because all I really wanted to do was draw all day long, but the more comics I make the more I get into storytelling and working with words. This year I published my first longer narrative, "Goliath," and I’d like to work more on longer stories.

To find out the latest on Tom Gauld’s work, you can visit his website here.