Did you know that 660 million Indians have no access to sanitary facilities for relieving themselves? A staggering 2.5 billion people worldwide have to cope with this lack, while 1.1 billion are forced to practice open defecation. In cities this often means defecating in ditches or on rail tracks. Can you imagine being the one in three people who does not have a toilet or clean water?

Observed on Nov. 19 each year since 2001, the purpose of World Toilet Day is to raise awareness and bring people together to address global sanitation problems. The organizers are coordinating multiple events worldwide. Among them is an interactive sculpture of a four-and-a-half meter tall squatting figure beside London's Tower Bridge. Titled "The Public Toilet," the sculpture's face will act as a screen for projecting videos and photos sent by supporters from around the world.

Access to sanitation and water was recognized in 2010 by the United Nations General Assembly as a basic human right. Lack of access to safe and sanitary facilities disproportionately affects people in Sub-Saharan Africa and Southeast Asia. But while the U.N. decision was considered a breakthrough at the time, many agree that a more concerted effort is needed to tackle the current situation.

For World Toilet Day, "Why Poverty?" has released a short comical film to break the taboo around the issue of toilets and sanitation. While there is a strong link between lack of access to toilets and poverty, gender further complicates the issue. For adolescent girls in developing countries, access to clean and safe toilet facilities is a surprisingly accurate indicator of success later in life. In India, research has shown that 23 percent of girls without access to private hygienic facilities drop out of school when they reach puberty, and are more likely to suffer from health problems.

In a witty and important documentary about toilets in Mumbai, film-maker Paromita Vohra explores the "gendering" of public toilet space in the city. Produced in 2006, the film's central theme is reflected in the title "Q2P." It asks a simple question: Who needs to queue to pee in Mumbai? The film reveals an underlying story about gender and exclusion, touching on a variety of issues affecting women of all classes and ages when it comes to accessing toilets in the city. Urban planners often omit public toilets from their plans, and many privately run public toilets charge more for women than for men. 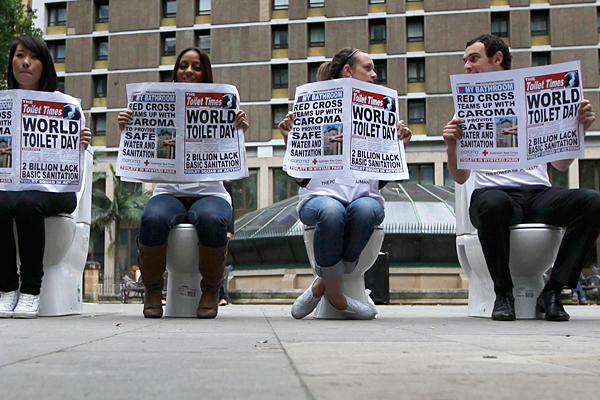 In considering what creates a just city, safe access to sanitation and toilets seems the most obvious first step in guaranteeing the dignity of all citizens. Paromita Vohra rightly observes that the same silence that surrounds discussions of inequality surrounds her questions about toilets. Solving this problem is not an issue of technological and scientific innovation, but of securing the political support of those who prefer to ignore poverty.