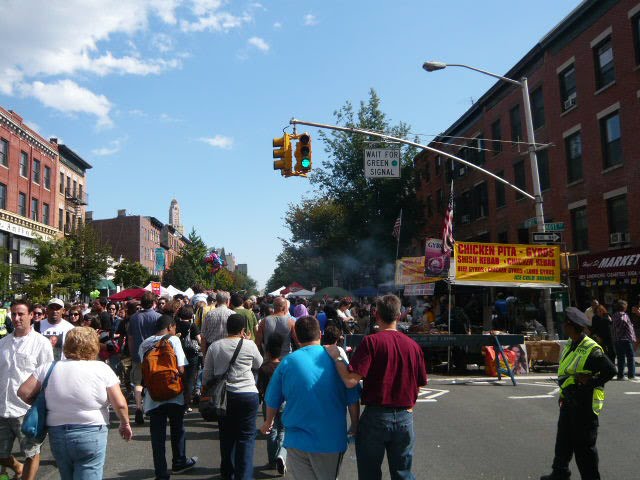 Today Sunday October 5th was a beautiful day to go out and enjoy the Atlantic Antic, annual street fair in Downtown Brooklyn. Atlantic Avenue is a main thoroughfare in Downtown Brooklyn Usually teaming with cars. For an entire afternoon the street is shut off to vehicular traffic and gives way to pedestrians.

Plastered with a diversity of people, food - labeled "ethnic" by several passers-by - good music, and variety of merchants selling everything from Antiques, to toys, books, records, clothing and all other types of things you can usually find at a flea market.

If there is one great thing about Brooklyn summers it is the plethora of block parties and street fairs that divert vehicular traffic, but allow us to reclaim our streets if even for a couple of hours.
There has been somewhat of a resurgence of sorts in the flea market culture in Brooklyn over the last couple of years. For the last couple of summers, the Brooklyn Flea has been running a popular flea market in Fort Greene and more recently under the Brooklyn Bridge. Not too far, the Myrtle Avenue Revitalization Project has also been coordinating several street fairs on Clinton and Myrtle Avenues in Clinton Hill (Downtown Brooklyn). Even though the Atlantic Antic is not a new thing, a 35 year Institution, as described on their website, it has struck me this year as much busier than other years. The African Street Festival, which was given a different venue this year at a large park rather than a street, was also heavily attended.

These events provide a great opportunity to simply go out and people watch, do some shopping, and generally just relax. Perhaps cementing my sentiment of the growth in popularity of Brooklyn's street fairs was spotting Mayor Bloomberg there today who has been spotted in different parts of Brooklyn over the last couple of years. A growing fondness for the borough perhaps attributable to the many current project ranging from the controversial Atlantic Yards
Net Stadium to the creation and expansion of the State sponsored Brooklyn Bridge Park, the renaissance of DUMBO, the slow but steady expansion of Metro Tech and many other residential developments and rezoning plans. No matter what the reason for the popularity in the street fairs they remain a great tool for local economic development, providing promotion for the local stores as well as the home-business moguls and the reclaiming of our streets!