After growing up with an image of Moscow as bleak and inhospitable, I was surprised to find so many attractive parks there. According to the Moscow Wikipedia entry, there are 96 parks, 18 public gardens, and 100 square kilometers of forest within the city limits. These figures come from a Russian government site that is currently not accessible, but they seem fairly accurate. The entry provides an estimate of 27 square meters of parkland per citizen, compared with 8.6 in New York, 7.5 in London, and 6 in Paris. Besides official parks, there are countless tree-lined paths, landscaped squares, and other plantings throughout the city.

It seems that crews of workers are always performing maintenance, although I've heard that parks are neglected in some parts of the city. Many have simple dirt paths that weave through dense foliage. It can seem like you're in the middle of the wilderness, even though busy streets are never far away. Many parks have flowerbeds, benches, ponds, statues, fountains, and playgrounds. These additions are beautiful in the way of functional, durable, understated things. Of course, there are also grandiose structures from the past, but these are counterbalanced by views of birch trees that sparkle against deep forest backgrounds. 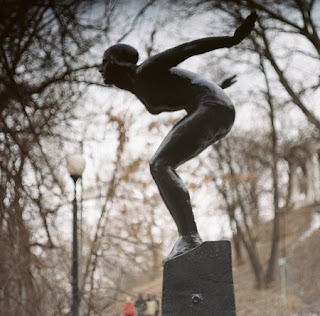 Moscow's parks are highly accessible. They can be found within walking distance of any residential area and on the metro, bus, and tram lines. My favorite is Neskuchny (Not Boring) Garden, which lines the Moscow River just southwest of Gorky Park. It has restful paths, a public amphitheater, and this statue of a swimmer facing the river. Neskuchny Garden leads to Vorobyovy Hills, where a majestic ski jump (complete with working chairlift) watches over the city. Izmailovsky Park covers over 15 square kilometers. To give a sense of scale, Central Park in New York covers 3.4 square kilometers. Sokolniki, another expansive city park, borders Losiny Island National Park, which has an area of 116 square kilometers (thanks again to Moscow's Wikipedia page for these numbers). The Botanical Garden of the Russian Academy of Sciences is vast and multifaceted, with exhibitions, research facilities, exotic plants, greenhouses, streams, and old-growth forest. Moscow University runs a botanical garden just north of the garden ring, which was built over 300 years ago as a source of medicinal herbs. Trees grow through the stone wall that surrounds it.

Parks in Moscow reflect the influence of historic ideas on urban landscapes. There are elements of feudalism, socialism, and capitalism. There is monarchy, anarchy, religion, modernism, and postmodernism. I think I will do a series on the history of Moscow's public park system. Each post could look at the influence of a different era: first, the rise of new ideas that culminated in socialist visions for the city; second, Stalin; third, Khrushchev and Brezhnev in Stalin's wake; fourth, perestroika and the end of the Soviet state; fifth, economic crisis, recovery, and capitalist development. In looking at how different ideas shape urban landscapes, there may be lessons for improving the quality of life in cities.

Credits: Photo of Chistye Prudy Park by Peter Sigrist. Photo of a statue in Neskuchny Garden by trueol.