Only in Shrinking Cities 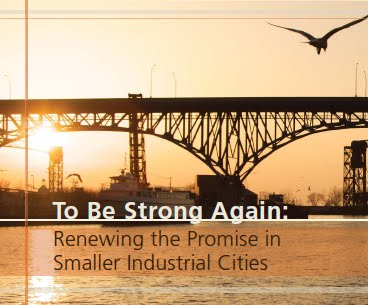 Shrinking cities can be understood as the future of American urban planning and development, showcasing successful green pilot programs, highlighting inclusive planning and government policies, and leveraging regional cooperation to boost large areas of the country. In a 2008 PolicyLink paper on these cities (which are dubbed “smaller industrial cities” by the paper but used the same definition I used for shrinking cities in my last article), they argue that “smaller industrial cities may, in fact, lead the way in forging regional answers to America’s development challenges. By cooperating with each other and with smaller jurisdictions in their regions, smaller industrial cities can not only address some of their problems in a more integrated way, but they also can model the kind of regional thinking that the nation needs to maintain its global competitiveness.”

One interesting observation made in the PolicyLink paper is that smaller industrial cities tend to do either significantly worse or significantly better than large cities in different categories measuring the quality of life. For example, from 1990 to 2000, smaller cities were 163% more likely than larger cities to have experienced employment growth but they were also 60% more likely to have experienced steep employment loss (over 15%) and steep losses were often steeper, like Flint’s 34% drop. The paper notes that blacks and Hispanics are more likely to fare much better or much worse in smaller cities.

One lesson to learn from this observation is that renewal strategies and development plans for shrinking cities cannot be smaller versions of renewal plans for big cities. As I described in my last article, part of the focus of the Youngstown, Ohio plan, Youngstown 2010, is to reconceptualize the understanding of Youngstown as a successful smaller city. Renewal cannot be understood as growth, but as improving and developing a smaller city. Part of successfully creating these plans relies on understanding the inherent benefits in shrinking cities, as I described in Youngstown and as summarized in the PolicyLink article as “– lovingly tended historic districts, unparalleled waterfronts and parks, colleges and universities, and grand cultural institutions”. Renewal strategies should understand the city as fitting a niche and offering amenities that large cities cannot – the cities can be presented as the best of both worlds, often linked or physically close to a large city, but providing the intimacy and cultural and historical wealth absent in large cities.

The smallness of these cities is one of their biggest assets. Government is often tighter and less bureaucratic, and is therefore more accessible, representative and flexible. It is easier to form networks between residents, non-profit organizations, government officials and business leaders. Cities can become laboratories for urban innovations, providing the ability to test creative ideas or extraordinary pilot programs, partly because of government’s flexibility. Additionally, the smaller scale compresses the timeline needed to see results, allowing for more rapid response, improvement and follow-up. Smaller cities attract new leaders and entrepreneurs because there are fewer barriers to enter and establish yourself or your business.

There are 151 cities in the U.S. that can be defined as shrinking cities, including more than 7.4 million people. As described in the PolicyLink paper, these cities are concentrated in Pennsylvania, New York and Ohio, and have been hit hardest by the recent economic downturn. “They have slipped from the national consciousness, all but forgotten outside their own regions”, Radhika Fox and Miriam Axel-Lute argue in PolicyLink, which is damaging for the cities but also a missed opportunity for the U.S. The innovative projects and urban plans introduced, and experimented with, in shrinking cities exemplify a bold and sustainable way of approaching urban development for the entire country, relying on key components such as smart growth, green innovations and regional cooperation and resources.

For more information on some innovative and exciting plans, policies and approaches to smaller cities in the U.S., see PolicyLink’s 2008 paper: To Be Strong Again: Renewing the Promise in Smaller Industrial Cities. This paper can be viewed at http://www.policylink.org/ToBeStrongAgain.pdf