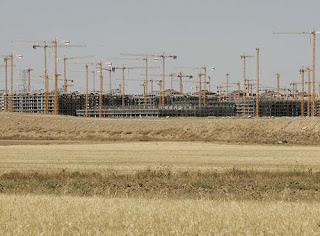 From the end of last century until 2008 Spain was the fastest growing economy in the European Union. Today Spain is the slowest member country in recovering from the global financial crisis and has the highest unemployment rate in the continent (growing close to 20%). These two situations have a very clear cause-effect relationship and represent the typical result of a real estate bubble. During the years before the crisis 20% of Spain’s GDP growth was led by the construction industry. The inflation in the real estate market in 6 years was 131%. Governments and businesses justified that this growth was not a dangerous bubble arguing that its contributing factors were essentially demographic and financial (housing needs of the baby boom generation, immigration, extremely low interest rates). What they did not want to see was the speculative nature of such one fifth of our economy. And they did not want to see it because the business was grossly profitable.

The reason behind all this, though, is linked to a wrongly designed decentralization. Spain is well known in Europe for being the most decentralized country. The decentralization model is based on transferring competencies to the middle government level, what we call the Autonomous Communities (something like the States in the US). The problem resides in that the decentralization to Municipalities remains as low as in developing countries. Indeed, if one of the most important signs of advancement in human development is democracy, then it is at the municipal level, where governments are closest to citizens, where democracy impacts most on human development and where there should be a larger part of the public resources.

During the years of high growth and speculative happiness, Spain’s municipalities had extremely little resources from general taxing systems (income, VAT, etc). They had to rely on taxing real estate and construction taking place within their jurisdictions. So, in order to keep their constituencies happy (as well as politicians' pockets) with infrastructure and service investments, municipal governments relaxed all rules and monitoring (social, environmental) and strongly promoted businesses to invest in urbanizing their territories. The favorable conditions given by banks and geographic trends helped this formula generate a snowball effect on all Spain’s economy. And it crashed hard. The 20% construction contribution to growth has become 20% unemployment. This is something that the rest of European fellows have prevented by establishing a real democratic and beneficial decentralized system.