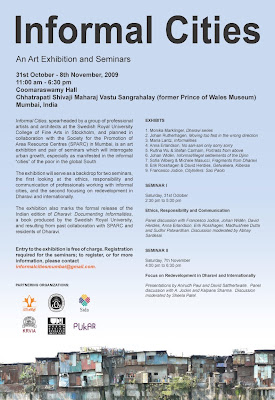 SPARC, the Mumbai-based NGO I used to work for, and the Swedish Royal University College of Fine Arts in Stockholm are organizing "INFORMAL CITIES," an art exhibition and seminars to be held in Mumbai. The exhibition will be on display at the former Prince of Wales Museum from October 31 to November 8, with seminars on opening day and November 7.

One seminar will reflect on the redevelopment of Dharavi, a vast, mostly informal township in central Mumbai that has been the subject of a major government urban renewal project since 2004. SPARC has worked with urban poor federations and women's collectives in the area for almost 25 years and has been a leading advocate for making the plan more responsive to residents' needs. The Royal University College, in partnership with SPARC, sent multidisciplinary teams to Mumbai to complete an open-ended "documentation" of Dharavi. They produced a book called Dharavi: Documenting Informalities; an Indian version will be launched at the event.

The second seminar considers the "ethics, responsibility and communication of professionals working with informal cities." I have not often seen this type of self-reflexivity as a major topic of public discussion - an important and under-emphasized aspect of "participation."

The event is a counterpart to a symposium of the same name, which brought leaders of urban poor federations, civil society representatives and urban professionals from around the world to Stockholm in September 2008.

To register for seminars or for more information, write to informalcitiesmumbai@gmail.com.