Recent developments in Kibera and Dharavi, two of the most high-profile slums in the world, underscore the importance of including informal workers in planning decisions. In Kibera, a UN-backed slum clearance is underway amidst protest from residents whose livelihoods are at risk (and landlords who control informal real estate). The redevelopment plan for Dharavi has been stalled due to upcoming elections, as politicians appear reluctant to alienate the millions of voters involved in the economy it would displace. Slum redevelopment often exacerbates poverty when informal workers are not involved in decision-making processes.

Living conditions in slums can be improved without uprooting local economies. An international research network called WIEGO has been addressing occupational health and safety (OHS) in the informal sector. Through this initiative, researchers find out which government agencies are in charge of OHS and help informal workers open channels for dialog in policy development. WIEGO makes sure they have the resources for effective advocacy. OHS researchers also compile best-practices among government programs that have established successful workplace standards in informal settlements. 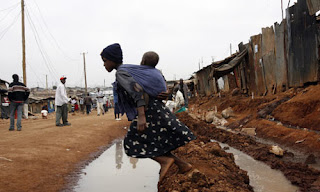 WIEGO is part of the Inclusive Cities Project, which promotes the representation of informal workers in planning decisions. They work with membership-based organizations in slums to influence municipal policy. Informal businesses are considered essential to poverty reduction, especially when accompanied with adequate infrastructure, regulation, and stimulus. If these businesses were included under effective legal structures, worker exploitation could be monitored and tax revenues used to finance improved living conditions.

Elinor Ostrom, Basudeb Guha-Khasnobis, and Ravi Kanbur have recently published a book titled Linking the Formal and Informal Economy: Concepts and Policies. It includes theoretical and empirical studies that identify close relationships between the two sectors. Understanding informal business as an integral part of a city's economy could encourage legal representation, protection, and accountability. In addition, Ostrom's research on commons, institutions, social capital, and human-environment interaction is very relevant to planning and development from within informal settlements.

Communities like Kibera and Dharavi have complex and active economies that can be included in legal governance. It's essential for informal workers to have a way of protecting their rights and livelihoods.

Credits: Photo of a boy in Dharavi, by Jonas Bendiksen. Photo of Kibera residents, from the Guardian.