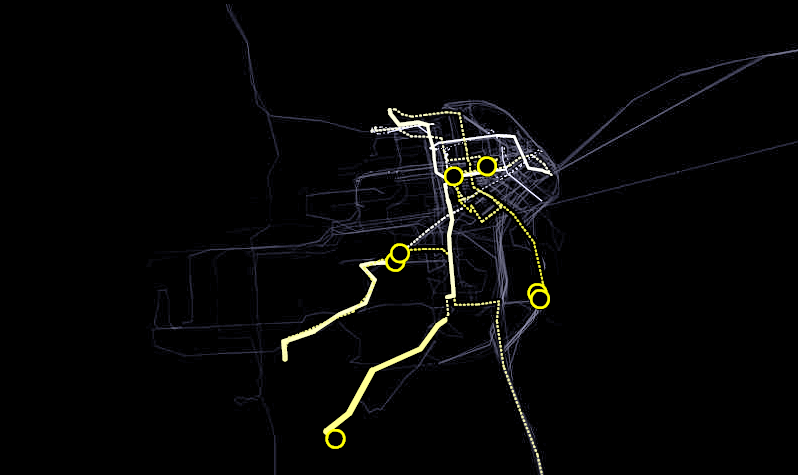 Porteño author Jorge Luis Borges tells of an Empire whose insatiable cartographers produce a map of their territory at the scale of 1 mile=1 mile. (Spanish audio and English translation). Of course, the map is useless once it is realized and abandoned (although relics are said to remain in the deserts, where presumably they have not yet been trodden under). We are reminded of the futility of things thorough, or conversely, of the necessity of abstraction. Map-making, we know, is a delicate and political art. But this was written in 1946 and we live in the Google Earth world; Borges' paradox of the map to its territory seems a quaint concern now. Who frets over spherical projections (Mercator or interrupted Sinusoidal??) when we can pan over the globe so effortlessly?

And so the map has fragmented, not into futility, like Borges’s parchment, but into endless varietal mash-ups depicting physical and phenomenal worlds.

These maps rely on centrally produced data. Surveys are commissioned; satellites are launched; maps are digitized; censuses are taken. And with luck, this information is freely distributed. In the last months, New York and San Francisco have started websites to increase public access to their datasets and have each launched competitions for the development of “applications” that deliver this data to the larger public. (See Katia’s first post which featured a fine map of crime events in San Francisco made from this data.) But many of these datasets are made once, or at best periodically, so some of the maps will be out-dated by the time they are visualized. Datasets that are constantly updated, like FAA flight info, or police blotters, are often filtered by the conventions and restrictions of the organization producing them. The flood of newly available data might be free, but it is not necessarily accurate or unbiased.

As greater numbers of us carry GPS-enabled mobile devices, the possibility of automatically generated datasets is emerging. Sites like CabSpotting.org utilize the GPS units in taxis to produce a real-time map of their position and velocity--and by extension--a road-map, a traffic map, and a map of points of interest. Trendsmap.com geo-references recurring phrases in twitter posts and reveals a real-time heat map of local interests (which seem to oscillate between celebrity gossip and the latest sports stats):

Christian Nold has been producing “emotion maps” of various cities by combining GPS traces with a user’s “skin conductance” a proxy measurement for emotional arousal. Spaces of excitability and dullness, zones of contestation, and unsafe places are captured: 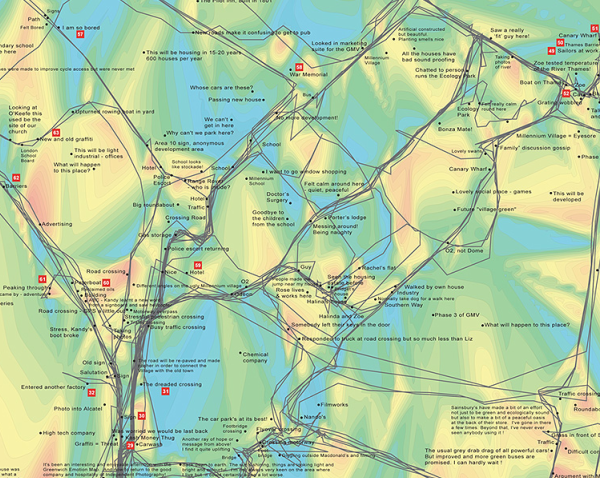 Instantaneous mapping can also feed back into existing maps to verify them and extend them. At OpenStreetMap.org, routes or “traces” recorded with gps units are uploaded by users to augment the base map provided: GPS artist Jeremy Wood has explored methods of recording “accessibility” and desire lines in open spaces by recording the position of his body (or of his dog) over time. A park map emerges below as the author and volunteers wander through an open space for a day: 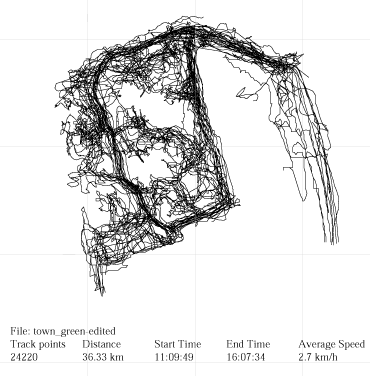 These automatically crafted maps are anonymous and — except for the GPS satellites that record location — their production is decentralized. The inherent repetition means the data collected is “blurry,” but structure nonetheless emerges. Where traditional maps focus on boundaries and naming, automatic maps depict densities and transitions — showing us the potential of a thing instead of its intended use. An official online map of London might show seven types of “roads” in the city, from Motorway to Footpath. An automatic map of the city would show every concrete, asphalt, wood, or cobble surface braided together as a single but fine-grained mesh of movement, its strands tapered like streams. Use would be recorded, not predicted. A residential street being used as a throughway would be clearly visible. Sidewalks that are seldom walked would be conspicuously wispy strands pointing to more useful concrete. (And thus good candidates for the jackhammer …).

While most of the links I listed above fall in the category of art projects, I think the potential is abundant. As GPS devices are incorporated into phones, the data to be combined with one’s geo-position expands. Words, barcodes, body temperature, photos, searches can be cataloged in space. Moods could be tracked, but so might epidemics.

So let’s mine datasets and make datasets. Plug-in if you can.

(The black and yellow map at the top is from cabspotting.org. The images in body of this post are from the websites that are hyperlinked in the sentence preceding them. The map of London is a multi-year overlay of Jeremy Wood’s movement around his city, found here. I haven’t been endorsed by Apple.)