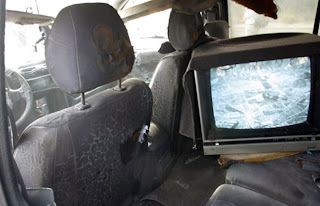 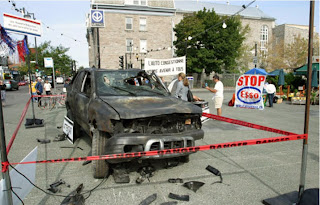 Connecting the topic of social change in cities into two of this month’s posts on Public Art and Montreal, one of my favourite cities, a provacative organisation named ATSA came to mind. I first came across l’Action Terroriste Socialement Acceptable sometime in 2003, walking along Avenue Mont Royal towards the Metro and stumbling across a burnt out (and still smoking) SUV with a TV inside blaring black and white static. This art intervention called Attack, since repeated in cities across Canada, is an action incriminating the automobile industry, rampant consumerism and governments, seeking to grab passers-by from their daily worlds and usher them towards a fiction which contains strange hints of reality, pressing people to reflect on the perverse effect of petrol-guzzling, power-hungry vehicles. In a more recent Attack event, a Citizen’s Statement of Offence has been created, a flyer that looks like a traffic violation form but instead has environmental demerit points, available for anyone to print, fill in and place on the windscreens of high fuel consumption vehicles, to raise awareness and to use as a tool to engage in dialogue. 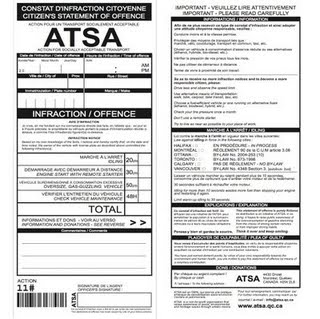 Founded by artists Pierre Allard and Annie Roy, ATSA creates urban installations, performances and realistic stagings that highlight the various social and environmental aberrations preoccupying them. Since 1997 their works have sought to investigate and transform the urban landscape and restore the citizen’s place in the public realm, employing it – I would say rightfully and as it is meant to be used – as a political space open to discussion and societal debates. ATSA promotes an open, active and responsible vision of artists as citizens contributing to the sustainable development of their society.

Dozens more actions have taken place in Montreal and beyond; my top three favourites that I’ve been able to interact with include 500 Billion, FRAG on the Main and State of Emergency. 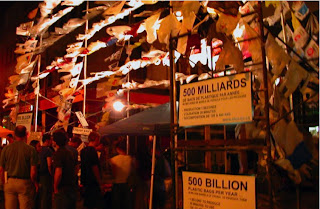 500 Billion was set up as a stand during the Saint-Laurent sidewalk sale in 2005 displaying dozens upon dozens of colourful plastic bags cavorting in the breeze, highlighting society’s rampant consumption of these objects and their impact : it takes 60 million barrels of petroleum and one second to produce them, they are used on average 20 minutes and take between 100-400 years to decompose. 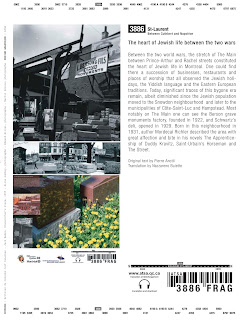 The second, FRAG on the Main, is a journey through fragments piecing together the historic Boulevard Saint-Laurent through audio and graphic installations on 32 spots, connecting the existing city space to its cultural and social past. As the dividing line between east and west Montreal, an historically significant hub for the garment industry with important Jewish, Portuguese and Italian communities, Boulevard Saint-Laurent is a fascinating piece of the city. These installations provide a fantastic historical link which is especially critical as the past disappears, as the Boulevard becomes more and more gentrified. 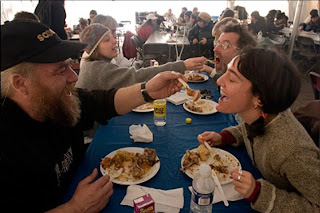 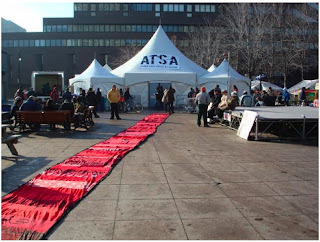 Finally, perhaps my favourite ATSA action, running now for over ten years, is l’État d’Urgence, State of Emergency, an annual five-day urban refugee camp in November in downtown Montreal. The event seeks to connect the reality of the city’s homeless communities to regular Montrealers, with music, dance, cinema, spoken word, circus, story telling, workshops, art, night time sleeping quarters, a 24-hour snack table, free warm clothes and three free delicious meals a day for 150 people, the latter donated by a different local restaurants each day. Dubbed by the artists as a mani-festival – a protest festival – the event seeks to broaden peoples’ visions, to confront and challenge social exclusion head on, bringing together the reality of homelessness with art to educate the public about the reality of life on the streets. Last year’s 10th anniversary coincided with the 60th anniversary of the Universal Declaration of Human Rights; l’État d’Urgence’s insurgent art tactics sought to highlight how far there is to go towards meeting these ideals. Roy and Allard, the artists behind ATSA’s actions, aim for this event to be a call to action. 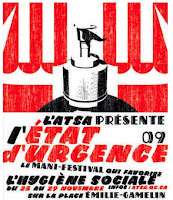 Information on this year’s event, taking place from 25-29 November, will be available on ATSA’s website as of 10 November. If you want to learn more about l’État d’Urgence, check this 8 minute audio piece the National Film Board’s Citizenshift made on last year’s event.

For me, ATSA’s work is a great example of the kind of public art we need in cities: reflective, politicised and challenging the viewer to question and change their social and cultural norms. Moving beyond the public space, where art takes action.