Edible Roofs: You Are What You Eat 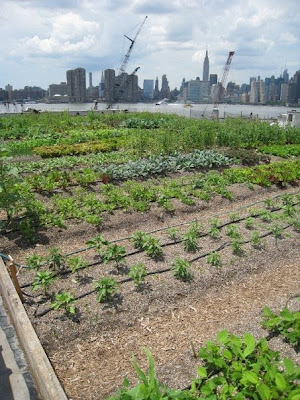 Urban agriculture, something that many of us question whether feasible or actually sustainable, and perhaps right off as fad, is becoming a reality in New York City. The first commercial rooftop farm has taken root over a defunct bagel factory in Greenpoint, Brooklyn, more than appropriately titled “Rooftop Farms," it is 6,000 square feet of agriculture tended by Ben Flanner and Annie Novak. This heralds an array of other projects currently under construction or in their first planting season in New York.

To create Rooftop Farms, 200,000 pounds of lightweight shale to serve as soil was hauled onto the roof once its load bearing capacity had been calculated. The result is 16, four foot wide beds that grow dill, heirloom tomatoes, cucumbers and leafy lettuce. The $60,000 cost ($10/sqf) was covered by the film production company, Broadway Stages that owns the building. The project can be seen as having many benefits like creating a porous, green roof surface that can harness rain water and help with New York’s sewage-overflow problem. For the owners it is a profitable model that means creating higher quality produce that travels a shorter distance to the table and in New York City which imports 1 billion dollars of vegetables every year. If you are in the New York area this Sunday, October 25th, Rooftop Farms is having a straight from the farm Farmers Market. 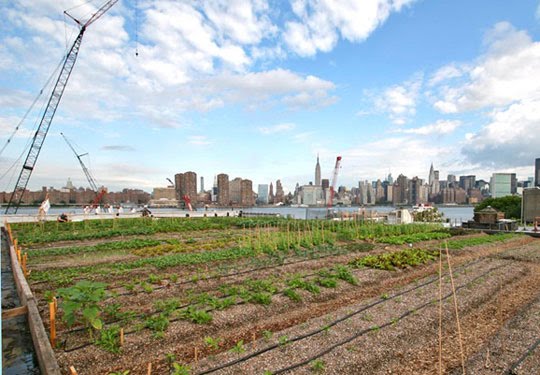 Another large project is Gotham Greens, a 12,000 square-foot hydroponic, greenhouse system on a church’s rooftop in Jamaica, Queens, New York. It will be completely water based, with a system for capturing rainwater for irrigation and will be powered by 2,000 square feet of solar panels on a neighboring buildings roof. The project is projected to produce 30 tons of fruits and vegetables per year but Gotham Greens has a much larger vision as well that hopes to construct over 100,000 square feet of hydroponic farms throughout the five boroughs by 2030. A large percentage of the produce will be sold at Whole Foods that has already signed a contract, but 4.5 tons will go to local farmers markets as part of a local initiative for higher quality food.

According to New York Sun Works, if all the 14,000 acres of New York City’s unshaded roofs were covered with hydroponic farms, over 20 million people could be fed. The city in the future may actually feed itself, but what does this mean for the transformation of space in the city, going beyond a grounding in profit gain and reforming these newly inhabited layers in the city.