Conference to Explore Nationalism in Cities 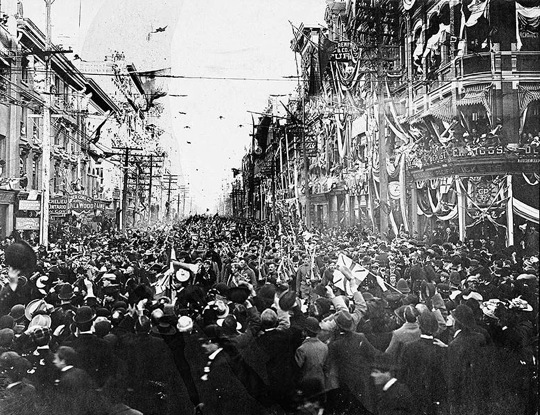 I'm involved with a project at the University of Cambridge that takes as its focus the intersect between nationalism and the city. As the deadline for a paper proposals nears, my co-organizer Chris Moffat and I thought we would offer a brief introduction to the theme for Polis readers:

As urbanists, we regularly claim that "the city" breathes life into those within it. Yet this relationship is twofold: ‘the city’ would be nothing without the breath and imagination of its own people.

An interesting problem emerges here: How are we to understand the role of space and place in the history of ideas? Can we conceive of an intellectual history written spatially? Ideas move, that is certain. They can ricochet off certain surfaces and be absorbed by others, transformed by integration or emboldened by rejection. But can certain ideas have specific relationships with certain types of spatial environments?

An upcoming conference at the University of Cambridge hopes to find an entry point to these questions by narrowing the parameters, navigating towards the city. What, it asks, is the role of urban space in the history of nationalism as an idea? How does the city relate to the constitution of national identity as a discourse?

The apparently ambivalent relationship between nationalism and the city offers an opportunity to think about the ways space can affect the origins, dissemination, perpetuation and undermining of ideas. Homogenizing nationalist narratives seem to leave little room for the chaotic reality of the city, but the two share intersecting imaginaries and have inspired multi-layered identities. It was through cities that early ideas of the nation were traded, and it is in cities that national identities have been pushed to their breaking points. The urban has helped to shape the national, and this relationship also works in reverse: cities can be sites for national consolidation and commemoration, but also facilitate the emergence of spaces of alterity and zones of conflict.

The February 2012 conference, hosted in Cambridge by the Centre for Research in the Arts, Social Sciences and Humanities (CRASSH), is designed to "re-center" the urban in theories of nations and nationalism and is currently inviting paper proposals from across the spectrum of academic, professional and informal interests. Over the next few months, Polis will follow the conference's development through a series of posts; readers are encouraged to participate in this conversation on the role of cities in nationalism's pasts, presents and futures.

The fast approaching deadline for paper proposals is Oct. 1, 2011. Details on submission can be found on the conference website.