The Price of Solitude in Brooklyn 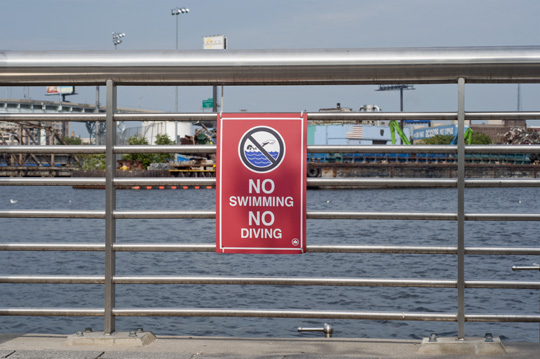 In the September edition of 7STOPS magazine, Benjamin Korman took a look at the Newtown Creek Nature Walk in Greenpoint, Brooklyn. What he found was an homage to industry, tucked between a sewage treatment plant and creek so polluted that signs warned against kayaking. What Korman evokes in his description is not one of nature — there's about as much nature here as in your average collection of potted plants — but of foul smells and poor scenery. This is where I stop agreeing with him: He considers this a drawback, and I think it's a feature.

In a city with more than 27,000 people for every square mile, room is scarce. The complaint that New York City is turning into a city for the rich is a valid one, but there is no denying that space has to be distributed in some fashion. Aside from some prominent exceptions, such as mandated low-income units, the preferred method of distribution is raising prices to reach equilibrium with demand. Usually, this price is in dollars or the price of sharing a park lawn with a thousand neighbors. With the Newtown Creek Nature Walk, the location and the smell are the price you pay.

Korman's right: The location is undesirable. Your choice of vistas is a construction site to the west, a highway to the north and the sewage treatment plant to the east and south. He's right about the smell, too, though anyone who has lived in a fishing community will come away wondering what the big deal is. But for these reasons, I have yet to see more than three people there at any time. Contrast this with the High Line or McCarren Park, where the only time you'll see just three people is at 3 a.m. or in the middle of the winter.

Am I going to take a date or a game of chess to the nature walk? No, though I should mention that I've witnessed the latter. Will I take refuge there when one of my four roommates has plugged in his amp, and I've had a long week of work? Of course, and the smell is a fair price to pay.

Dustin Coates is the founder of 7STOPS, an online magazine that focuses on one topic a month from seven different perspectives. A Texan from childhood, he now calls Greenpoint home.