Reclaiming the River: Waterfire in Providence 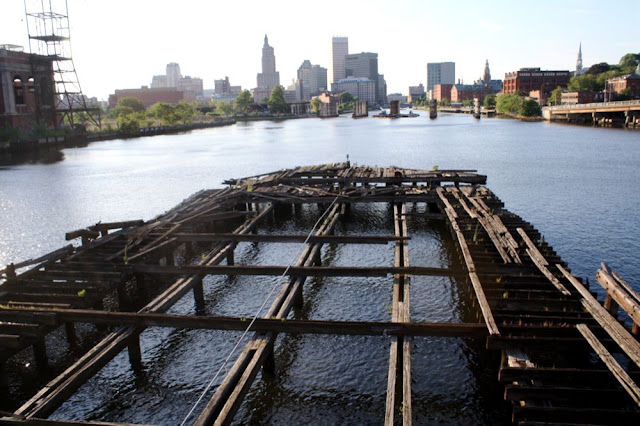 View of Providence from the Point Street Bridge, at the mouth of the Providence River.

It’s a Saturday night in July, and something is happening in Providence.

Providence, RI, has never been on the world map. Although the capital city of America’s smallest state commanded considerable respect as a trading port before the war of independence and as an industrial center afterward, most Americans can only vaguely place it on the East Coast: “Oh, Providence — that's near Boston, right?” 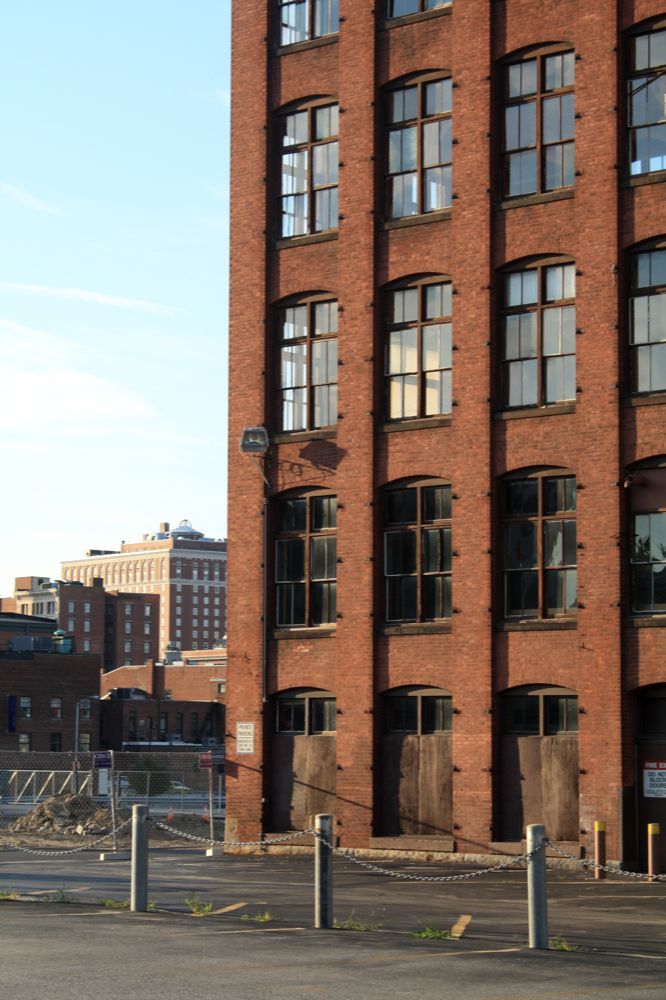 Like so many American industrial centers, Providence began to decline in the 1930s, and by 1970 was only a crumbling, rusty echo of the thriving city it had once been. Today red brick factories and warehouses still dominate most of the city landscape, but the intricate marble-and-granite facades built in Providence’s heyday now hide gutted interiors or converted college dorms as often as businesses and banks.

But tonight the downtown district, usually a sinkhole between two commercial strips on College Hill (Thayer Street) and Federal Hill (Atwells Avenue), looks suspiciously busy. Car locks beep and free parking spaces are few and far between, even in a city with plenty of empty lots. Nearly every cafe or food vendor in the city has put out sidewalk seating — and all of the tables are taken. Instead of entering the massive Providence Place Mall, one of the state's biggest attractions, pedestrians are turning their backs on window displays and descending the steps to the river. 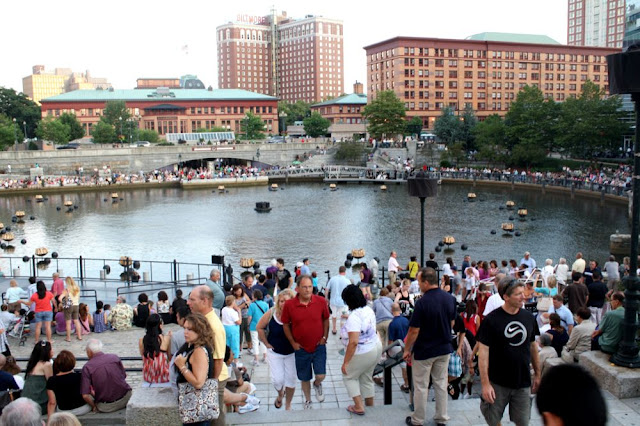 The crowds gather at Waterplace.

It’s not a concert (no venue in the city could hold such a crowd). It’s not a sporting event (Providence isn’t large or wealthy enough to have its own major league team). It’s not even a holiday, just an average, balmy Saturday night in July. It’s Waterfire. More specifically, it’s a few dozen metal baskets anchored in the narrow Providence River, filled with wood and set ablaze — plus a bit of recorded music.

On its own, Waterfire is not that impressive. The flames do glitter enchantingly on the dark water, but most tourists get tired of watching after about five minutes. But the wet-hot gimmick is the key ingredient for a savory Providence stone soup, stewed once every two weeks for the benefit of the entire city.

Waterfire began when a local non-profit commissioned artist Baranaby Evans to create an installation for an alternative New Year’s celebration in 1994. Evans re-created it in 1996 for the International Sculpture Conference, and his colleagues convinced him to keep the fires burning. Soon, food vendors began to set up stalls to catch the pedestrians that wandered down to watch the flames. Street performers cavorted on bridges, and local artists sold homemade jewelry from mats on the steps of Waterplace, a concrete basin built around a river bend. Rhode Island law conveniently allows alcohol consumption from open containers on Friday and Saturday nights, so restaurants and bars began selling beers from tubs on the sidewalk. And because the subtle fire is a natural draw for lovers, flower sellers and other entrepreneurs soon began to peddle romantic products. 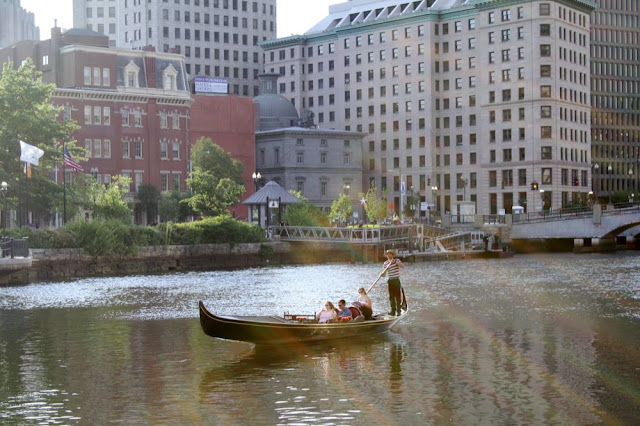 To meet demand, Evans added more braziers and recruited volunteers to dress in swanky black and regularly feed the fires. Now they burn ten times a summer, from May to October, and each event is co-sponsored by a different set of Rhode Island businesses, who make their own profit by serving fancy liquor and gourmet buffet dinners in fenced-off tents.

Ironically, twenty years ago Providence had practically no river. The waterway has always been narrow, perhaps more aptly described as a small inlet of the Narragansett Bay than a proper river in itself, and it has always been clogged with piers, boats and factory extensions. What’s more, industrious Rhode Islanders built so many spans over the centuries that eventually several became one, and in 1988 Providence earned its first and only reference in the Guinness Book of World Records, for the world’s widest bridge. 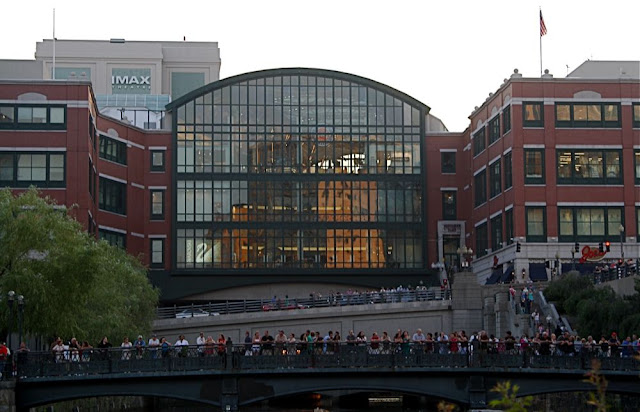 Waiting for the fires to be lit in front of Providence Place Mall.

The city tore down the widest bridge in the early 1990s as part of a waterfront renewal project and uncovered a stinking, tepid sewer. They planted trees and built a “Riverwalk” to encourage new commercial development, but most sensible residents chose to admire their reclaimed water body from a safe distance. It was a nuisance, an environmental disaster, a quaint New England quirk, but not something worth noticing, until Evans decided to light it on fire. 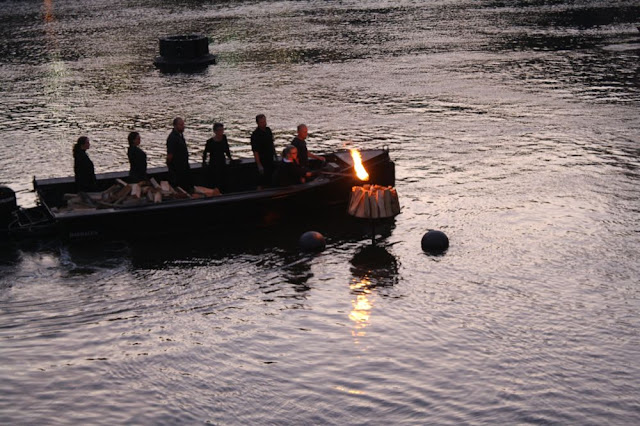 Now restaurants line the waterfront, particularly Waterplace, the commonly acknowledged center of the Saturday night festivities. While much of the real estate along the river is firmly held by the Rhode Island School of Design or Providence Place Mall, in 2000 an ambitious developer invested millions in mod high-rise apartments that tower over the river. (He was perhaps too ambitious for Providence’s real estate market; rumor has it that the apartments took several painful years to lease.) And although the exact economic benefit of Waterfire can never be estimated, the event attracts between 10,000 and 30,000 spectators every lighting, most of whom come with wallets full of discretionary income.

Waterfire stands as a shining beacon for the hundreds of cities striving to reclaim, renew and refresh their rivers. Evans has created similar installations in Columbus, Ohio and in Kansas City, Mo., and is exploring opportunities in St. Petersburg, Barcelona, Seoul, Hiroshima, Rome, Padua and Venice. Unfortunately, the installations in Columbus and Kansas City have shown that Waterfire is not a formula that can be replicated everywhere. Perhaps Providence’s narrow river, many bridges and relatively open waterfront make it particularly suited to pedestrians. Perhaps there is an unusually strong desire for outdoor events in Rhode Island. Or perhaps the stone soup is magic after all. As a Providence resident, I’m just glad it works.