One of my favorite exhibition spaces that often features shows related to urbanism is Storefront for Art and Architecture in New York. On view at the moment is "Sacred Spaces in Profane Buildings" by Italian artist and architect Matilde Cassani (b. 1980). Cassani is a Ph.D. candidate who currently teaches at the Politecnico di Milano and is developing a project on "holy urbanism" at the Nuova Accademia di Belle Arti (NABA) .

Cassani’s exhibit at Storefront explores the secret sacred territory throughout New York. The photographs unveil the many ways in which religion manifests itself in non-traditional spaces in the contemporary city.

As part of the exhibition, Storefront and Cassani are also developing a New York archive of sacred spaces in profane buildings and are calling for submissions from the public. These can be memories of a visit, a sketch of a known space, a photograph of a street sign or a location on a map. The aim is to construct a comprehensive guide to the sacred unknown of New York.

The exhibition will transform Storefront's facade into a golden wall framing three spaces for reflection: 1) a reading room connected to the archive; 2) a presentation of four mobile, foldable structures designed by the curator based on her research into objects associated with rituals performed in temples and unofficial prayer rooms; 3) a presentation of a collection of symbolic objects donated by different religious communities in New York.

The age of majestic churches, glimmering synagogues and grandiose mosques may be gone, their remnants sometimes turned into museums, theaters or shopping malls. But the need for quiet spaces for contemplation in the bustling city seems to remain. These are no longer visible architectural manifestations but are retrofitted, hidden away, sometimes only identifiable by their users.

Does this mean that religion in the city has left the political and public sphere and turned into a private question? Probably not. Cassani’s image of the mosque in the community center at 51 Park Place reminds me of the political turbulence I experienced last year living in New York, sparked by the fact that the mosque was to be located near the the World Trade Center site. Although it was hidden behind a profane facade, it provoked public debate. But it’s there today — a symbol of the tolerance large cities often create. 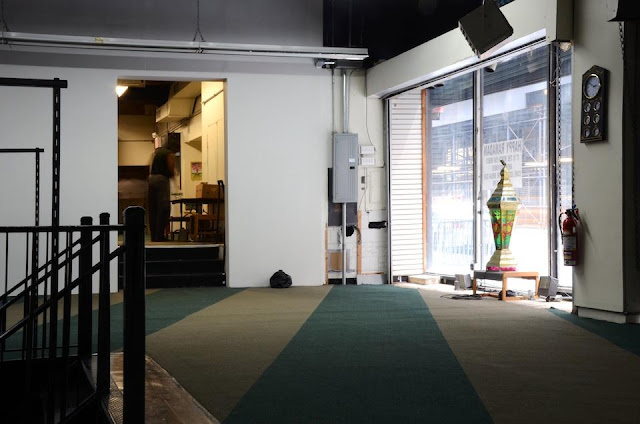 The exhibition will run from Sept. 14 to Nov. 5 at Storefront for Art and Architecture. A series of closing talks, lectures and debates will take place on Nov. 5 from 1 p.m. to 7 p.m.