Hong Kong, dense and vertical, isn't known for its street trees. But it has something most cities don't: wall trees. These trees, usually Figs (Ficus microcarpa), are found clinging to the masonry retaining walls built in the 19th and early 20th centuries, as the city carved its neighborhoods into the steep green hillsides overlooking Victoria Harbor. The trees, having found purchase on the wall via a digesting bird, ultimately root in the fissures and cracks in these walls, some developing into specimens of impressive size and Michelangelo-like form. 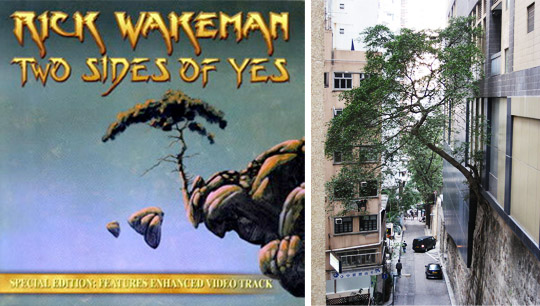 If Michelangelo did the roots, Roger Dean (artist of the trippiest Yes album covers from the 1970s and 1980s) was certainly responsible for some of the compositions.

These trees are habitats for urban wildlife. They contribute shade where it is often lacking. They filter the hazy air and take a few decibels off the constant din of traffic and construction. They even add stability to the walls, as their fine roots enmesh the structure with the soil and bedrock behind it. Beautiful and functional, the trees are an important urban phenomenon that the city is beginning to appreciate and protect.