For the urbanist, comparing the 1982 film "Blade Runner" and its progenitor, the literary classic "Do Androids Dream of Electric Sheep," is as rich and startling as it would be for any science fiction enthusiast — especially with respect to its choice of urban setting. While the novelist Phillip K. Dick imagined the protagonist Rick Deckard roaming (or more accurately, hovercraft-flying) the "kipple-ized," isolated urban degradation of post-fallout San Francisco, director Ridley Scott chose Los Angeles as the setting for this dystopian narrative, dark and buzzing with neon and people.

Scott may have found a post-human setting more easily conceived by mashing up LA's infamous sprawl with visions of vertical buildup; the hilly ebullience of modern-day San Francisco, with its Victorians and Edwardians, would need convincing visual translation into entropy on screen. The landmarks to which Dick anchors the book — the Mission Police Station, the San Francisco Opera House, a fictional pet hospital on Van Ness Street — dissolve into generic cityscape ephemera in the film, save the use of the Bradbury Building, a historical architectural landmark in downtown LA. 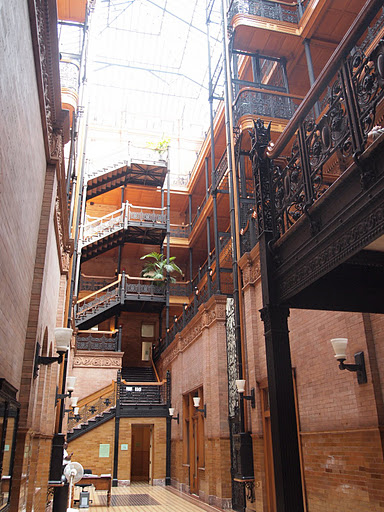 The city — and its associated notions of chaos, crime, daily antagonism and almost subhuman compact living — are often integral to the dystopian science fiction narrative as purveyor of character and place. At the same time, in contemporary reality, the city is also the vibrant setting for the collision of ideas and creativity, a symbol of modernity and economic opportunity. Perhaps the act of constantly re-imagining and revitalizing our urban environments — through architecture, urban planning, enterprise and a vocal and vital grassroots — will be crucial to keeping dystopian realities at bay.