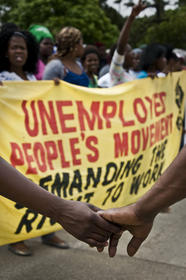 This Saturday, students and unemployed people will march into Grahamstown, a city in South Africa's Eastern Cape Province, and set up camp in a square near its main cathedral. The protest, "Occupy Grahamstown," is being organized by the Unemployed People's Movement and Students for Social Justice.

The Unemployed People's Movement has led protests in Grahamstown before; just last April, the grassroots group marched to demand sanitation, electricity and housing. But this time is different. Inspired by protests around the world, they clearly see their local struggle as part of a "global rebellion."

"As a movement of the poor we have taken great inspiration from the rebellion that has spread from Tahrir Square in Cairo to Syntagma Square in Athens, the Puerta del Sol in Madrid and now Liberty Plaza in New York," the group wrote in its press statement.

In "The Right to the City" (2008), David Harvey argues that in order for movements to effectively claim the right to shape cities and resist dispossession these days, they must converge in "a global struggle, predominantly with finance capital, for that is the scale at which urbanization processes now work." At the time when Harvey was writing, at the heart of the U.S. foreclosure crisis and beginning of worldwide recession, he noted that "we have yet … to see a coherent opposition to these developments in the twenty-first century." However, he saw "signs of rebellion everywhere" and realized that "any of these revolts could become contagious." Three years later, his prediction seems to be materializing.