A few weeks ago, I wrote about the Solar Decathlon, a competition among dozens of universities around the world to design and build the best energy-efficient house powered by the sun. While many designs were impressive, I questioned the level of affordability of the designs (the houses cost at least $250,000) and the practicality and livability of these homes in cities. These elements – practicality, livability, affordability and energy efficiency – are what make Via Verde so impressive and innovative.

Via Verde, as described on the project's website, represents a new model for affordable, green and healthy urban living. Since Via Verde won the New Housing New York Legacycompetition, sponsored by the New York City Department of Housing Preservation and Development and the American Institute of Architects New York Chapter in 2007, dozens of articles have heralded the mixed-use, mixed-income, affordable housing project as a major contribution to the South Bronx neighborhood, to the city and to the field of affordable housing design. Developed by Phipps Houses and Jonathan Rose Companies with Dattner Architects and Grimshaw, an impressive public-private partnership, the 71 cooperative homes targeting middle-income households and the 151 rental apartments targeting low-income households are being lotteried due to high demand. 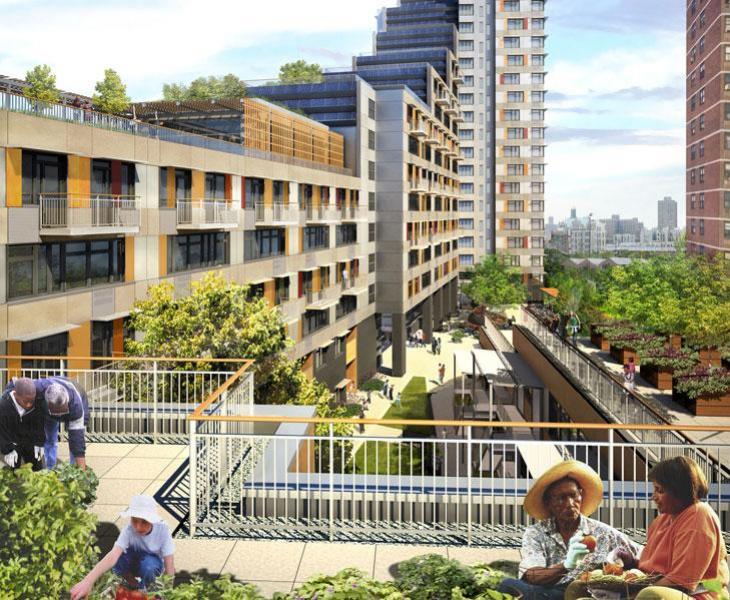 “Via Verde is Green Urban Living, re-imagined,” its website proclaims. Designed to achieve LEED Gold certification, the design includes a series of green roofs, gardens and a tree orchard to be used by the entire community of residents. The building grows from three-story townhouses to a 20-story tower at the north. Solar energy is generated by a 66 kW building-integrated photovoltaic system, rainwater harvesting and onsite cogeneration. (The design team was supplemented by Bright Power consultants.) More than 80 percent of construction and demolition waste was recycled, and 20 percent of building materials were locally manufactured. The website even recommends green cleaning products for consideration by the residents.

The building is designed not only with energy efficiency in mind, but also to help residents lead more healthy lives. Michael Kimmelman of the New York Times notes: “Asthma rates are high in the South Bronx, obesity commonplace, access to fruits and vegetables limited because supermarkets are, as always in poor neighborhoods, scarce.” Via Verde aims to address each of these, promoting exercise through well-lit stairwells and resident gardening, increasing access to fresh fruits and vegetables by building orchards and gardens, and promoting cleaner air and outdoor activity through the building design.

The design has another attribute often neglected in affordable housing projects: it looks good.

No one expects one housing project to change a neighborhood. A number of public housing have been built in this area of the South Bronx over the last 10 years, with varying degrees of architectural innovation and success. But as people begin moving in later this fall, anticipation is high for the building and its residents.

Credits: Photo from Via Verde NYC.