Emergence of Cities in Books

On a particularly foggy Friday evening in San Francisco (with nothing to do but putter about indoors), I sat down to watch a TEDx talk on the Ngram Viewer by Harvard University researchers Erez Lieberman Aiden and Jean-Baptiste Michel. Now under the auspices of Google Books, Ngram Viewer allows users to search for words in a database of five million books from across centuries.

While fiddling around with Ngram Viewer myself, I thought it would be interesting to look into the emergence of the word "cities" — and thus the emergence of the idea itself — in the canon of English books. Here's a snapshot of the results, juxtaposing a search for "cities," "pollution" and "industry" across Google Books' digitized repository of English books published from 1700 to 2000: 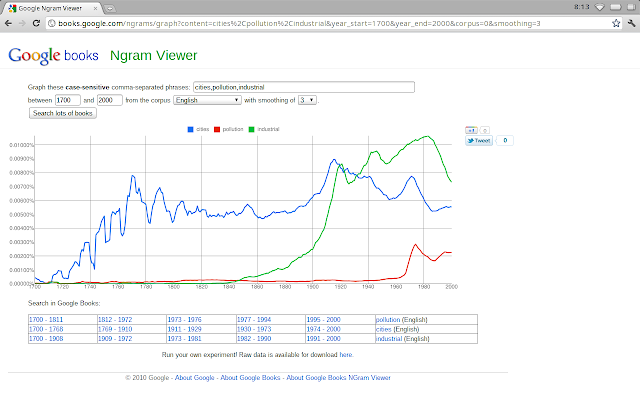 As it turns out, references to "cities" started showing up in the canon of English books in the early 1700s,  permeating rapidly until the beginning of the 1800s before plateauing. References to the term — and presumably its popularity as a topic of interest — picked up again between 1880 and 1920, and have since been in gradual decline. At the same time, we see a rapid increase in references to "industrial" from 1880 to 1920, with a precipitous decline from 1980 onwards (perhaps we have become inured to the concept). References to "pollution" spiked only from 1960 onwards, interestingly enough, coinciding with the publication of Jane Jacobs' "The Death and Life of Great American Cities" in 1961.

To put one's finger on the pulse of the human zeitgeist from 2000 onwards, a comprehensive scouring of books wouldn't be complete without a search through blogs, news and media on the Web. I suspect that references to "cities" aren't in sharp decline within the online corpus — if anything, the grand undertaking of global human migration, along with a proliferation of digital literature on its delights and discontents, has only just begun.