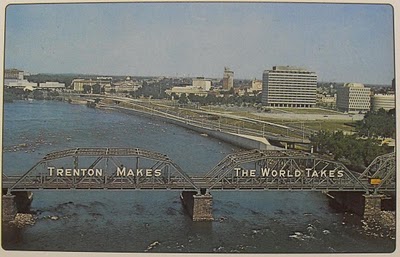 It is a story we’ve heard before: In the early 20th century, Trenton, N.J., was a booming, industrial city with an economy based on manufacturing. In the 1960s and 1970s, factories and industries began closing, and like many manufacturing cities along the steel belt, it has been in sharp decline for the last 40 years. Although the story of shrinking American cities is common, few have a slogan that so clearly describes their past and present.

Opened in 1806, the Lower Trenton Bridge was the first to span the Delaware River. The slogan, “Trenton Makes The World Takes” was first hung on the bridge in 1935, after being adopted as the city’s slogan in 1917, and is widely visible from the highway and train tracks that whiz commuters past Trenton, up and down the East Coast. In 1917, the slogan referenced Trenton’s leading manufacturing role; today, it emphasizes shrinking opportunities in the capital city, where the largest employer is the state of New Jersey and there are high rates of crime, unemployment and poverty.