Cars vs. Quality of Life in Quito

Quito, capital of Ecuador, is a city dominated by cars. Walking is not considered a means of transport, but an unavoidable problem between the car and the building you’re coming from or heading to. Cycling is simply too dangerous. Public transport is good only through the North-South trolleybus corridors, and it is a total mess if you’re moving along East-West directions. Moreover, as in most cities in the American continent, there is a vicious mix of real insecurity and an exaggerated collective paranoia about it, which prevents many from walking simply to get bread or the newspaper. In this situation, cars are seen by the great majority as THE means to moving in the city, and any other means is simply the result of not having a car. This product of “modernity” and “prosperity” is not just environmentally unsustainable, but it also undermines the quality of life of most citizens. 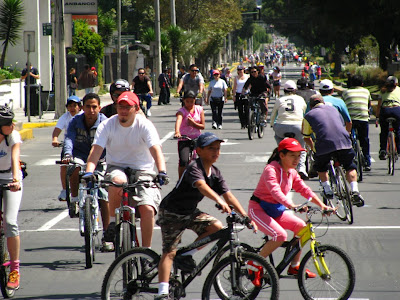 This ill situation might seem impossible to improve, however, the city is showing some indicators about positive change in the future. And they are quite amazing. Perhaps the most impressive one is the “Ciclopaseo”. It all started in 2003, when a local NGO (Biciacción), with the support from other international NGOs, organized a seminar-workshop on city cycling. This event convinced the city Mayor to close the main city artery (avenida Amazonas) to traffic on the following Sunday to be used only by bicycles. It started being once in a while for a few Km. Today it takes place every single Sunday on 30 Km, crossing the whole city from North to South, and with 40000 cyclists simultaneously. It really is a beautiful scene after having to swallow heavy fumes, being constantly intimidated as a pedestrian and standing so much noise during every previous 6 weekdays.

Credits: Image of a typical Sunday on Av. Amazonas in Quito from laciudadviva.org.