Whose city is this?
Corporate identity shapes the skyline; commercial products line the streets.
Faceless thousands surge through nameless spaces.
Whose place is this and how do we know?
Look to the ‘twilight zone of communication’.
The signs in the streets, the measures, the markings, the meanings,
the movement. (From S.J. Smith, 2000 in City A-Z by S. Pile and N. Thrift) 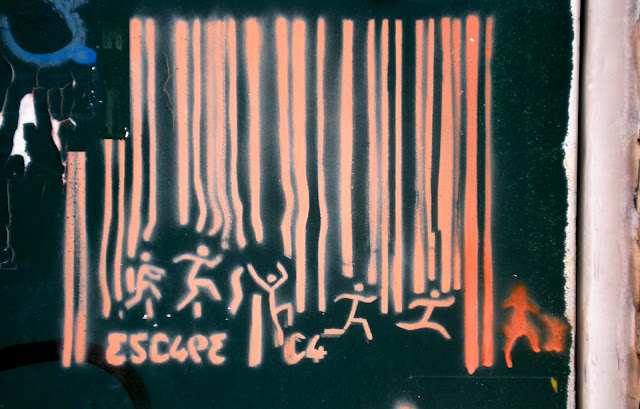 For many years, street art in cities across the world has fascinated me, specifically those clever pieces that provoke questions and reflections in the viewer, and/or challenge dominant social structures and norms. In my view, this street art humanises urban spaces through a manifestation of an alternative form of citizenship, expressing different and generally unheard concerns in a visual, tangible way. A passerby is thus exposed to a new, unexpected experience and feeling of the city. Furthermore, at a deeper level, I see street art as a visual and visceral manifestation of people questioning power relationships and imposed, dominant urban forms not only in the city but beyond, into regional and global processes that are increasingly interwoven in our day-to-day life experiences. 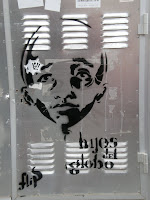 As most street art is considered an ‘unsanctioned’ activity by those who are ‘allowed’ to shape the city, the immediate question that arises is who decides these rules and ‘appropriate’ behaviours, and how is the boundary between what is allowable / not allowed defined – in other words, whose city is this? Whose place is this and how do we know?

Henri Lefebvre’s conceptualisation of the production of space highlighted the fact that every society produces its own space, a complex set of social constructions including meanings and values, what constitutes ‘right’ and ‘wrong’ behaviour. A hegemonic landscape is thus created in the urban fabric, expressing this constructed system of dominant, ‘appropriate’ meanings, meanings that are continuously contested and negotiated. At the same time, through processes of globalisation in recent decades leading to increased movement of capital and social and spatial fragmentation, these dominant urban meanings in cities across the world are more and more frequently emerging from a global scale, through a top-down, imposed process. Thus a space of flows is becoming the dominant spatial manifestation of power and function in society, as compared to historically rooted space of place, as characterised by Manuel Castells. Traditional urban spaces, in this conceptualisation, are thus disintegrating and in turn are being transformed into a global network of interconnected nodes.

While the transnational and hypermobile character and effects of capital that drives this process can instill powerlessness among local actors, street art can be 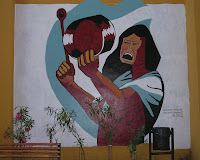 understood as an expression of marginalised (be it socially, economically, culturally, politically) individuals and groups reclaiming power over space, of reterritorialisation. In this way street art can be seen as a response and challenge to the space of flows, of the unequal effects of time-space compression: while spaces and objects of power and wealth are projected throughout the world through mass media and social norms, the reality is that only a fraction of the world’s population can access this experience. As most people’s lives are rooted in place, one of the reactions and contestations to this virtual and inaccessible reality find expression on walls, sidewalks, streets. The act of street art can be understood as an assertion of claims over space, reconnecting locally in place.

Street art can thus be seen as one of many activities in cities that challenges socially constructed ideas of what is ‘right’ and ‘appropriate’ in space and place, an expression of transgression of and resistance against normative boundaries and structures, against social-spatial rules and norms locally and globally. In this way it fundamentally questions who ‘owns’ the city and who participates in its shaping, in the creation of identity and belonging in the city.

However, at the same time that street art challenges the status quo, recent years have seen several street artists exhibiting their work in galleries, developing merchandising lines and selling pieces for significant sums. And deep contradictions emerge as, for example, the City of Montreal arrested and charged the stencil artist Roadsworth with 50+ counts of mischief in 2004, but then in 2008 provided him with a permit to undertake several pieces in the downtown area.

As street art is increasingly given economic and/or social value and status, is this in turn subverting the subversive, incorporating it into the status quo of which it is so critical? Will these alternative forms of expression become subsumed into the hegemonic landscape and if so, will such works retain their crucial role, in my opinion, of questioning structures and forms of power in the city and beyond? Such urban meanings and understandings will without a doubt, fortunately, continue to be contested and negotiated.