Urbanism in the Information Age 2.0: The CLOUD 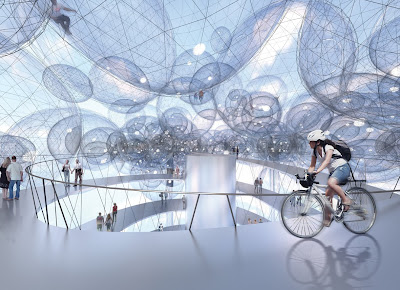 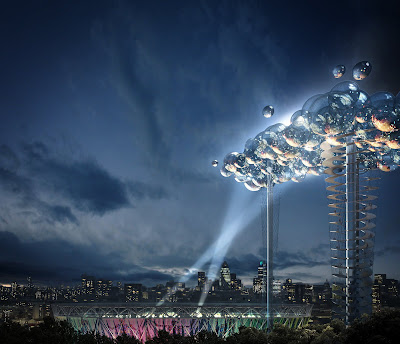 This post continues to explore the possibilities of digital technologies in shaping our cities by investigating a proposal for the London 2012 Olympics: The CLOUD. The Olympic Games provide one of very few opportunities for the real-world implementation of futuristic and highly creative proposals such as this. The proposal imagines the potential of digital technologies in its cross-disciplinary and global design methods, its funding, and its communication of information.

The CLOUD is an observation deck proposal for the 2012 games that draws on the expertise of prominent professionals and advisors from across the globe, such as Google, Arup, the MIT SENSEable City Lab, and Umberto Eco. The networked nature of such a collaboration in design and information exchange is something that builds upon the unique digital communications resources available in the 21st century. This project welcomes the idea of drawing on knowledge capital on a global scale for implementation in a place-specific project.

The funding of the CLOUD is to come from donations from anyone in the world, allowing a democratic participation in supporting the project, which will be scaled appropriately based on the achieved funding levels. In this way both the size of the final built structure and the amount of information broadcast on the surface of the bubbles depends upon the collective financial support received.

While the marketing behind this project, including its integrated use of digital processes and technologies, attempts to sell a seductive idea, it opens up a debate on the potential of the information age in urban projects. Could this network be utilised by less glamorous pursuits such as effectively scaling up housing solutions for the poor? If humanity came together in such a democratic and participatory way, facilitated by the technologies and approach of the CLOUD project, but focused on alternate problems, what solutions might we devise?

Credits: Images of the CLOUD project from online gallery.