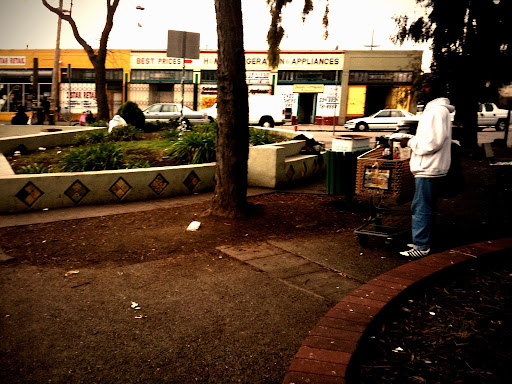 The intersection appears at the end of the video above.

San Pablo Avenue runs a straight course from Oakland in the south, to San Pablo in the north. If there is one street along which one can find the breadth of experiences and cultures of the East Bay, this would be it. Although it has had much more glamorous histories, the section of the street in Oakland is largely home to prostitutes, addicts, and their dealers. Garages and liquor stores are sprinkled between vacant lots and abandoned buildings. This particular intersection (more of a triangle, few streets actually cross San Pablo cleanly) has always interested me as a kind of bustling hub of illicit activity. Generous bus stop seating and low planters offer plenty of space to sprawl out for the day, so many do. I was clearly in someone else’s public space. But at the same time, some of the people I spoke with there conveyed a sense of raw vulnerability--that this public space was not wholly theirs either.