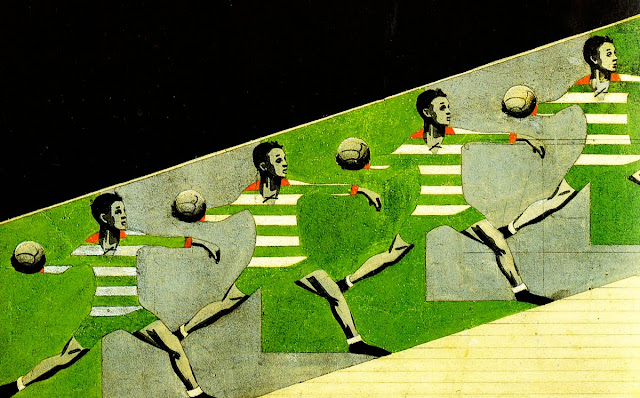 This is the third post in a series of brief visual studies on the history of public parks in Moscow. It addresses the period following the October Revolution, in 1917, to the early 1930s. 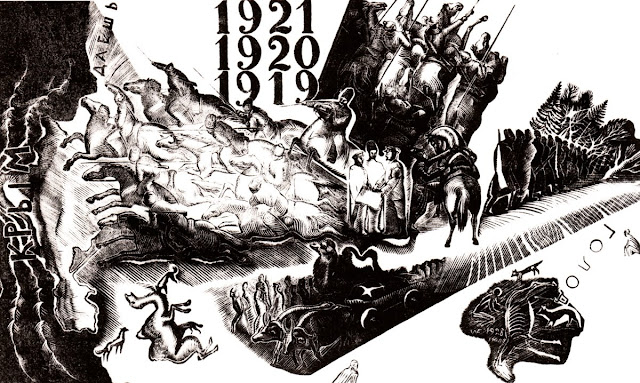 Wood engraving from the Revolutionary Years series by Vladimir Favorsky.

After the October Revolution, Russia was still embroiled in international and domestic conflict. Despite prompt withdrawal from World War I, insurrections among the former ruling class (White Army), peasants (Green movements), anarchists (Black movements), and other factions threatened the survival of the Bolshevik state. Lack of stability and resources made it nearly impossible to proceed with new urban development. However, the revolution ushered in a rush of ideas on city planning in the new socialist era. The government sought to reinvent society in accordance with Marxist principles, including communal ownership of resources, universal education, income and gender equality, an end to global imperialism, and the unification of town and country. 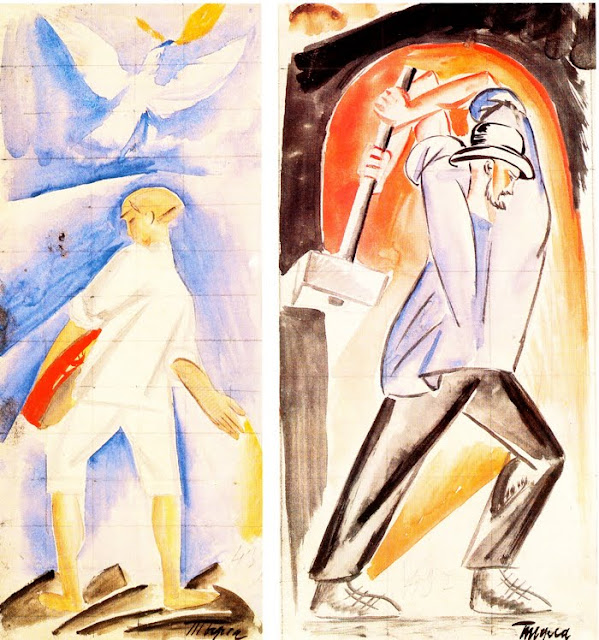 The ideas that emerged were rooted in different strands of social organization and utopian thinking from Russia and abroad. On the domestic front there were the traditional village communes, worker soviets, and longstanding traditions of nihilism, anarchism, and communism. in addition to Marx and Engels, international influences such as the Paris Commune and the Mexican Revolution inspired visions of a new social order. In city planning, Ebenezer Howard's garden cities (inspired in part by the Russian communist-anarchist Peter Kropotkin) played an important role. Popular science-fiction of the time uncannily resembled many of the city planning ideas circulating among politicians and designers. Writers invented elaborate visions of communal living, global unification, removal of gender hierarchies, new technologies, and even the reforestation of cities (see Revolutionary Dreams, by Richard Stites, for an interesting introduction to these writings in relation to city planning). 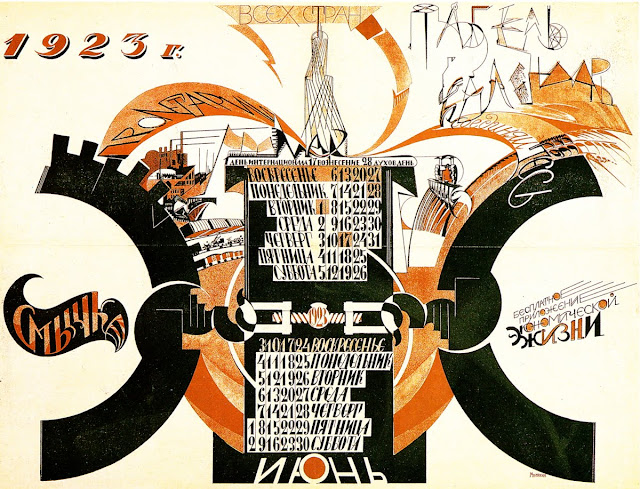 Calendar celebrating the unification of town and country, by Mizyakin, 1923.

The revolutionary government called upon artists and designers to help establish their legitimacy, sponsoring agitprop monuments, parades, murals, plays, and other creative works to commemorate and communicate their values to the masses. This work tended to be highly experimental, inspired by the European avant-garde as well as pride in Russian folk traditions. While many artists and designers aspired towards functional solutions to social problems, their work was most often refreshingly creative but impractical. 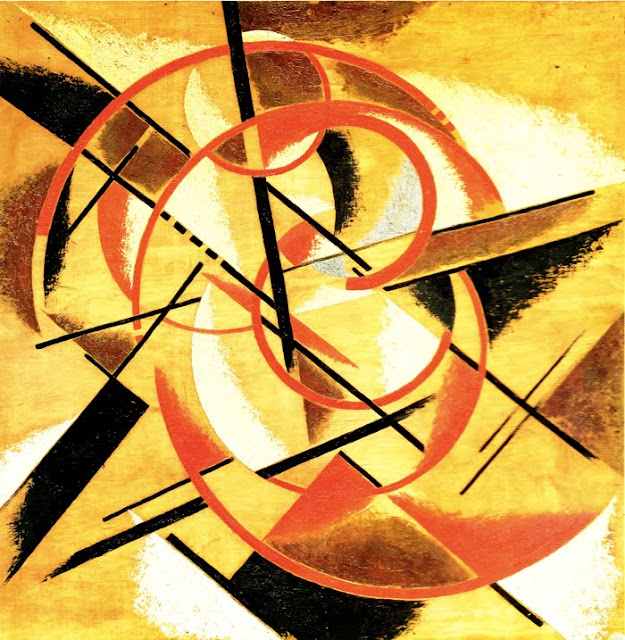 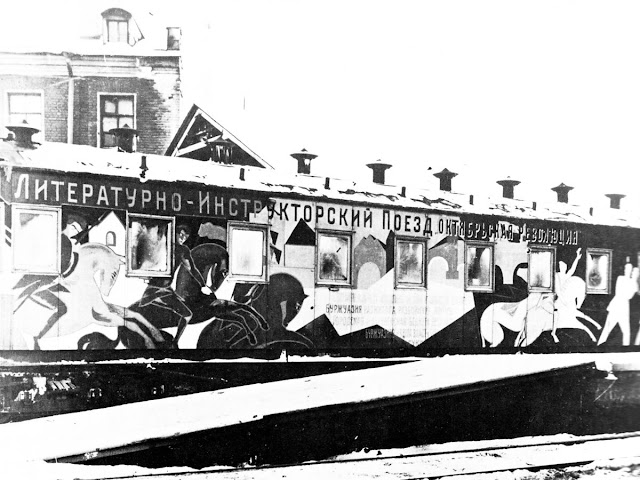 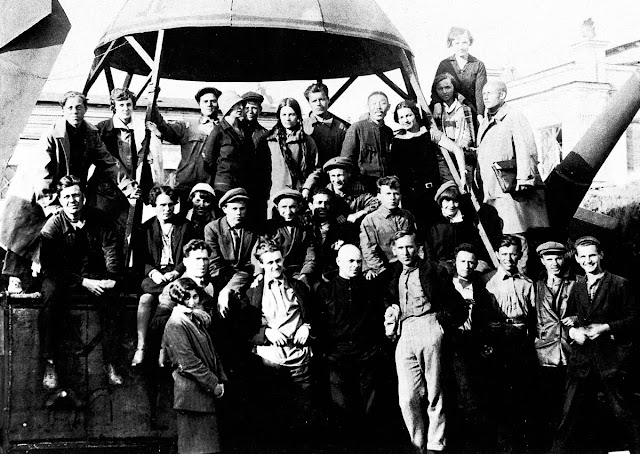 Art students and teachers working on parade floats at the VKhUTEIN workshops in Gorky Park. 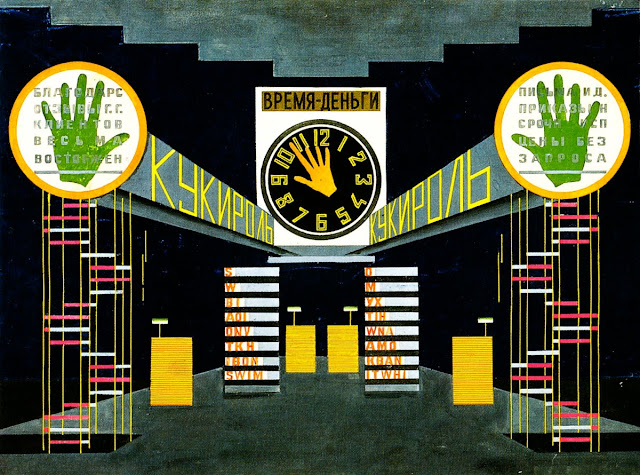 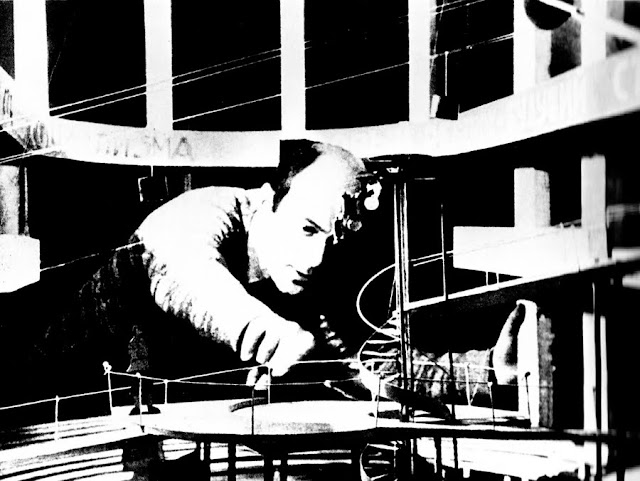 El Lissitzky working on a model for the theater. 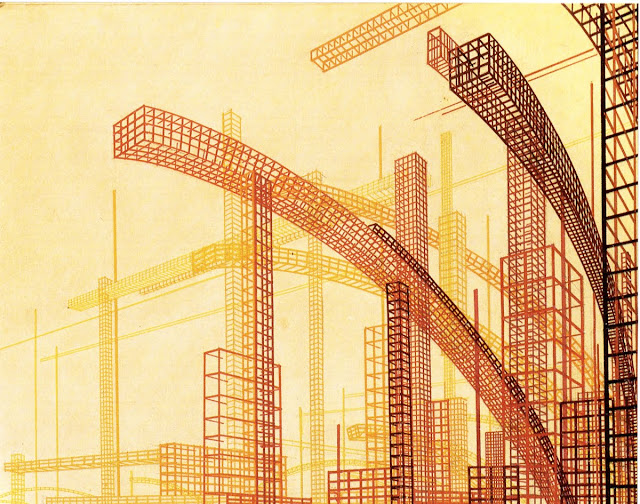 Fantasy No. 20 by Iakov Chernikhov.

VKhUTEMAS (the Higher Art and Technical Studios -- or VKhUTEIN when it became an institute) was established by government decree in 1920. Its purpose was to prepare students to apply creative skills toward the improvement of society, becoming "artist-constructors." It employed many of the most talented artists and designers in the country, and became world famous for innovative work and ideas. 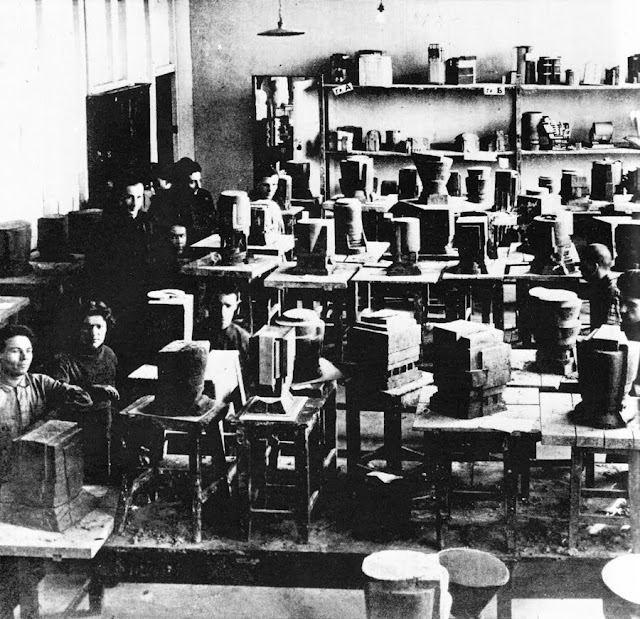 Exhibition of student work at VKhUTEMAS in the early 1920s. 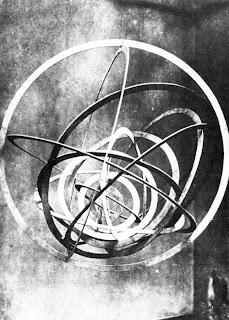 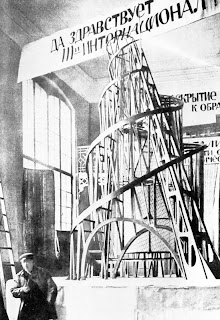 Architects took part in competitions to design monuments, buildings, and cities based on socialist ideals. Their submissions show an exaltation of new technology, communal living, public health, green space, and an egalitarian society. Famous designers from around the world (including Hannes Meyer, Ernst May, Mies van der Rohe, Frank Lloyd Wright, and Le Corbusier) visited or worked in Moscow during the 1920s and 1930s. They were drawn to Russia for the competitions, exhibitions, ideas, and often in support of the revolutionary cause. 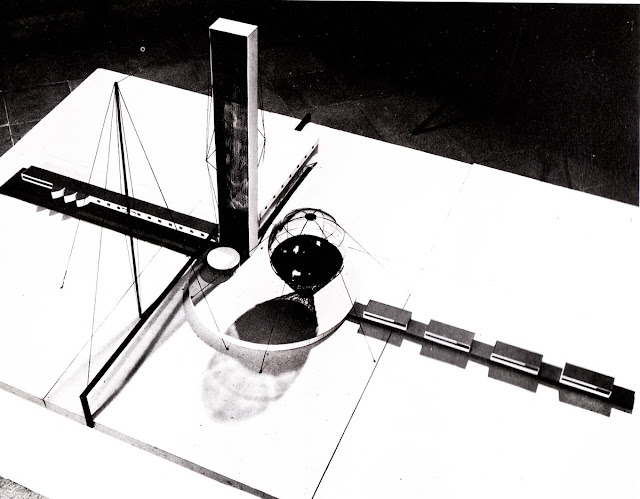 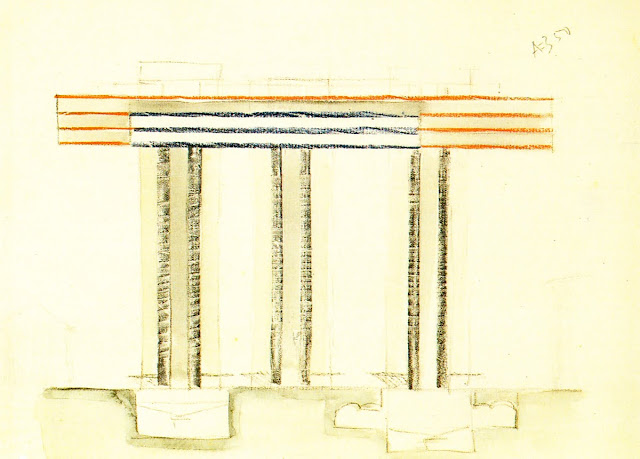 Sketch for a skyscraper near Nikitskii Gates by El Lissitzky, 1925. 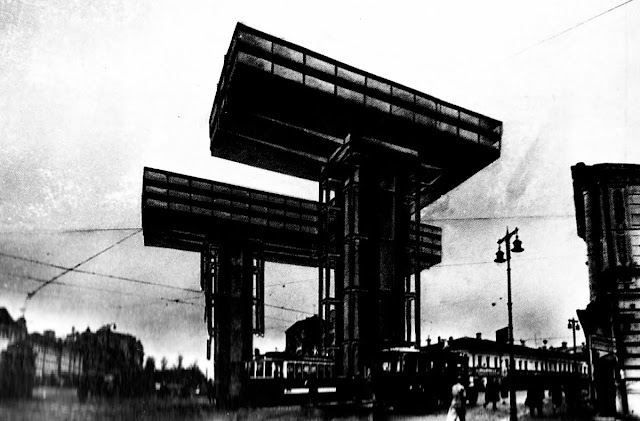 Photomontage for the skyscraper near Nikitskii Gates (see above). 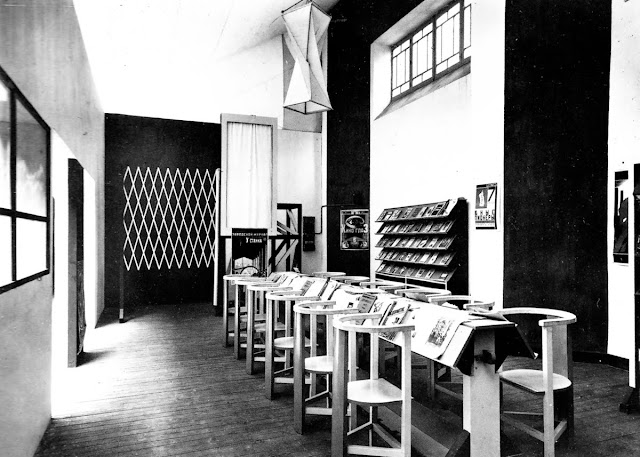 Interior of a Worker's Club by Aleksandr Rodchenko, 1925. 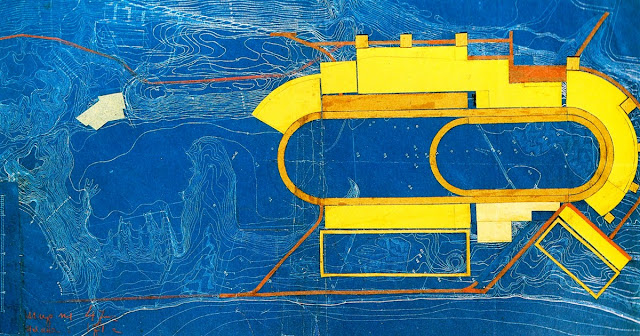 Plan for an international stadium by El Lissitzky.

Ideas for the socialist city are often described in terms of urbanist and disurbanist orientation. Urbanist plans are characterized by relatively dense Le Corbusian high-rise buildings set within seas of green space. Disurbanist plans are known for prefabricated houses dispersed along major roadways that traverse the entire country, calling to mind Arturo Soria y Mata's Linear City and Frank Lloyd Wright’s Broadacre City. The competition for a Green City outside Moscow provided an opportunity to further develop these plans. Although the city wasn't built, the entries showcased bold ideas for public green space circulating at the time. 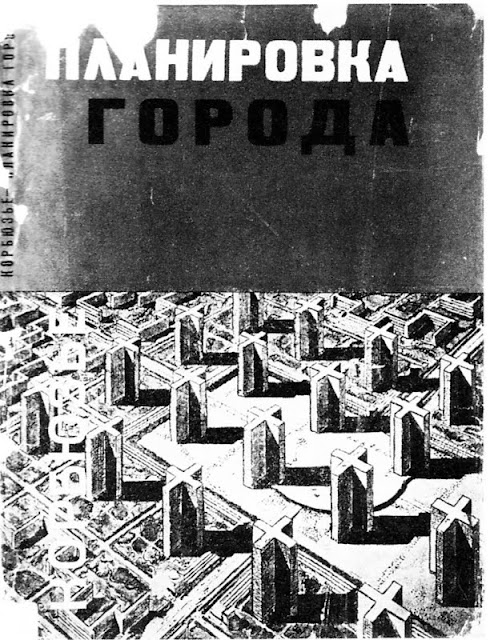 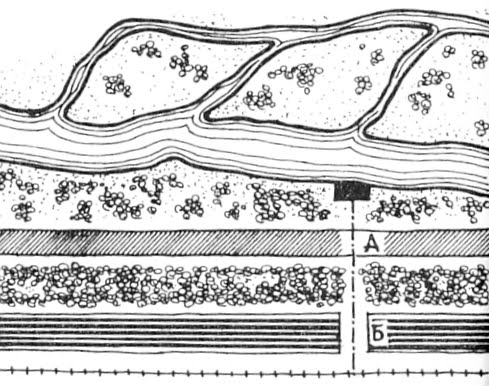 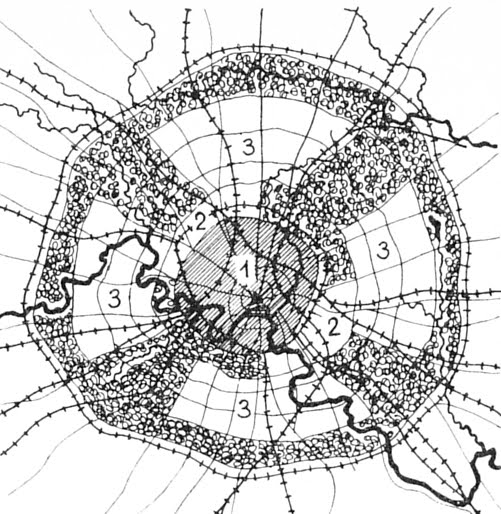 Sergei Shestakov's Plan for Greater Moscow, 1925. 1) Central region, 2) Industry, 3) Residential areas with green wedges in between. The city is surrounded by a ring of greenery and railroad tracks. 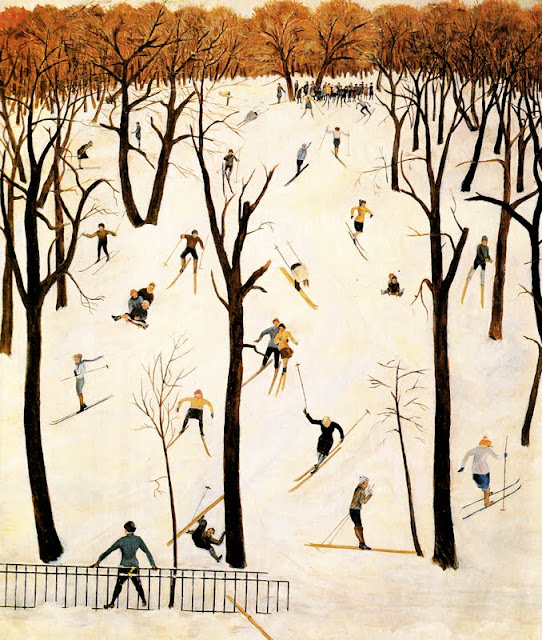 Skiers (Amid Trees) by Sergei Luchishkin, 1926.

The nationalization of land in 1917 paved the way for the establishment of Parks of Culture and Rest on former estates of the aristocracy. Gorky Park was first, established in 1928. Landscape design is notably absent in many of the experimental work of this era. Perhaps it was considered an aristocratic pursuit, or simply not as exciting as modern technology, or maybe I just haven't discovered it yet. Rooftop gardens and greenery surrounding tall apartment blocks were common in science fiction and plans for the socialist city. Buildings were linked by high-speed transportation, and greenery was used to buffer industrial zones. Thus while technology and industry seem to be the primary concerns of the day, ideas of safeguarding public health with greenery became enduring elements of Soviet planning. 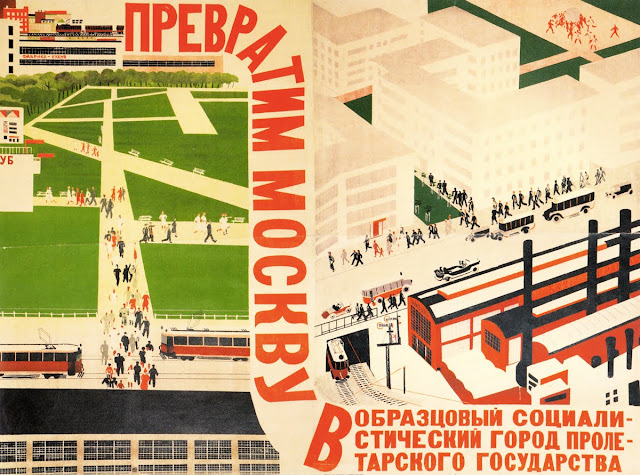 Transforming Moscow into a Model Socialist City of the State Proletariat by Aleksandr Dejneka, 1931.

After absorbing a small portion of the information about this period, I'm struck most by the amazing creativity, often didactic, patronizing, or insensitive stance of designers towards the people who would interact with new designs (for some reason the chairs in Rodchenko's Worker's Club come to mind), and the great potential in this kind of creative experimentation. It will take me some time to really take this in and hopefully find more information on the establishment of parks during this era. But for now I'll post this and hope that others might have some leads.