Mention Palma de Mallorca to most, and reactions tend to be complimentary. Located on a lovely island in the Mediterranean, about 200 km off the eastern coast of Spain, southeast of Barcelona and due east of Valencia, Mallorca attracts over 7 million tourists per year due to its average 300 out of 360 days of sun and excellent beaches, among other attractions. Almost half the island’s population of 800,000 lives in Palma, a tranquil city founded by the Romans in 123 BC with a picturesque historic core containing one of the most famous Gothic buildings in Europe, the La Seu cathedral.

Yet ask people living in Palma about an area in the city called Corea, a group of 26 buildings along Calle General Riera, and expressions will turn in aversion: this is a heavily labeled place no one visits willingly, known for its delinquency, drug use and social conflict among diverse ethnic groups amidst dilapidated buildings and streets. Even most living next door to Corea, in the wider neighbourhood called Camp Redó, openly express that although they live a few blocks away they never, ever come near this area, even during the day.

Due to its poor socioeconomic context and degraded urban fabric it has been highlighted as a priority area for rehabilitation, and a 4-year initiative began in early 2009 through an organisation called Consorci RIBA, where RIBA 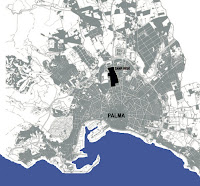 stands for integrated neighbourhood rehabilitation. The Consorci is a public entity, from Palma’s City Council and the Government of the Balearic Islands, in charge of coordinating an integrated rehabilitation of the most degraded areas of Palma, with multiple millions of euros in funding for the Camp Redó rehabilitation coming from these sources plus the European Regional Development Fund. Integrated rehabilitation in this context means that actions are not reduced to urban design interventions, but strive to simultaneously address economic, environmental and social spheres. 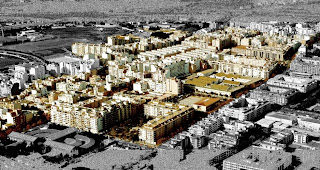 I began to learn about the project through activities in the latter sphere of intervention, as an architect friend working on the urban design component of the initiative invited me to a participatory walk with residents through the Camp Redó neighbourhood, organised by social workers in the social integration and equality of opportunity programme – the social branch of Consorci RIBA with 16 employees. I was impressed with the concept and the content of the walk, which involved stopping at five key areas in the neighbourhood, from the clean, main shopping street with broad sidewalks and bike lanes to the dirty, unkempt streets in the priority zone of Corea, and asking residents participating in the walk their perceptions of these areas, their feeling being in that particular urban space. This activity made up the last of dozens upon dozens of events over the year that engaged the residents of Camp Redó in a time-use study, the first of its kind in an urban project Mallorca, to understand how they distribute their activities during the day, from the domestic environment, their mobility, use of services as well as their perception of spaces in the area. The quantitative and qualitative information gathered during over the year will be used to recommend improvements the urban intervention in Camp Redó, the concept being to marry the urban with the social findings.

While the concept of urban renewal, regeneration or rehabilitation, no matter how ‘inclusive’ it claims to be, is often code for the displacement of marginalised 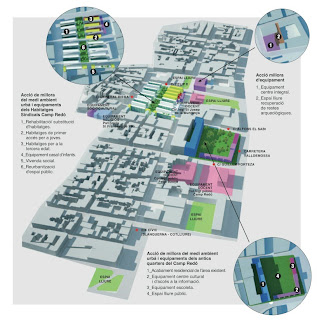 communities that inhabit the area and essentially gentrification, the Consorci RIBA urban intervention in Corea seeks to avoid this through various measures. First, owners (70%) of the flats in the 26 buildings in Corea can decide between selling their flat, obtaining an equal exchange of theirs for another flat in Palma or living two years in a ‘bridge flat’ as work is underway to rehabilitate the area. Those tenants with legal rental contracts will be provided alternative accommodation as the rehabilitation begins. There are many activities underway with residents through the economic development and work support programme and social integration and equality of opportunity programme, the latter including initiatives to create and strengthen neighbourhood committees, structures that did not exist to date, activities around coexistence, conflict resolution and neighbour mediation, and specific projects working with women and youth, who tend to be more affected by the challenges facing the neighbourhood. 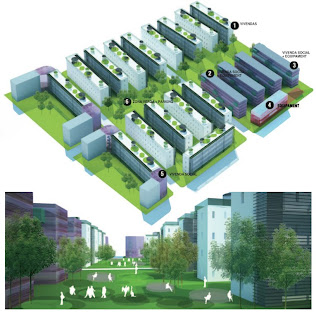 when taking an integrated approach to redevelopment. Engagement in this context was a meeting of the Consorci with various neighbourhood associations to get input on what was needed in the area, and the resulting information then given to the architects who drafted the proposed urban rehabilitation plans. The architect and plan selected and approved by City Council and the Government can be tweaked, but overall will look the same. This makes me ask how to appropriately balance process and product in urban rehabilitation, when there is a demand for the product up front, before meeting with residents and fully understanding their needs, but when truly integrating urban design with economic, social and ecological facets is fully dependent on process.

Learning more about the social component of the Consorci’s work in Camp Redó, however, gives me some hope for a positive urban regeneration process, as it was clear to me that the social workers are truly dedicated and committed to working with the diverse 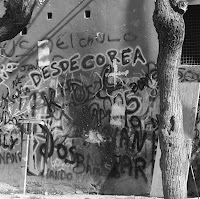 communities in Corea and surrounding areas to improve the lives and reduce inequities so blatantly present in this urban environment. The coming years shall tell how or if this integrated initiative evolves, as political realities unfold: while the urban design and rehabilitation work must be complete in 2013 due to EU funding deadlines, the government elections in 2011 might change or even eliminate the social and economic offices driving these components of the initiative. This, alongside other factors, will illustrate whether the area receives a superficial face-lift with deeper social and economic problems remaining, or whether a more integrated approach is taken.